On the 22nd of May, Lauren “Pansy” Scott, Sean Charles and myself got the chance to go and playtest Evolve at the 2K Germany offices and, after Pansy and I had been looking forward to it for quite some time, it didn’t disappoint. We got in about eight games that night, but I’m going to take you through one of the games that I played as the monster, the Goliath. To read about Pansy’s experience with the game, click here, or alternatively go here to read an account by ESLGaming.com’s editor in chief Johannes Schiefer.

I should point out that the first two games I played were on the side of the hunters as the Assault class. We won both of them, and then it became our turn to play the monster. Pansy and I were both a bit hesitant about trying him out because we didn’t want to get destroyed. I ended up playing him first, hoping I could rely on my previous Left 4 Dead experience. However, after playing on the hunters’ side and having teammates to back me up, I was really scared to be going up against four other people all alone.

As the Goliath, you have to choose where you want to allocate skill points. You have four abilities:

You’re only given three points, so you can choose between taking three abilities, maxing one ability or taking two abilities with one point in one and two in the other. As expected, by allocating more than one point to an ability, you make it stronger. 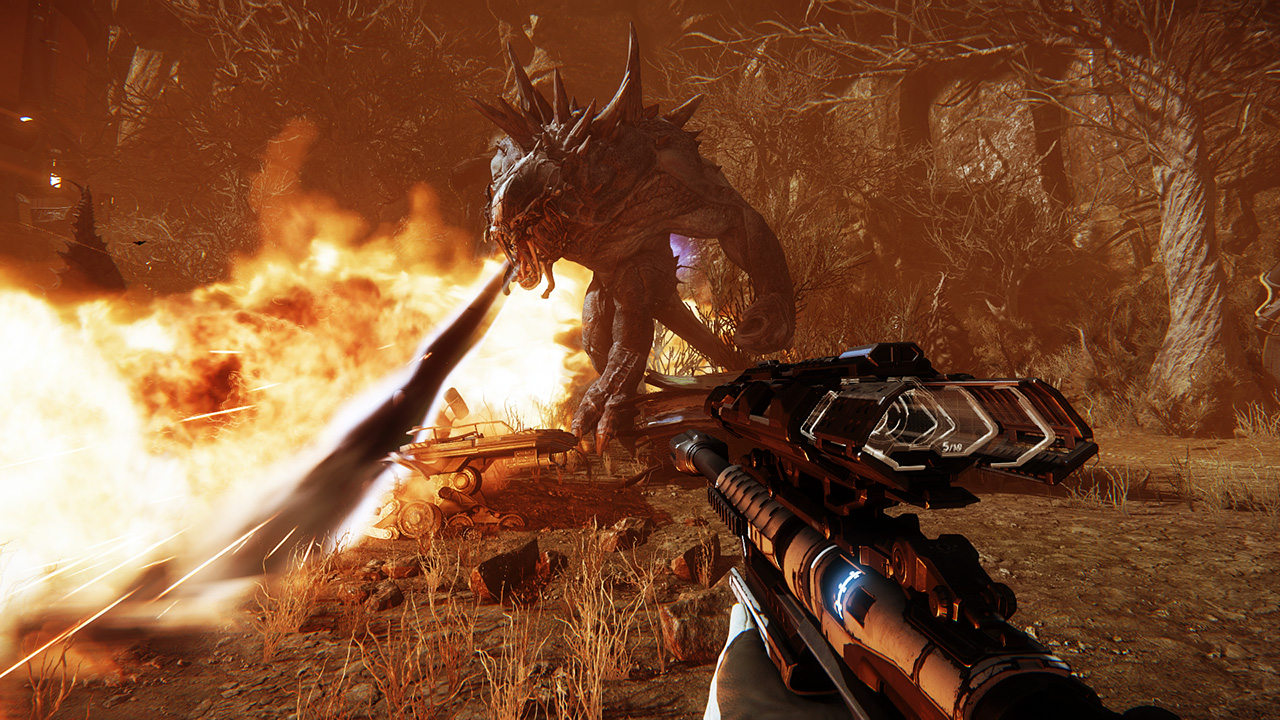 After you choose your abilities, you get a 30 second head start over the hunters. You would think that being this big badass monster means you wouldn’t feel vulnerable or afraid of anything. However, you immediately experience that feeling of “I need to run as fast as I can and get out of here”. The game follows a formula where, at stage one, the hunters are stronger. At stage two, the Goliath and hunters are more or less evenly matched. Finally, at stage three the Goliath is at the top of the food chain, and definitely a force to be reckoned with for the hunter team. As such, early on you have to run and hide if you want to last until stage two.

From the hunters’ side, the Goliath looked so agile and fast, but once you get control of him, you’re actually a bit clunky and slow until you figure out how to move properly. You can sneak so you don’t make noise or scare any animals around you as well as sniff and sense where the hunters are. In my opinion, the best thing you start with as the monster is the jump. You’re given three charges of it that recharge over time, but if utilized properly you can cover the entire map very quickly.

During these 30 seconds of free time at the start of the game, you have so many decisions to make. You have to decide where to go, which animals to kill and consume so you can evolve and what strategy you want to use to win the game. However, being an avid player of Left 4 Dead and decent at the Tank, I had a good idea of what I wanted to do.

Once the game started, I took three abilities: Rock Throw, Leap Attack and Charge Attack. I wanted to run a very high mobility build to be able to get in and out of fights very fast – the map caters to guerrilla-warfare-style attacks so you can catch the hunters off guard. I started off by pushing out immediately for some animals to consume so I could evolve to the next rank. Funnily enough, as it was my first time it was actually hard to catch up to them without Flame Breath. 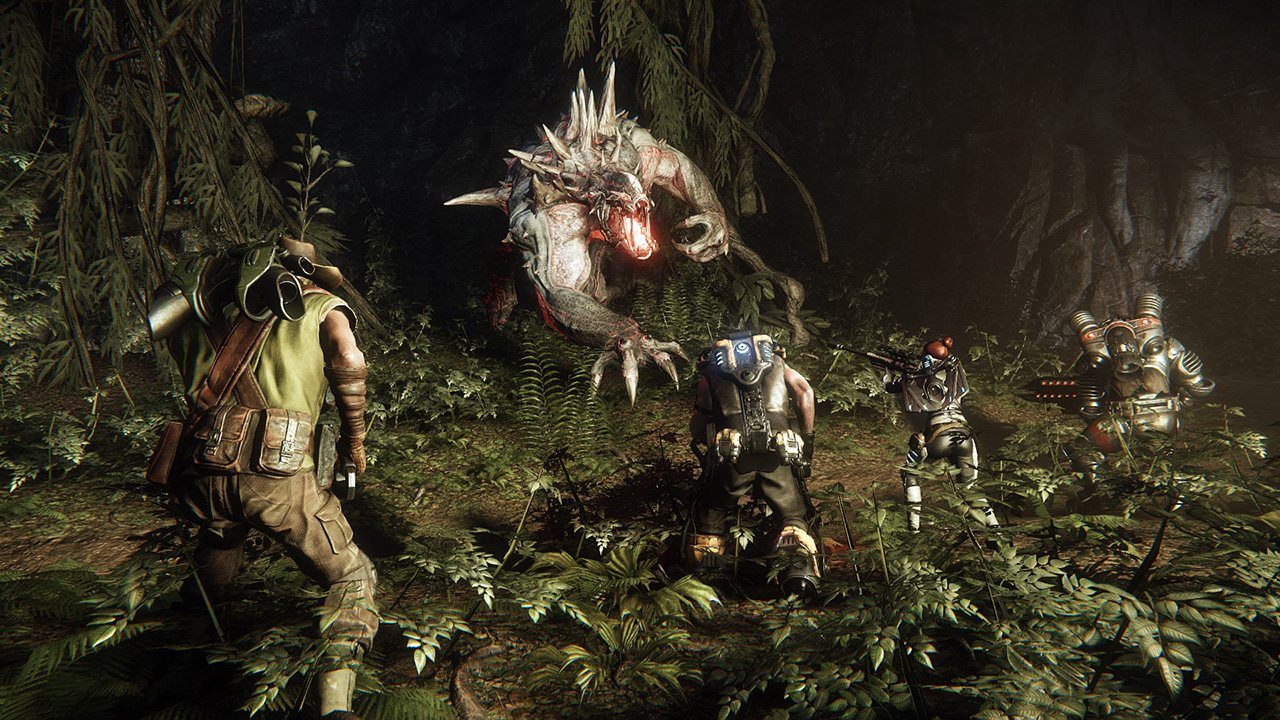 Eventually I got to stage two and was chased down by the hunters. A fight broke out as trapped me in the Trapper’s mobile arena. Noticing they were grouped close together, I decided to use a Leap Attack to jump straight onto them and spread them out. The damage this ability does is insane, but it’s also hard to aim at the same time. Once I got some distance and used the smell ability, I was able to see where the hunters were. Using these two abilities together, I was able to use Rock Throw to my advantage, and after I had incapped one or two of them and the mobile arena had fallen, I decided to run away to hit stage three.

By the time I was finally able to get away from the hunters, which was no easy feat, my adrenaline was pumping. The fight’s so intense because you’re this giant monster who feels like a raid boss in World of Warcraft – you soak up so much damage and the hunters are afraid of you. It helps that I was in a room with the players and could see them freaking out as I switched from target to target. Every single ability you land feels rewarding as you see the hunters getting knocked around like ragdolls in a tornado. For being in only alpha, the game felt ridiculously smooth and well-polished.

So, back to running away and going for stage three: I ended up finding a couple of animals in the jungle that had a special icon above them. By killing and consuming these, you get special passives. For instance, in this game I ended up getting increased smelling ability and cooldown reduction, among other things, these cool little buffs helping you to situationally adapt your strategy as you go along.

After getting the biomass I needed to hit stage three, I ended up getting caught out by the hunters again. Then came my biggest mistake of the match: I hit the wrong button and started to evolve in the middle of the hunters. This is where the largest chunk of damage was done to me – while you’re evolving, you can’t do anything for about ten to fifteen seconds. When you get out of your cocoon, you’re given the ability to allocate three more skill points that you can use to rank up abilities or unlock others. I ended up putting the points into my rock throw, leap slam and charge attack. 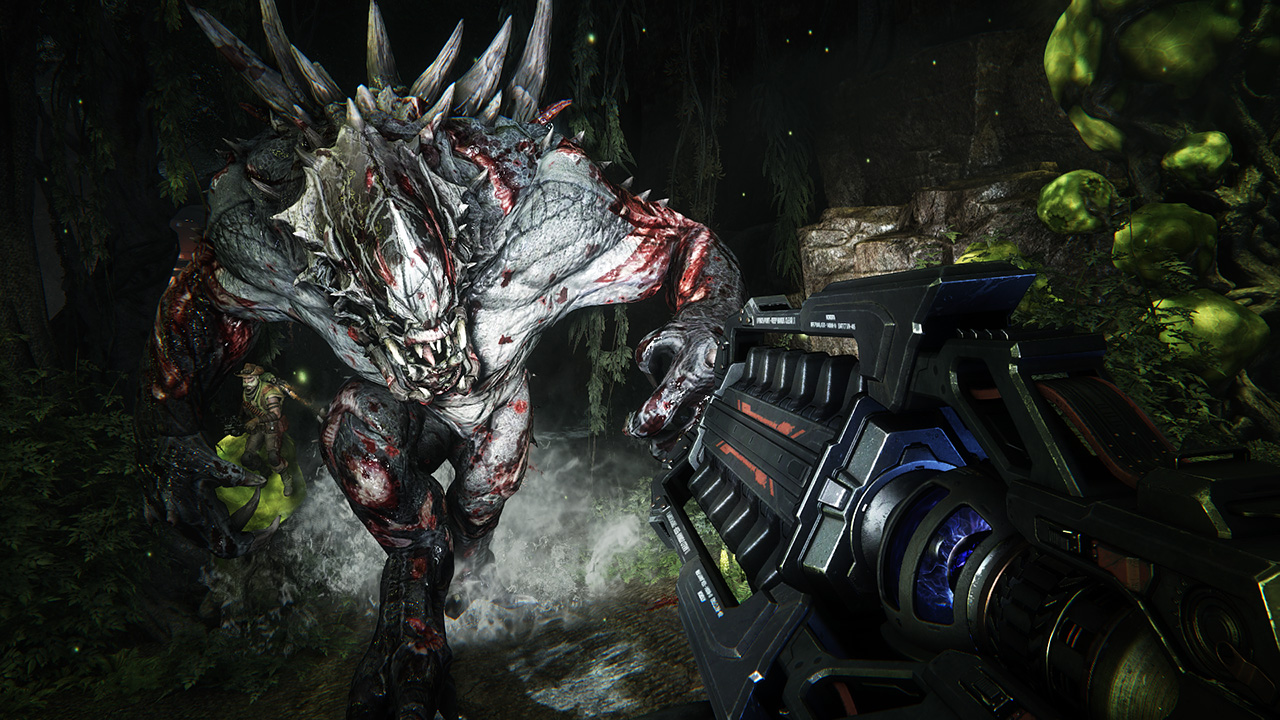 While all this was going on, Pansy decided to use her Support special ability Orbital Barrage. This allows her to place a marker that calls down a rain of missiles onto one location, and in this instance, the location was me. I only took about 8% damage from this ability because luckily I had a lot of armor that hadn’t been shredded yet. I was freaking out because I was being focus-fired by the four hunters, but once I got out of the cocoon I could just feel the extra power that I had gained.

I rained havoc all over the entire field, constantly leaping on top of them, throwing rocks and, if they were out of range, charging into them to close the gap or gain some distance. The damage I was taking – well, they couldn’t do much because I had spread them out and forced their Assault away from the group. By constantly switching targets, they couldn’t really synergize their kits, and could not gain full control of me. I ended up downing them one by one and winning my first game as the Goliath.

Sadly, I truly cannot do the game any justice in written format because it was an amazing experience. It was everything I had hoped it would be and more – finally I have a game that I can look forward to and be excited about. This is all without even touching on the potential competitive aspect of it. 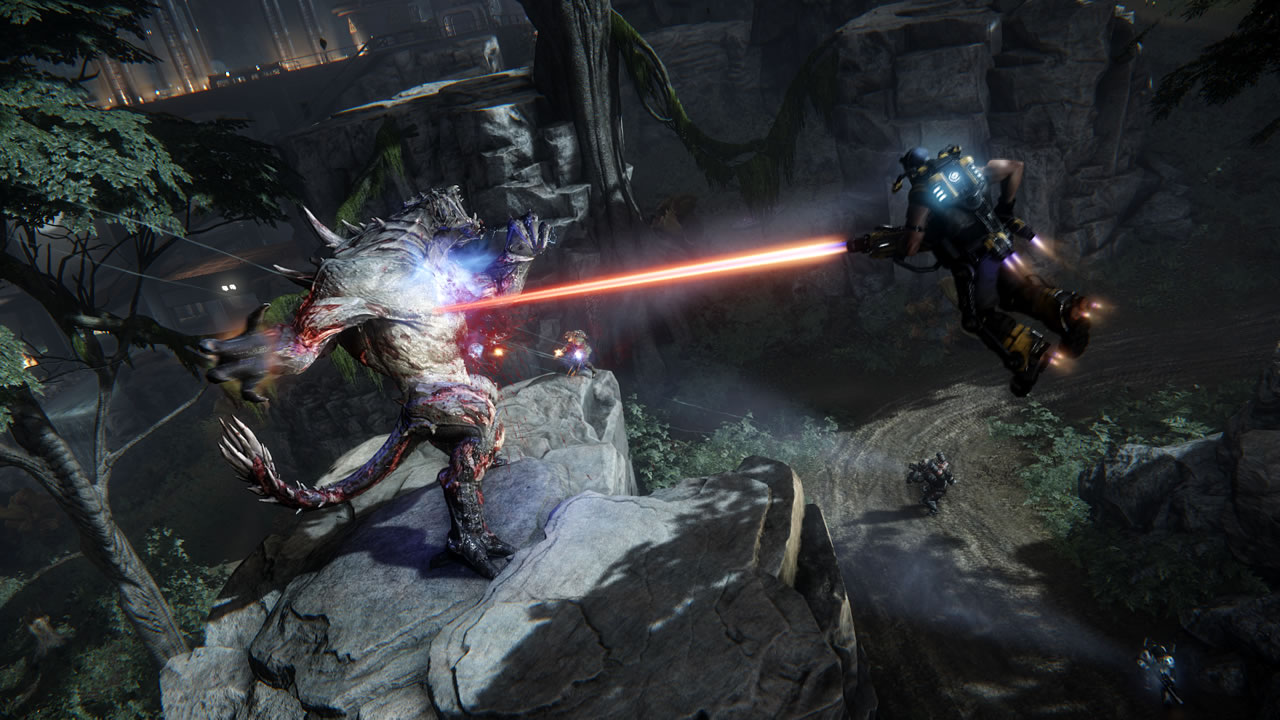 I want to save the possibilities for a competitive side of Evolve for another article as there is already a huge wall of text to be written about this, but I can see a lot of potential. Knowing that Turtle Rock wants to see this game go competitive and is really listening to the ideas of the community in improving it for that purpose, I have high hopes.