We managed to snag an interview with some of the newest competitive Dota players in the scene. ESL One New York was Ush and whiteBeard’s first ever trip to a LAN event. We spoke to them and FLUFFNSTUFF about how they found new blood in the NA Dota scene, how they prepared and their road to next year’s International.

ESL: Hi, guys! So this is Ush’s and whiteBeard’s first LAN event. Tell us – how old are you guys and when did you start playing Dota?
Ush: I’m 18 and I first started playing two and a half years ago.
whiteBeard: Haha, are you serious? I was playing Dota 1 in like fourth grade because my brother was four years older than me and I just did whatever he did. So when I saw him playing Dota, I just asked “Yo, what are you doing?”

ESL: Was there ever a point where you realized you could play competitively?
Ush: I’ve always been competitive by nature, so when I started playing, even when I was bad, I was always working towards getting better. It wasn’t because I wanted to become pro – I just didn’t want to suck. But eventually I got really good and when I watched TI2, it really inspired me to join amateur teams and stuff like that.
whiteBeard: I started trying to get into competitive in HoN – it wasn’t really Dota 2. Like before HoN, I didn’t really know that people played games professionally and shit. HoN was my first introduction to eSports, I guess, and where I first started trying to get better, then I eventually just went to Dota 2 with it. 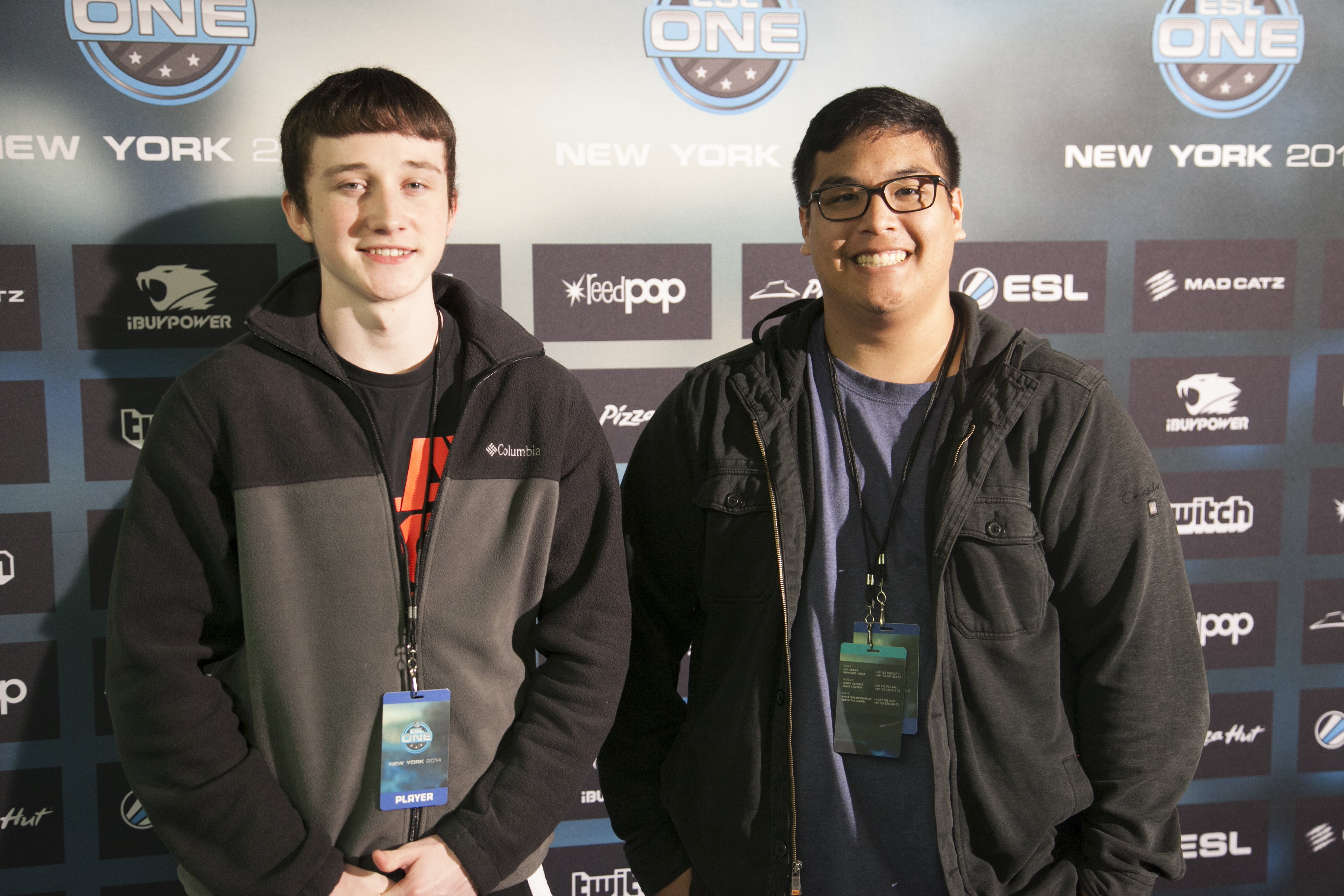 ESL: So how did Ush and whiteBeard make it into the competitive Dota scene?
FLUFFNSTUFF: Mike found Ush and then I joined their team. But I had been watching them for a long time and I knew that Ush was really good, so I was trying to encourage him from the back. But I found whiteBeard in HoN and I thought he was really good, added him, and played with him a lot. And I found out he lived really close to me, so we had that connection, and he got better over the years and I thought he was ready at this point.

ESL: As we said, this is Ush and whiteBeard’s first LAN – did you guys have any nerves coming in? What did you expect?
Ush: I thought I would be a little nervous but when I got on stage it was just like playing at home. I wasn’t nervous at all, actually.
whiteBeard: The nervousness wasn’t really an issue – it was more like the setup felt different for me. It wasn’t like playing at home.

ESL: On the other hand, the rest of the team has quite a bit of LAN experience. Did you guys try to help prepare Ush and whiteBeard for a LAN setting?
FLUFFNSTUFF: Well, we tried to let ‘em know from the get-go that they had to be ready to import their settings. But whiteBeard didn’t get the memo – he was not prepared. Travel became an issue as well – Ush had never been on a plane before. I even wrote him a step-by-step guide on how to get here from the airport. But yeah, we also let ‘em know that once you’re on stage, nervousness is not a factor. It should be just like playing at home. I think the biggest lesson we learned here was that there’s a lot of waiting and you have to be ready for long days and manage your time. I mean, we got here at like 10am and ended up playing our games 12 hours later. 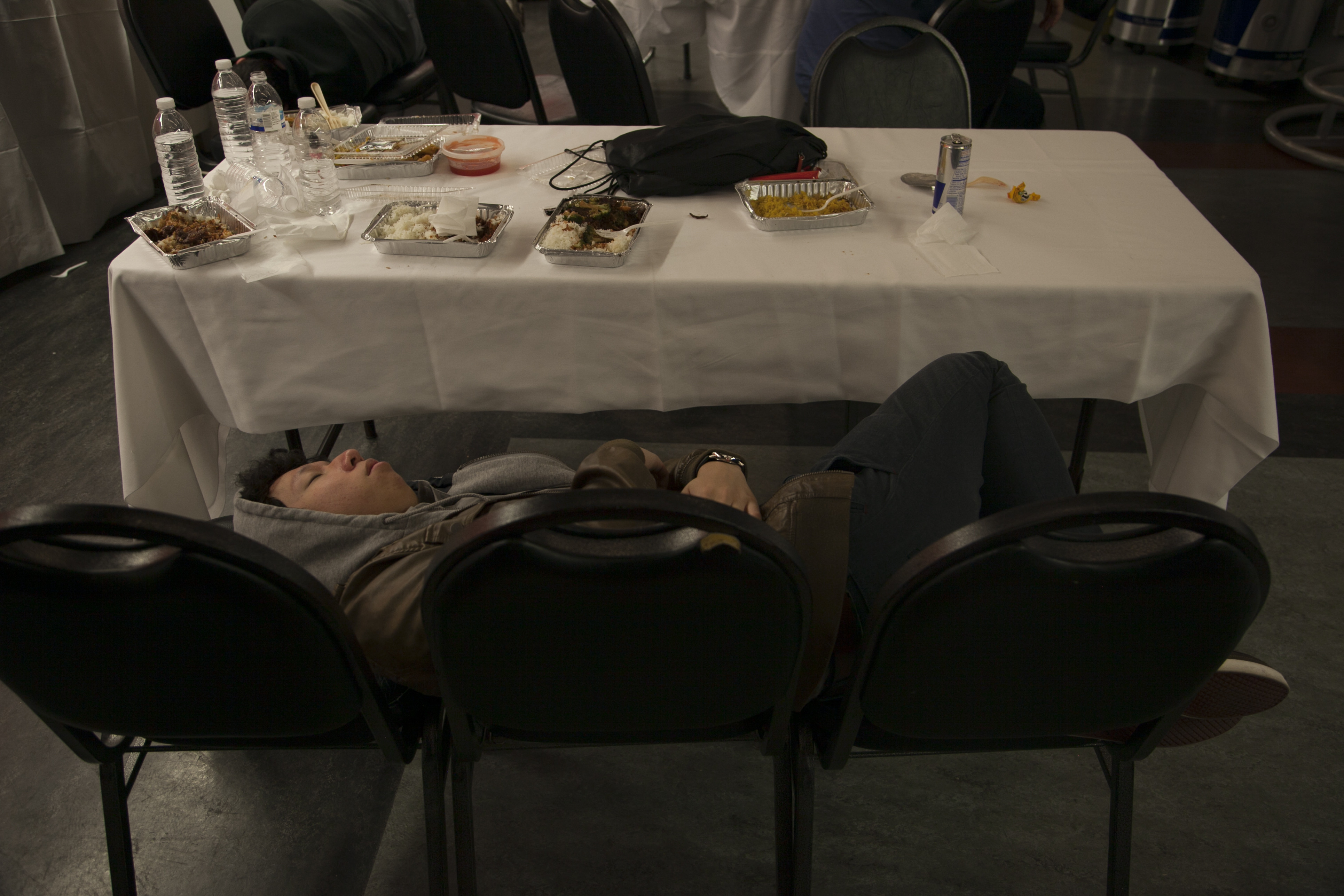 FLUFFNSTUFF takes a rest before SNA’s match against Cloud 9

ESL: Obviously you guys exited the tournament a lot earlier than you would have wanted, but how did you feel about your overall level of play?
FLUFFNSTUFF: We actually felt really confident. We had a few good scrim sessions, we won a few tournaments beforehand, and everyone seemed to be on the same page. Overall, though, since it was single elimination we didn’t get a chance to show our best performance. We got mindfucked a little bit after game one. We all thought we outpicked [Cloud 9] – we had a lineup we were super comfortable with and had practiced with a lot. We felt really good even when we were down 10-15 kills – everyone believed we could have won. That’s really the mentality we brought into this event but didn’t get a chance to showcase it.
Ush: I mean, I wasn’t completely positive we could beat them. I knew that they could definitely beat us and that we could beat them as well. I’m not gonna say I felt 100% but I felt more confident than I usually would. But I mean they’re a really good team, and you make a few mistakes or mess up the draft a bit and you just lose. And it was single elimination, so…

ESL: How do you guys feel about the single elimination format?
Ush: For the players, it’s not very good, but I can see how the fans would like it since every game matters a lot so each game gets really hyped. But for players, you want more than two games. You want at least another chance.

ESL: What does the future hold for SNA? Did you guys enjoy your first LAN experience?
Ush: Yeah, it was fun. It was exciting and I liked playing here a lot. As for a team, we’re gonna stick together for now. We’ve also talked to sponsors but haven’t got one picked out yet. We haven’t sealed anything, but we’ve talked to them.
FLUFFNSTUFF: It’s really fun here because it’s inspiring to see players you play with all the time get to the level they’re at. Like I want to be where ppd is at – sitting at the grand final with everybody chanting. I just want that feeling. 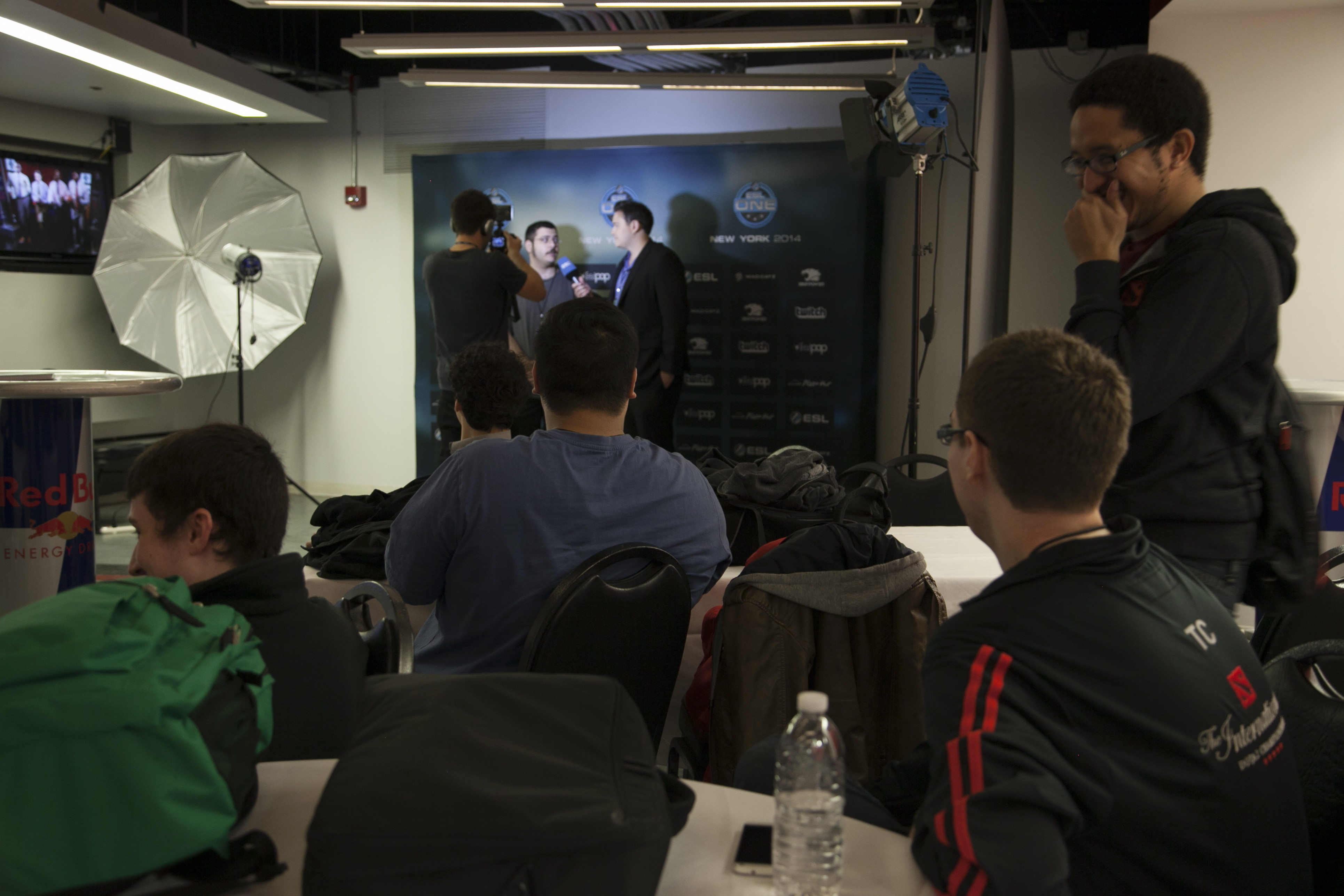 SNA giggle as ixmike88 is interviewed by SirActionSlacks

ESL: So let’s talk a bit about NA Dota. It’s definitely one of the younger scenes compared to other regions, and the general consensus seems to be that there is a smaller talent pool in North America. Do you guys agree with that?
whiteBeard: I agree with that.
Ush: Yeah, there’s way less top tier players than in Europe or in China. Even the players that are really good all have some sort of problem – either school or work, or they don’t want to commit, or just bad attitudes and they don’t know how to compete.
FLUFFNSTUFF: It’s a cultural thing. It’s not easy for someone to want to take this path, even if they’re good. I remember I was listening to this Kasparov lecture – a chess grandmaster – and he was explaining why Russia is better than other countries at chess and he was saying it was because of the culture – they want to have all the kids go through a process to see who is the best. In the US, it’s more like a free-for-all where players just come in to see if they’re good enough to try. We don’t really have a big pool of players to pick talent from.

ESL: whiteBeard, you are actually half Filipino. Do you follow any Pinoy teams?
whiteBeard: Well, I played with NinjaBoogie in HoN with Duskbin. It was an all-Filipino team, too. It’s nice seeing them in Dota now.

ESL: Do you think you’ll ever see them compete on an international stage?
whiteBeard: It’s hard to say – the SEA teams are just isolated. They just play with each other so it’s a slow process for them to get better and it just isn’t working out. 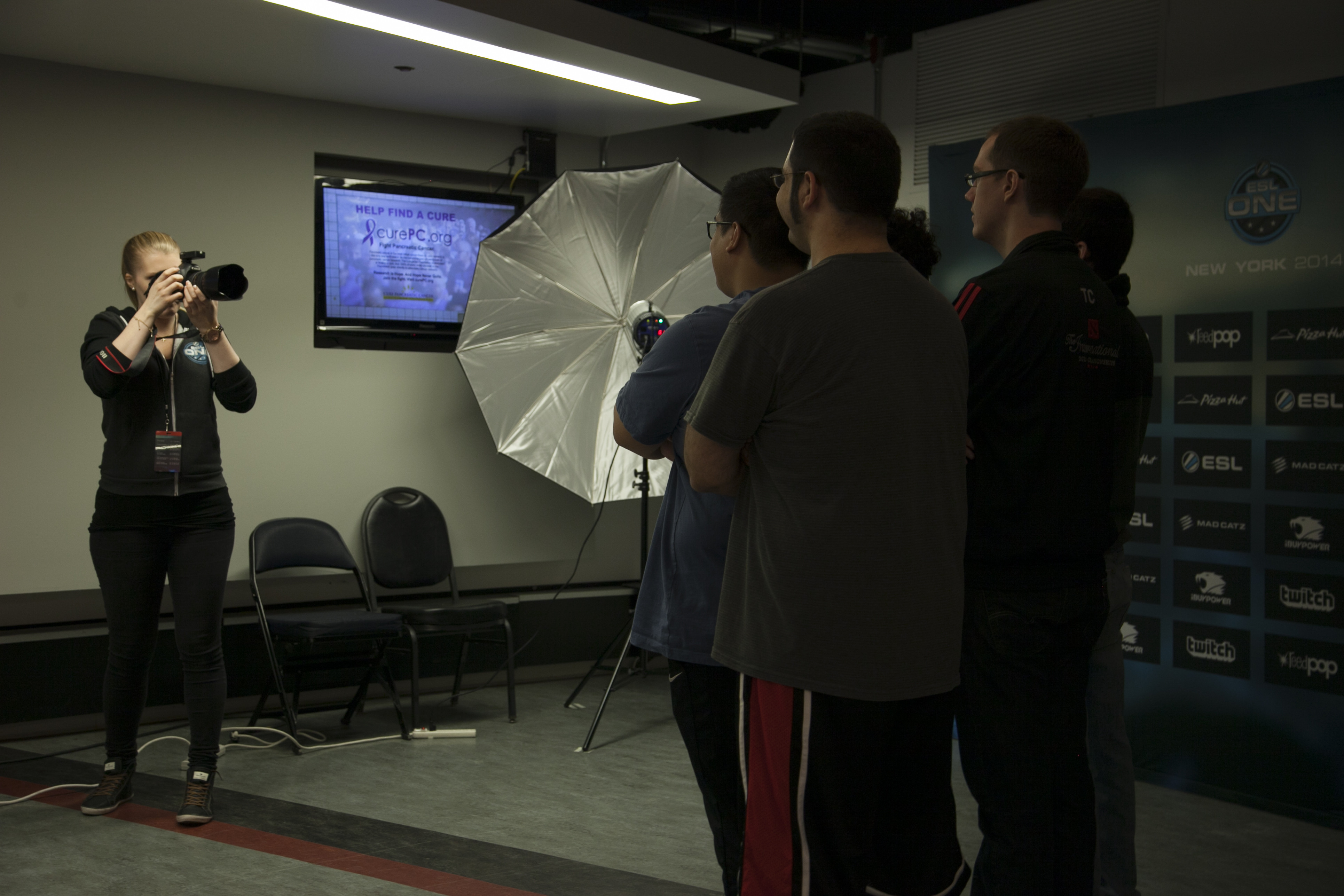 SNA getting their team photo taken

ESL: Do you guys think you have a legitimate shot at reaching this year’s International?
FLUFFNSTUFF: Yeah – it’s the goal for every team but especially us, and I think it’s not unattainable. I don’t even think I can fail to go because we’ve done it many times before so the process is there and we know the steps to take. It’s just about proving ourselves internationally.

ESL: Ush mentioned he was inspired to play competitively by TI2. How about you, whiteBeard?
whiteBeard: I watched the first one – that’s how I actually moved on to Dota 2. It was talking with FLUFF, too, when he was heading to TI2 with compLexity. It really did motivate me a lot to start playing Dota.

ESL: What was it like for you to meet some of the players here?
whiteBeard: It’s really weird, ‘cause you see them all the time on Twitch in big tournaments but when you’re sitting next to them, eating with them, they’re all just normal people. It’s pretty different.
Ush: It’s pretty cool to meet up with the all the people you play with online and scrim with and stuff. Seeing them in real life is pretty different. Everyone’s just so nice to you. There’s no flame or anything – everyone’s just friends. It’s nice to get away from the online world, because people can talk bad about each other and stuff like that. It’s definitely more fun in person.

ESL: What is your practice schedule like?
FLUFFNSTUFF: We were in the process of switching up our practice schedule. Initially we would play a couple hours every day at a scheduled time. Now we’re doing things more dynamically. We want to practice when we know that we can improve something. We want to make sure we have a strategic plan instead of just going hero by hero. When you do that, it can get quite exhausting because of the amount of games. So we’re experimenting with a lighter schedule and it seems to be working.

ESL: So how much of your practice is theorycrafting as opposed to actually practicing the mechanics?
FLUFFNSTUFF: I think we spend probably three times as much time theorycrafting than we do playing. The reason why is because it’s really important to have good ideas because you can just straight up lose if your draft is terrible. 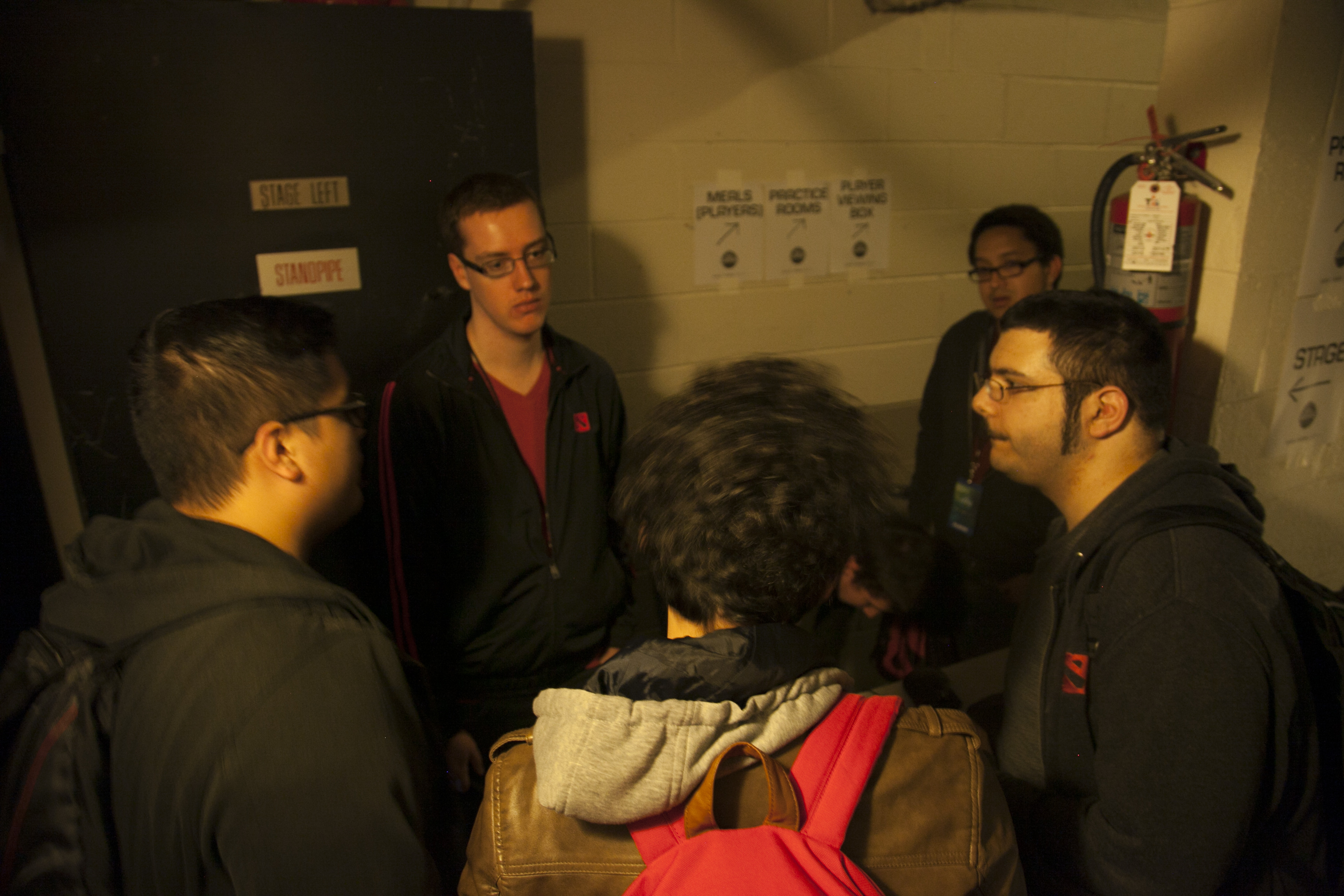 ESL: Is most of the time spent reflecting on your own play or on other teams’?
FLUFFNSTUFF: It’s mostly about our own ideas and experiences, what we think and feel is strong, and what our strengths are as players.

ESL: Well, did you guys see enough of New York City while you were here?
Ush: Well, we walked from our hotel one night, which was a couple miles away, just looked at all the tall buildings. It was pretty cool, but there’s just so many people. People are walking around at all times of the day – at 3am there’s like millions of people just running around.

ESL: Any last words about ESL One New York?
Ush: I liked it but we lost.

ESL: Shoutouts?
SNA: Shoutout to SNA and our future sponsors!

ESL: Thanks for taking the time to speak with us, guys!

As well as checking out yesterday’s interview with Sneyking, don’t forget to read through our other interviews with the talent and players from ESL One New York as well as our other post-event coverage: