Gamescom 2014 has come and gone. Records were broken, plays were made, victors got crowned and losers were consoled. For League of Legends, gamescom was the scene of the EU LCS Playoffs and the International Wildcard Qualifier, with four of the sixteen participants of the League of Legends Season 4 World Championships to be decided there. In this article, I’ll be giving you my perspective on the events and their outcome.

Gamescom isn’t just about the big names we all know from the LCS – it’s also about recognising new and/or unknown talent and giving them the chance to shine. The International Wildcard Qualifier (IWQ) embodies that spirit of opportunity. It sets the stage for teams from three of the lesser known League of Legends regions and gives them a shot at going to the World Championships, where they can represent their region for the whole globe to see. The teams taking up arms at gamescom this year were Legacy Esports from Oceania, Dark Passage from Turkey and Russia’s Russian Force.

In the IWQ, these teams first faced each other in a best-of-one round robin, with each team facing the other teams twice. It quickly became clear that Russian Force, featuring former Gambit Gaming substitute Darker in mid, were down on the power curve compared to the other two teams. They didn’t manage to win a single game in the round robin, while Dark Passage and Legacy Esports exchanged blows and went 1-1 in the head-to-head and 3-1 each overall. One of these two teams would qualify for Worlds, and in the best-of-five finals, Dark Passage allowed no opposition: they took down the Oceanian aspirants in a clean 3-0 sweep. Mid laner Naru took a leading role in this victory. Going 10-1-2 on Zed in game in game two and 6-0-0 on Fizz in game three, he slew the enemy team in stylish fashion. Future opponents beware: do not give this man an assassin.

Dark Passage will be heading to Worlds, but a question arises: will they be able to make a dent there? Last year’s IWQ winner GamingGear.eu only won one game out of eight in the group stage – can and will Dark Passage do better? Their performance at gamescom is nothing to brush aside lightly, but the competition and pressure will be a lot higher when facing the best teams on the planet. Worlds is their oyster, and we’ll have to see whether or not they can wreak some havoc.

In a previous article, we took a look at the EU LCS semifinals and finals that were yet to be played at gamescom. Fnatic’s LoL team had a reputation to protect as eventual LCS victors, similar to that of Germany in football. ROCCAT put up a serious fight against them in the semifinals, but in the end it was not meant to be. Fnatic were the first team to qualify for the finals and on their way to repeat history and take home the trophy once more.

Superteam Alliance took a 3-1 win over SK Gaming in their semis, thus securing a spot in the finals and avoiding the winner of the LCS Summer Split be decided in an El Clásico – I’ll leave it up to you whether that would’ve been a good or a bad thing. Froggen and Tabzz both gave dominant performances, thus re-emphasizing Alliance’s dependency on their carries. Tabzz in particular died only once in the entire series, boasting an incredible KDA of 44 over the course of four games. Despite their solid picks, SK never really managed to make a fist against the Superteam, and fell to their onslaught.

Alliance take the win over SK, in part due to Tabzz’s impressive 44 KDA

As Fnatic and Alliance prepared for the finals, SK Gaming and ROCCAT had to face each other in a battle for third place – there was still a spot at Worlds up for grabs, and the team who won this match would claim it. The ROCCAT we saw playing and putting up a fight against Fnatic the day before was not the same team we saw in this matchup. SK Gaming swept the series 3-0 as they did against Millenium in the quarterfinals, with pretty low scores in terms of KDA but deadly efficiency. A well-deserved win for SK, and they will be going to the World Championships once more after a one-season hiatus.

The two teams fighting it out in the finals would be the numbers one and two to make it out of the split: Alliance and Fnatic. A dream final for most, and also the most likely scenario when looking at the results of the Summer Split. Would Fnatic take yet another LCS title or would the Alliance top dogs seize the momentum and claim the crown? 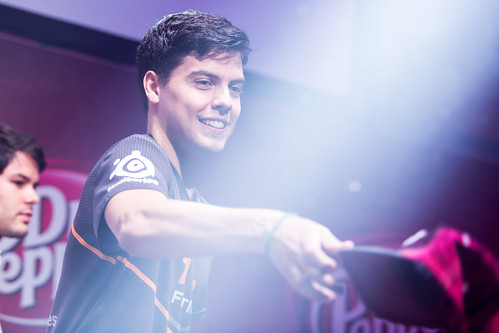 Fnatic’s xPeke at the DrPepper Allstar Tournament, also at gamescom

In game one, Tabzz on Kog’Maw managed to get rolling early on with a kill and tower takedown, and kept on going ever since. In yet another deathless game for him, ending in a 8-0-7 KDA, Alliance takes the first round after 38 minutes. Game two goes along in a similar fashion, but this time it’s Froggen who picks up steam and never lets up. He really seems to fancy playing AD Tristana mid and makes good use of the little Yordle’s pushing power. Their assault gets stunted slightly as Rekkles manages to pick up a triple kill on Lucian around the 20 minute mark, but Alliance secure the win through their vastly superior siege potential.

In game three, it’s do or die for Fnatic as they have to win the next three games in a row if they still want to the title. They most certainly deliver, with Rekkles on Tristana this game, ending 10-0-6 and with a whopping 405 CS, and top laner sOAZ on his all-time favorite Lulu, scoring 4-1-11 and 305 CS. Alliance do their best to get their carries rolling, but it is to no avail as Fnatic take game three, bringing the score to 2-1 in Alliance’s favor. Deciding not to let Fnatic take any momentum after their game three win, Alliance come out storming in game four. They fake a lane swap with Wickd on Alistar going bot lane but with Nyph and Tabzz sneakily hiding in the brush. Their cheesy tactic pays off as Rekkles goes in to face check only to get CCed and taken down for an early first blood. Meanwhile, Froggen on Xerath does work on xPeke’s Ziggs. The game is very close on terms of gold until around 27 minutes, where Alliance turn a tower push from Fnatic into a 3-0 exchange in their favor. They turn that small win into objective control and a gold lead, and snowball the game from that point on. There’s no stopping the Alliance now, it seems, and they take the hard-fought game after 39 minutes.

The hand-picked by Froggen, ‘created to win’ Superteam of Alliance beat Fnatic 3-1 to claim the LCS trophy and a well-earned number one spot for this split. Now they will be representing Europe at the World Championships alongside Fnatic and SK Gaming.

What were your favorite plays of this past gamescom? Do you think Alliance is a worthy winner? Would you rather have seen another team go to Worlds, or is this the best possible European delegation we’ve had in years? Let us know in the comments below!