For some time, ESL Hearthstone competition took the form of smaller weekly cups and the prestigious NESL preseason tournaments. Every Sunday and Wednesday, the best players in the North American server region would meet and battle it out for valuable preseason points and cash prizes.

Now the preseason is finally over, the winners have been rewarded and ESL is embarking on a new chapter of Hearthstone competition: the ESL Legendary Series. For the next three months, players will square off every Saturday for ranking points and honor, with the best of the regular season to go all the way to Burbank, California, to be part of the first ever Legendary Series Championship.

As Hearthstone still struggles to find a perfect balance between invitees and an open qualifier format, the Legendary Series attempts to provide a variety of competition. For the debut event, four accomplished and well-known players received an invite, with the two best players from the preseason rankings also eligible as well as two players from the Sunday Challenger bracket.

This made for an interesting mix of known tournament players, like DreamHack Summer 2014 Champion Rdu, and more unknown talents, like Supernova or Pinpingho, and not only created new storylines but also contributed towards helping to determine the best possible format for future Hearthstone tournaments.

Pinpingho especially made good use of the spotlight that was put on him during his successful run all the way to the grand finals. The Taiwanese player was completely unknown to the public before entering the event on Saturday, but with wins over new Archon member Hosty and popular streamer Reynad, he made his statement loud and clear. The grand finals turned into yet another convincing win for Chakki on his way to the finals, but a second place win made Pinpingho eligible to step into the ring again next week to fight off the invited players and Challenger participants once more.

The format used to fill the bracket wasn’t groundbreaking. The same idea has been used in tournaments and games everywhere: an invite system with a small part of the tournament also hosting an open tournament. However, the real innovation came from the way the players had to chose their decks. The way it’s usually handled in the current Hearthstone tournament climate is the typical ban system. That means players bring a certain amount of decks to a tournament and, prior to their match, ban out one of their opponent’s decks. After that, only the first selection is random and blind as most tournaments utilize the ‘winner stays’ method. The only real problem with this format is counter-picking.

Every professional player knows which deck should be favored over any given opposing deck. That turns most series into a string of counter-picks with massive emphasis on the first match played: the winner of that game gets to counter-pick the last deck of his opponent and has a huge advantage for the entire series.

The Legendary Series, however, tried to mix up that process and introduced a new format. For the first three matches, players had to submit their deck order to an admin. They don’t know how their opponent picked, so the first three matchups of the series are completely random. If the series is not decided after the first three matches, the players can play a deck they choose regardless of whether it won or lost in the first battle. As a result, a lot more variety is added and the opportunity for counter-picking with lopsided matches over and over is limited. The downside is that the inherent randomness is elevated. Players can no longer really strategize and bring a deck to a tournament to specifically counter a certain popular archetype – the focus is more on submitting three overall solid decks, not to go for some special flavor and tech. 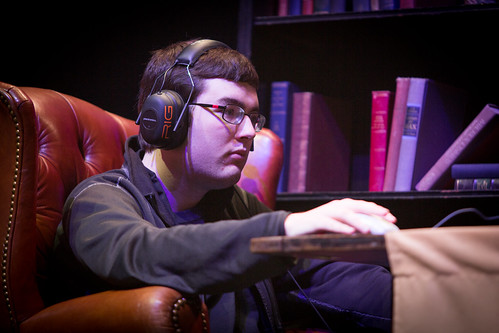 The format wasn’t the only noteworthy thing on Saturday. On the virtual tables, it was Chakki who completely dominated the competition, winning the first Match Day in ESL Legendary Series history. The young American and former NESL King of the Hill is known in the Hearthstone scene for his love for aggressive decks – a preference he exhibited to perfection during the competition.

The player formerly associated with Coast Gaming swept his way to the grand finals on the back of an aggressive Hunter, Zoo and Bloodlust Shaman. The latter especially was an archetype not a whole lot of people would have expected. In a metagame that is about burst paired with the inherent advantage Shaman usually has on a board, Bloodlust was a threat throughout. The lineup brought the pain to all opponents no matter who they were.

Up first was gcttirth, who could barely jeopardize the life total of Chakki during all three matches. The aggressiveness and dedication to completely commit to that game plan also worked out for Chakki against the acclaimed Romanian Hearthstone star Rdu. For most of the games, Rdu was on the backfoot, trying to stop the bleeding and stabilize on board. The relentless onslaught of damage kept on coming and after a while the DreamHack Summer 2014 Champion had to tap out and concede another 3-0 win to Chakki.

Only Taiwanese player and newcomer Pinpingho stood between the American and a flawless march to the first ESL Legendary Series title. Unfortunately for Chakki, his undefeated streak didn’t make it past the first match of the grand finals. His Bloodlust Shaman with Al’Akir was not enough to burst down the Handlock of Pinpingho. A powerful turn eight swung the momentum and the Shaman couldn’t play catchup successfully.

The loss was only a mild disturbance in the dominant performance put on by Chakki. The North American player only lost one match all day, going on a tear following the loss with his Shaman. First he hunted down Pinpingho’s Shaman before going for the soul-crushing Zoo double finish against the Druid and the revived Shaman. Pinpingho could do nothing except watch his health dwindle at the hands of Chakki’s minion army.

With that, Chakki topped of the first ESL Legendary weekend with a 9-1 record, gathering 80 points for the rankings. Pinpingho goes home with a growing reputation and 35 points in the bag, while third place will be determined between Rdu and Reynad for the last remaining 15 points of the opening week. The Legendary Series returns next Saturday with Chakki and Pinpingho back in action to face new challenges. Four more invited players will join the fray as well as two more Challenger heroes. At the moment, the Challenger tournament is has four players left standing, so the week two of the Legendary Series will be graced by either PHONETAP or Frase and Max or CrazyMageeee.

Whoever it turns out to be, make sure to tune into the action this Saturday on Twitch.tv/ESL_Hearthstone to watch the magic unfold!

If you want to be part of the Legendary Series and get involved in a more hands-on way, check out the Challenger Series, which is open to everyone. Two players will qualify each week to go up against the best players Hearthstone has to offer, so sign up and become Legendary!

Image of Rdu from Facebook.com/rduhs.