Stop… Hammerstein! StrifeCro and Hyped through, Tides and Firebat in trouble

New York City is the center of attention in the eSports world over the next two weeks. This week it’s the North American BlizzCon Qualifier Phase 2 at the Hammerstein Ballroom, while next week will see the Theater at Madison Square Garden host the ESL One festivities.

Following an eventful couple of weeks in the world of Hearthstone, anticipation for the star-studded event was high. Many fan favorites like Hyped, TidesofTime, ThatsAdmirable, StrifeCro and Firebat made it into the second phase in an effort to make it to the big Hearthstone World Championships. The atmosphere in the Hammerstein Ballroom was electric from the start – the crowd was into it, the set design was superb and so a couple of games in the cozy onstage inn commenced. 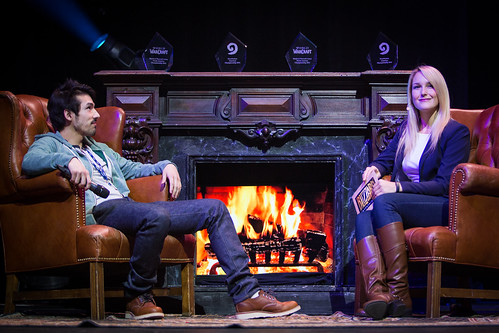 It seems the slow waltz of the European qualifiers’ heavy Priest and Paladin control matchups would have been better suited to the Ballroom setting, with the Americans demonstrating a much more upbeat rock ’n’ roll playstyle. However, despite this the most obvious difference between the regions was their choice of decks. The Europeans shied away from Hunter a bit more, were more eager to put Handlock into play and had a wide array of heavy control decks prepared. As a result, the games were long, with most matches going the best of five distance and Day one of the tournament turning into a 16-hour marathon for everyone involved.

The Americans didn’t put their faith in the light but massive aggression instead. Right from the get-go, it became apparent that most of the NA ladder stars had more trust in aggro. The Druid decks provided a mid-range or fast style of play, featuring two pieces of the combo – something that died out in the recent meta. NA brought it back, paired with a fair amount of Zoolocks, face Hunter, aggressive Rogues and even explosive burst Shamans. Everyone with a crush on aggro and a distaste for long fatigue battles got their money’s worth with this event – even though some control decks performed better than most. 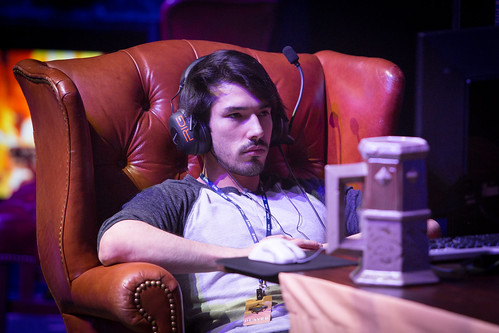 Most notably falling into this category was TempoStorm’s Hyped’s freeze Mage and Deerjason’s control Druid. Both players swept their way into the playoffs stage with only those decks, both going a stunning 6-0 with them. In Hyped’s case, it was somewhat out of left field when he brought a freeze Mage without his beloved Giants. In previous tournaments, he was seen taking a different approach to the stall Mage, using more creatures that synergized with hand size like Twilight Drake and Mountain Giant, fighting hard for board control and disrupting enemy plays with secrets. The one downside seen in tournaments was the lack of big finishers in his deck as soon as the Giants were gone. So, for this massively important tournament the experiment was over, and an old friend in freeze Mage returned – albeit with a twist.

Deerjason, on the other hand, brought back another almost forgotten card – Healing Touch. This card, once a staple in beta, fell from grace around about the time Druids felt the urge to ramp up their mana curve, with it and cards like Mark of the Wild left by the wayside to make room for the dreaded Wild Growth and heavy taunts combo. Deerjason brought it back in as a surprise, which paid off in strides. Against the freeze Mage of TidesofTime it pulled its weight especially, allowing him to walk straight to the playoffs. 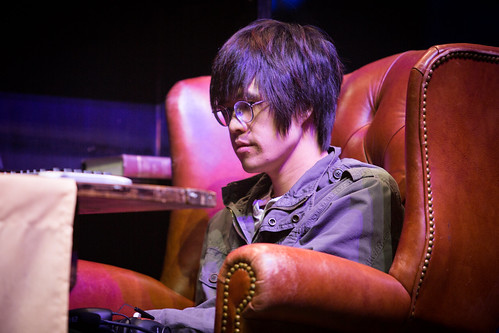 Hyped and Deerjason are not the only ones to have already punched their tickets for the playoffs – Tarei and StrifeCro did the same. The interesting aspect of this group of four is the class that brought them here – Hyped is the only one that drew his success from Jaina’s magical abilities, with all the other three letting nature rise against their opponents.

Even more interesting is the difference in deck choices for Malfurion. Tarei completed his sweep with a faster version of Druid, with minions like Chillwind Yeti and Argent Commander making a comeback and Shade of Naxxramas following after their introduction. With that, Tarei’s strategy was primarily centered on getting strong and sticky minions on the board in order to have all the pieces in play for an explosive finish. Against Group C favorite Chakki, this was the case in almost all three games as he made the reverse sweep happen. Turning the 0-2 deficit into a 3-2 victory to advance to the upper bracket finals was a huge accomplishment for the known ladder star, who then finished off Japanese contender DTwo 3-1. His fast Druid is still undefeated, while all three of his other decks haven’t won a single game yet.

The fast Druid was one thing, Deerjason’s control Druid with Healing Touch another, but last in the family was StrifeCro’s deck. The old class master credited with the innovation of the mid-range Druid in beta sided once more with Malfurion – a relationship that rarely disappoints. StrifeCro brought a ramp Druid into play, one of the most late-game-orientated Druid builds. With its ability to accelerate the mana curve, it gets to the late-game earlier, making it tougher and more expensive for opponents to deal with big threats.

StrifeCro is the only one of the four advancing to the playoffs without a 6-0 deck to show for it, but his 4-2 ramp Druid laid the foundations for both 3-1 wins. In his clash with DeathStarV3, he finished it off the series with his Handlock, using his Hunter against Firebat. That makes both those builds undefeated so far, but the shiny day one 6-0 goes to Tarei, Hyped and Deerjason. 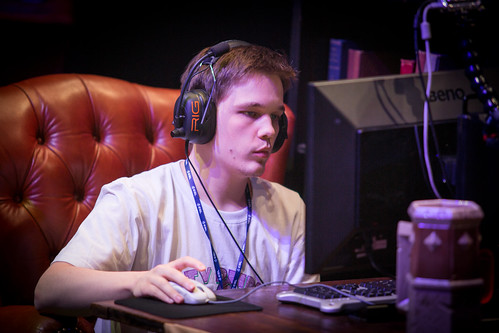 Four people are already in the playoffs and four have been eliminated. The remaining eight will have one more chance to showcase their skills – one last chance to stay in the tournament. For fan favorites and established players like TidesofTime, Firebat and Chakki, the pressure is on with newcomers looking to make a name for themselves at their expense.

In Tides’s case, it will be JAB trying to land the knockout punch against the former Dota 2 professional. After Tides’s enormous success in Phase 1 and the tournament scene overall, him not making it to the BlizzCon World Championships would be a sad state of affairs. On the other hand, JAB has demonstrated his resilience in the tournament already, having had the morale to fight his way to the lower bracket finals after a 0-3 beatdown at the hands of Deerjason.

He showed solid composure regardless, rallying back and delivering despite the high-pressure situation of being on the main stage. kuhaku was to be the victim of his fast decks. Every other player brought some sort of control deck to the table to actually be able to engage in long battles, but JAB didn’t – all of his brought the fight directly to his opponent. Zoolock (the fast Druid version), Deathrattle tempo Priest – sometimes referred to as the BMK Priest – and an aggressive Hunter are JAB’s soldiers, all with the aim of quickly overwhelming the opposition. So far the results have been mixed, and he posted the worst record of all eight remaining players as a result. In the end, however, this doesn’t matter at all – it’s all about the one series, that one match against TidesofTime. 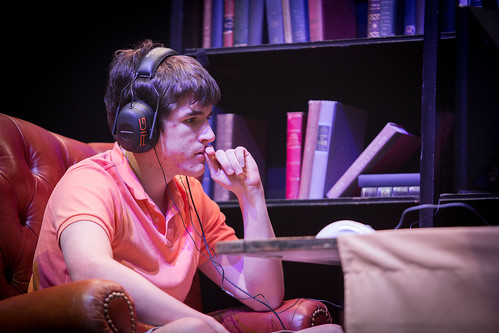 For Firebat and Chakki, their tournament is also on the line, although the pressure is not as high as it is for Tides. Obviously both players are known in the scene and have Hearthstone accolades to their names, but neither have recently won the big WEC LAN. Firebat, however, will have his hands full with DeathStarV3, one of the region’s up-and-coming players. In Phase 2, which Firebat didn’t play, DeathStarV3 upset some great players, including compLexity’s own Dog, purpledrank and StrifeCro. The rematch with Strife didn’t go his way, but a win over Team Coast’s Twisted still has him in a position to advance.

Even more well known than DeathStarV3 is Chakki’s potential last opponent. Don’t Kick My Robot’s DTwo is not only Japan’s biggest star but also a rising one in North America. He already proved his talent in showmatches, and now he can do it on the big stage. So far it has been the Druid that carried him to this point, while Chakki’s interesting and aggressive take on Shaman stood out for the American. With two Doomhammers and a Lava Burst, potentially two, this version of Thrall is as explosive as can be. The overwhelming fear of lethal coming out of nowhere has to be on DTwo’s mind at all times, especially with most of his decks aiming for big taunts later on. The burst Shaman could easily bypass those and showcase magnificent reach with spells.

Last among the final set of elimination matches is Ant against StUnNeR. Both players were two of the most unknown on the field, with Ant rotating into the tournament due to the two Filipino players’ visa issues and StUnNeR only qualifying for Phase 1 by winning the last call qualifier. So, while the road thus far hasn’t been without bumps for these two, they are still in a perfect position to go all the way to BlizzCon. Both players won against Admirable, and both players got frozen solid by Hyped – now who will win the tiebreaker? Can the Australian make the top eight or will the American Ant avoid elimination?

To find out which American heroes will represent the red, white and blue in Anaheim, make sure to tune into Twitch.tv/PlayHearthstone at 09:00 EDT (15:00 CEST), when the last batch of group stage matches will take place.

Make sure to use the #RoadToBlizzCon when tweeting about the event to stay part of the action, and follow us here and on Twitter for more Hammerstein coverage!