Last week in the ESL Legendary Series we all got a sneak peek into the world we were about to enter, with Goblins and Gnomes only seconds away from release. Some beasts like Gahz’rilla or Lost Tallstrider were already able to be summoned by Webspinner in the Hunter matchups, resulting in some interesting facial expressions on the player webcams. However, now the entire parade of explosions and other crazy inventions by these two key creative forces of the Warcraft universe have been rolled out, causing mayhem everywhere.

Navigating his way through these new situations and explosive board situations best was Taiwanese player Weifu, who not only edged out compLexity’s dog in the grand finals but also won despite the timezone difference, having to stay up way past the dawn of a new day in Asia in order to be awake for his crowning moment.

While the top players in the Legendary Series change every week, one theme has been true for three out of the four so far. The Challenger players, who had to fight their way through an entire single elimination bracket on Sunday and beat out more than 300 people, continue to be successful on Saturdays as well. Only in the debut season did one of the invited players make it all the way to the top. Back then, it was Chakki with his aggressive playstyle who quickly eliminated every opponent. Since then, the winner of the Legendary tournament was always a player who went through the Challenger tournament first. Max, SilentStorm and now Weifu – the momentum picked up during the long playing time seems to come in handy for the stiff competition of some of the best and most accomplished players waiting on Saturday. 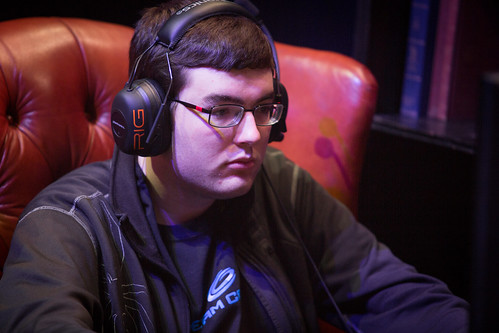 This isn’t the only trend that continued, however. As well as the Challengers are doing in their debut on the big stage, they also drop straight off just as regularly. Following their triumphs, neither Max nor SilentStorm could muster up much resilience the following week, causing them to exit the tournament straight after the first round. This theme has held true for every winner, regardless of whether they fought their way into the tournament or got an invite. Chakki himself, after going 9-1 in his win, couldn’t get anything going in the new week, resulting in him being eliminated in the first round against Dtwo.

Now Weifu will have the chance to overcome this curse. With him reentering the fray in week five, he will not only challenge these streaks and hope to snap both of them, but he will also take a shot at directly making his way to Burbank, California. As the incentive to win before was points and a reinvite, this now shifts and makes victory even more important. After week four, every single winner can automatically book their ticket to California and start mentally preparing for the big ESL Legendary Series grand finals – who’s it going to be?

As mentioned previously, this was not only Weifu’s crowning moment but also the first appearance of GvG cards in the ESL Legendary Series circuit. This didn’t shake up the meta in every aspect, but it still brought a number of nice new ways of approaching the game in certain situations. Typical decks like Hunter or Zoo Warlock still made their presence felt in the competition regardless, but with new cards and new ways for individual classes to be good, the reappearance of the almost forgotten Paladin class in competitive play happened in front of our very eyes.

The class didn’t quite make it to the grand finals yet, but players like Backspace, Neirea and Powder put their faith in the light and decided to play it regardless. With the improved early and mid game, the class that used to be the greediest and slowest became much better, with Silver Hand Recruits now able to swarm the board and get buffed up to 3/3s thanks to Quartermaster’s shiny new weapons. Just seeing the class and Uther Lightbringer back in action was a nice touch, although it didn’t quite help those players to tremendous success. Neirea and Powder had to leave the competition straight after the first round, while Backspace stayed until the semifinals.

As such, it was mostly the known decks and popular classes that took center stage in the grand finals. In true dog fashion, he brought his newest version of the Druid class, while also banking on control matchups throughout with a control Warrior and a Priest. The shining star of his lineup was without a doubt the Warrior, who put him into the grand finals. In the semis against Fr0zen, it was that Warrior who provided the reverse all-kill, giving dog the opportunity to showcase himself in his first grand finals appearance in Hearthstone.

That this grand final debut was a losing effort can mostly be attributed to the quick start Weifu got in the grand finals. His Hunter got off to a perfect start with a perfect curve against dog’s Priest in game one, getting Undertaker into Mad Scientist followed by an unanswered Huffer into Houndmaster. dog had to somehow stabilize and decided that his best line of play was to dig in his deck for the Auchenai Soulpriest – but to no avail. On turn seven it was all over, and Weifu had drawn first blood in the grand finals.

After that, it was his Handlock against dog’s Ramp Druid, a matchup that looked decent for dog in the early stage. A board swing with Big Game Hunter put the Druid on the board big time, but wasn’t enough to quite punch through. Weifu could stabilize, put up big taunts and deal with every threat the compLexity player threw his way. That made it 2-0, with the Taiwanese player only one more win away from the Legendary title, 80 points and the opportunity to finally get some sleep.

He couldn’t make it 3-0, as dog fought back with his Warrior twice. Weifu’s Priest had no chance to even remotely punch through the stacks of armor build up by Garrosh, while the Handlock took two tries to take it it down. In the end, it was a Ragnaros flip that went horribly wrong that gave Weifu the opportunity to swing the entire tempo and board of the game, from which the Brawl-less Warrior never recovered.

With the final score 3-2, both players showed incredible poise and skill, with Weifu the triumphant winner and comeback kid dog only one short of turning two back-to-back 0-2 deficits into 3-2 success stories. For more Hearthstone action and everything you need to know about the Legendary Series each week, make sure to check out the official homepage. Additionally, if you want to help continue the streak of Challenger players being crowned the winner, sign up for the weekly Challenger Cups here!