The ESL Hearthstone Legendary Series is picking up speed, with more and more established players throwing their hat into the ring to try and clinch a spot to the big offline events in California next year. In the midst of this competition comes the the Goblins and Gnomes expansion, which is set to go live before the fourth week – returning players SilentStorm and Brian Kibler will have to adapt to the new cards and situations in order to stay on top and earn more valuable points.

This week we’ve already been given a sneak peak into the world we are about to enter, with the popular Hunter card Webspinner summoning some of the new beasts about to be let loose. With the King of Beasts, Lost Tallstrider and Gahz’rilla having already been scouted in the battlegrounds, next week the entire zoo will open up.

The main storyline of the competition wasn’t the new cards or the possibility of steep meta changes on the horizon, but more the storm that was set to conquer the Hearthstone competition. North American competitor SilentStorm, representing Team Magicamy, started out as a relatively unknown quantity despite his great run a few weeks ago in the Prismata Cup #2. The community still hadn’t really picked up on the idea of SilentStorm as a big-time contender, a perception he might have changed on Saturday. Throughout the competition, the Canadian didn’t just show the mental fortitude required to compete at the highest level, but he also appealed to the crowd by playing at a faster pace, meaning the rope didn’t get into his turns so much.

Now the youngster has second place in Prismata and the title in the ESL Legendary Series week three on his resume, with an encore performance scheduled for week four. Who his opponents are going to be then is still unconfirmed, with the qualifiers not fully unfolded and the invites still sealed. However, what is certain is that M:tG Hall of Famer Brian Kibler will have a go at it once more, trying to avenge his grand finals loss on Saturday.

The veteran of Magic: The Gathering played a magnificent tournament up until the grand finals, eliminating Chinese Challenger player XiaoGz and Polish star Lothar from the contest. Utilizing a great mix between aggressive decks and a control class guided him all the way to the finals, bringing a Druid, a Hunter and his beloved Priest class to the virtual table of the ESL inn. All three decks scored against XiaoGz, while the Priest and Hunter carried him to victory over Lothar. Poised to finally break out of his shell and score that first big tournament victory, Kibler’s path led him straight to the finals – but unfortunately straight into the eye of the storm. 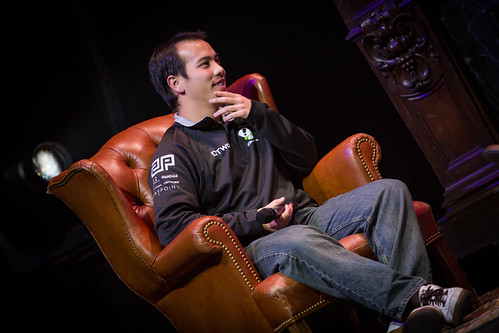 From marathon to sprint

For SIlentStorm, the way to the grand final was slightly longer and more intense. The Challenger player had to overcome popular German Hearthstone name ek0p first. After the 3-1 victory against the Cloud 9 player, another massive challenge in form of DTwo was ahead. The American living in Japan from Team IHEARTHU just recently gone from relative obscurity to the top of the NA scene with his performance at the BlizzCon World Championships. That appearance along with stellar performances in other tournaments netted him an invite to the ESL Legendary Series last week, in which he validated that opportunity with a run to the grand finals – ultimately stopped by British player Max.

Determined to go for another grand final, he started his week three campaign with a decisive victory over popular Hearthstone figure apDrop before slugging it out with SilentStorm.

That match went above and beyond all time constraints. Not only were the players so evenly matches that it took them five games to figure out a winner, but the fourth and fifth game also featured the infamous Priest mirror match. Just as expected, both of those mirrors went all the way down to fatigue, with DTwo winning the fourth but running out of breath in the fifth. The better stamina was with SilentStorm that night, who opted for very aggressive play in the first mirror matchup, trying to mill DTwo with limited success. The resources invested into the play by SiIlentStorm were too much, and the IHU player was able to put enough pressure on the board to close out the match and push it into the fifth and final game.

That unfolded just as the previous match, only without the mill element. SilentStorm played a bit more defensively, traded slightly more efficiently and in the end had a Injured Blademaster with DTwo completely out of cards and firepower.

With the length of a full best of five and two Priest mirrors, SilentStorm felt like sprinting to the finish line and take out Brian Kibler in a hurry. A clean and clear 3-0 sweep was shown on the scoreboard, with Kibler having a rough time. Whatever BMK threw at his opponent, SilentStorm either had the answer or was fortunate enough to get it in time. That happened in the first match when a timely Gorehowl stopped the fast Druid on the spot, it also happening in the Hunter versus Shaman bout when a Hex instantly came out to greet Savannah Highmane. With that, the Canadian was able to drain the resources of Kibler’s two more aggressive decks of and take over the games bit by bit.

The third and final match was a different story, as it looked to be heavily in Kibler’s favor from the beginning. A Priest mirror match with one side getting two Injured Blademasters and a Circle of Healing on an empty board at turn four is usually a pretty lopsided affair, but the starts were just not aligning right for Kibler today.

SilentStorm was able to draw out the match just long enough for a huge turnaround play with Sylvanas Windrunner and a Wild Pyromancer, shifting the entire game. From that point on, neither really had the power to kill their opponent, but Kibler was playing catchup. SilentStorm was once more able to use his resources to the fullest, granting him a 3-0 lead, 80 points for the standings and the ESL Legendary Series week three crown. For more Hearthstone action and everything you need to know about the Legendary Series each week, make sure to check out the official homepage. If you think you have what it takes to compete with the pros and follow in SilentStorm’s footsteps, sign up for the weekly Challenger Cups here!