Round of eight matches finalized as Group D wraps

With this year’s two former WCS winners facing off first in a mirror matchup and teammates taking on the second set, Group D gave us an incredible show yesterday – and left us foaming at the mouth for some thrilling round of eight play.

BlizzCon is right around the corner, but the first two faces of Group D, StarDust and MC, had nothing to worry about regarding their placement among the top 16 players in the world. 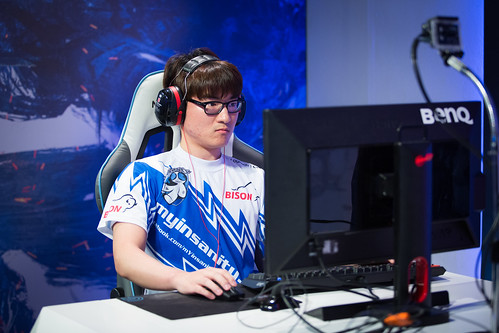 They casually kicked off the evening with King Sejong Station, where MC’s phoenix harassment and colossus attack were not enough to best StarDust’s brilliant use of blink stalkers and adept archon timing. StarDust opted to take a hidden base in the mid game on Merry Go Round, which didn’t propel him to a win but instead led to a veritable stalemate – until the mYinsanity player mistakenly marched up his opponent’s ramp and lost his archon army to MC’s tempests.

Finally, on Overgrowth, StarDust seemingly threw away his army – but very intentionally killed MC’s last observer in the process. StarDust then brought in three DTs during the base trade, and the season two champ took the third map and the series.

Taking none for the team 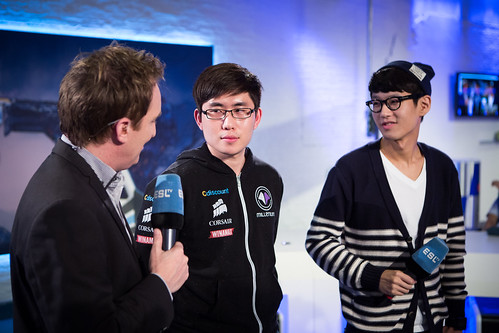 StarDust’s win moved us smoothly into a set featuring a clear underdog and some healthy team and race rivalry. Terran Millenium players Dayshi and ForGG took to Catallena with the audience’s memory of two-time semifinalist ForGG’s taunting tweet still lingering: ForGG’s record versus Dayshi was a cool 18-0.

Dayshi left his base on map one and found his mineral line completely invaded by ForGG’s classic hellions, who were quickly followed by aggressive Viking play and non-stop attacks to make the ForGG versus. Dayshi record 19-0. On Nimbus, Dayshi began with the same build as he did on map one, but ForGG brought out hellions, marines and cloaked banshees, and Dayshi could not hold.

ForGG took home the series and Dayshi’s tears in a vial.

Boss in French is still Boss 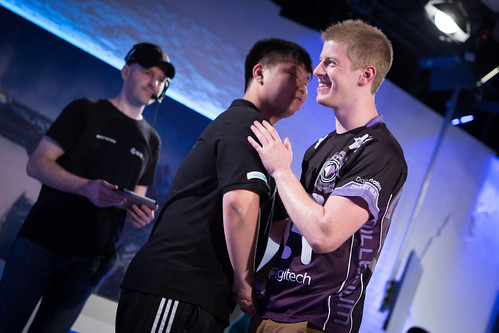 A quick hug and a smile from each player began the lower bracket match, where the Terran and Protoss players spawned first on Deadwing. “Daychaud” chose an older, unexpected build with multiple barracks – one of which he used as a scout.  After MC traded his army for 26 of Dayshi’s SCVs in the mid game and Dayshi made drop after drop with better upgrades, MC’s reinforcements were non-existent.  The Millenium player took the first map. MC fought back on map two, Merry Go Round, to even out the series.

With one game to each player, MC and Dayshi took on game three and King Sejong Station. Dayshi stormed MC’s main, macroing in the back for EMPs, before meeting the Boss Toss at his own front door for a difficult SCV versus archon engagement. Blink stalkers and storms sealed Dayshi’s unfortunate fate as his army composition just couldn’t hold up. Said MC: “I know how to win.”

Given that ForGG is only 54% against Protoss, he had a right to be nervous facing last season’s champion in the upper bracket.

Rather than sticking to his normal, highly aggressive play, he took a defensive position at several points during the game. However, a good start for the Terran wasn’t enough to stop StarDust’s storms and high templars from earning him a win on map one.

On Merry Go Round, ForGG made up for a missed scout with incredible micro up and down StarDust’s ramp. Wiping out the colossus first and taking out the rest of the army, ForGG tied up the series and sent both players on to Catallena. Marine harassment of StarDust’s natural and unrelenting aggression propelled ForGG into the round of eight in a surprising – but not fully unexpected – group victory.

Game one between MC and StarDust fell under what we know as the “curse of the second series”. MC used the tactic that his opponent had used on Overgrowth earlier in the day: killing the observer at any cost, and then moving in knowing he was facing a blind Protoss. 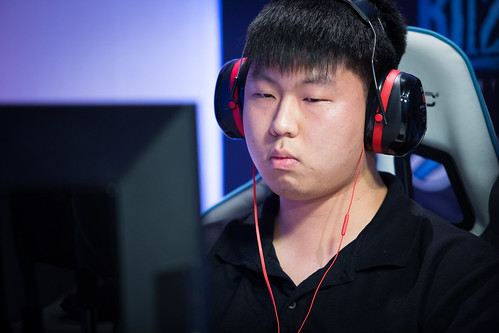 In the lead on his way into map two, King Sejong, MC phoenix harassed to kick things off. When it appeared he and StarDust were nearly even in army supply around the mid game, the Boss Toss moved in for the kill, sending StarDust’s army supply plummeting as units hit the third base. With plenty of zealot reinforcements to follow up, MC ended the game.

Saving the best for last 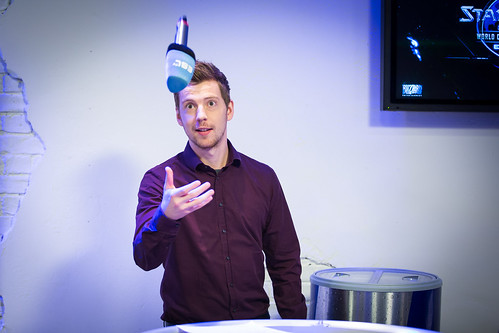 Amazing mirror matchups weren’t the only highlight of the day. Round of eight matches were drawn after the competition ended. Just as expected, we’re in for some interesting games, like the last-picked ForGG versus MMA – two players known for incredible TvT. Check out the bracket here.

If you missed any of the action, we’ve got the VODs right here as well as our Group C recap here. Be sure to tune in on the 4th of October as the quarterfinals begin!

Don’t forget to sign up for ESL Fantasy WCS!