“Now I’m able to do what I love for a living”: Machine talks to us about joining ESL

Alex “Machine” Richardson recently became the newest member of the ESL TV crew, and will now be commentating the likes of ESL One Battlefield 4, League of Legends and more for us in an official capacity. We sat down with Alex to talk about this fresh opportunity, the challenges ahead and his future goals coming into this new position.

ESL: Hi, Alex – thanks for your time. People who don’t regularly follow the Battlefield scene might not know you – would you mind giving them an idea of who the new face in the ESL TV caster lineup is?
Alex: I’m relatively new to the Battlefield scene myself. I’m a lover of all things gaming and have a particular fondness for fast-paced games, be it FPSs or MOBAs. Battlefield filled the void that COD 4 Promod left, and I began casting the world’s best Battlefield players online and onstage. There’s always something happening in multiplayer Battlefield, whether playing casually with 64 people with explosions are going off left, right and center or even when condensed into a competitive 5v5 scenario – there’s always something exciting happening, which suits me!

ESL: Before you joined ESL, you worked with us at gamescom earlier this year. What was your experience commentating the ESL One Cologne Battlefield 4 finals?
Alex: It was a great experience, really different to any previous offline events I’ve covered, for example some of the earliest offline events I ever covered where I was in a narrow corridor room at a racecourse alongside Lauren “Pansy” Scott and Leigh “Deman” Smith talking about Call of Duty 4. The stage was awesome, the crowd always overflowing and seeing some of the passion that the individual players brought to the stage made casting their highs and lows even more enjoyable.

ESL: How has living in Germany been so far? What do you expect from your time here?
Alex: I’ve only been here for a very short period of time, but I already have a growing love for Cologne as a city. Everyone seems friendly, and German public transport makes me a happy bunny – everything arrives when it says it will and you don’t have to worry about accidental eye contact with a stranger being considered a call to arms. I really hope to explore the intricacies of the city I now live in and learn my way round a bit more.

ESL: As well as Battlefield 4, you will also be commentating a few other games at ESL. Which other games are you extending your casting expertise to?
Alex: I am also going to be covering League of Legends, which I currently spend far too much of my free time playing so I’m really excited to expand into casting that! I always have a place in my heart for the Call of Duty series, and I’m very fortunate to be able to pick up and learn games quickly, which gives me a flexibility to cover exciting releases like Evolve – and more – as well!

ESL: Which kind of games do you play or enjoy the most in your free time? Is there anything special you would like to share with a broader audience?
Alex: As I said before, I’m a bit of a LoL nut – all the time I used to spend practicing grenades like a loser and working out new ways to not be bad at Call of Duty I now spend messing around in normals with friends or dabbling in ranked if I ever have the desire to get furious at pixels. 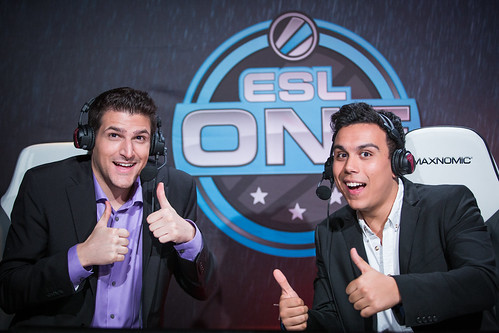 Jason and Alex already formed a duo at gamescom

ESL: You’ve already worked together with Lauren “Pansy” Scott quite a lot. Was she involved in your recruitment, and if so how?
Alex: I’ve known Lauren since she was playing competitive CoD 4 way back when, and we became good friends as we casted everything from online cups to iSeries finals together. We grew and improved together, and when she was recruited by the ESL it put everything into perspective and gave me something to aim for. Working with ESL UK while I was at university combined with Lauren and other industry professionals’ recommendations opened the door to ESL HQ, and now I’m able to do what I love for a living – I can’t ask for more than that.

ESL: The casters’ office was already in British hands before you joined. How have you found your first days there?
Alex: The casting office is a really fun environment – I’ve never experienced a standard office before and I don’t plan to anytime soon. Everyone has a passion for their chosen game/s and is super chill. The next step is setting up my desk to compete with everyone else’s – I’m missing some key pieces of gaming paraphernalia to compete with the others, but I’m sure that will come with time!

ESL: The newest season of ESL One Battlefield 4 kicked off this week – when will we next be able to see you commentate?
Alex: Next week! Myself and Jason will be in the studio to bring everyone at home some Battlefield action.

ESL: What are you most looking forward to now that you’re working with ESL?
Alex: Tough question! Probably the new experiences and also improving as a caster. I mean, I had someone put makeup on me for the ESL One Summer Battlefield 4 work, so that was a new experience, I guess! But in all seriousness: traveling, learning new games and meeting new people. Secondly, the ‘improving as a caster’ part also excites me – being able to spend my working week striving to get better will be so much fun. Previously I’ve casted, say, couple of hours on a weekend, but suddenly changing that to five to seven days a week – it’s going to be sick!

ESL: Looking forward to your time with the crew: what do you expect the next month and maybe even years to bring?
Alex: I couldn’t tell you! I’ve come to Cologne with an open mind. I’m just excited to get into the swing of things.

ESL: Thank you for your time and we hope you have a good start here in Cologne. The last words are yours!
Alex: Big love to ESL for giving me the chance to do what I love and hopefully do well. Look forward to seeing those reading in Twitch chat! xo

Make you don’t miss Alex’s first show, which will be the second ESL One Battlefield 4 cup on Tuesday the 30th of September. If you have any additional questions for him, make sure to post them in the comments below!