With 1500 WCS points and $68,000 waiting for the winner, KT Rolster Zest and Jin Air Green Wings Trap took the main stage on Sunday to battle it out for the Intel Extreme Masters Katowice World Championship!

KT Rolster Zest’s path to the finals was marked by a bit of a struggle, plus huge PvT wins that shocked the crowd and casters. In an uncharacteristic fashion, Zest’s quarterfinals opponent INnoVation sacrificed map five, leaving the Protoss player in position to oust another Terran in the semifinals when he faced Bbyong (who had incidentally beat his Protoss teammate and tournament favorite herO, just hours earlier).

Trap’s path was not exceptionally different, except in one way: his wins were more clear cut and he appeared to be playing from ahead, whereas Zest was taking comebacks. Trap had to plow through legendary Terran players Flash and Fantasy, but his most unexpected domination came with a 3-1 defeat of crowd favorite and the sole remaining Zerg, Dark.

As both players prepared to take the stage Sunday, Trap wanted his opponent to know that he was coming to get the KT Rolster player, whose own message was: “Zest is best.”

But let’s start at the true beginning: Overgrowth.

It seemed map one play reflected the players’ paths to the finals. The play from Trap was intelligent and he appeared to be ahead the entire game. But Zest turned it around at a clutch moment and took Overgrowth to give himself a 1-0 lead.

The early game saw both players hesitant, neither making extreme moves and each mirroring the other’s play – without scouts. But an early mothership core loss for Zest indicated Trap would take the map. Trap stayed slightly ahead with a hallucinated phoenix scout and the completion of his third base, each before Zest made the same moves. 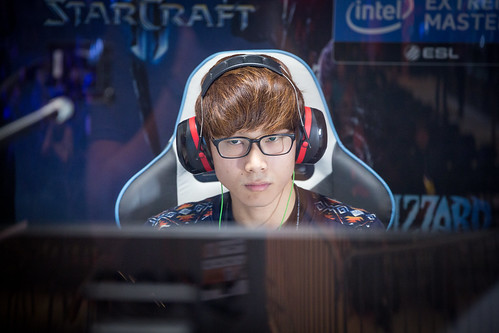 Zest then went for tempest play and moved into Trap’s natural, but Trap held with a flank of dark templar – who were capitalizing on Zest’s lacking observer- to send Zest home. As he pursued, Trap overextended slightly. Zest followed with a punishment and retreated again before making his final move. He headed back across the map into Trap’s third, where his colossi micro and air advantage became too much for his opponent to withstand. After 22 probe kills, the KT Rolster player took the map.

Catallena told a similar story. Zest had a small air advantage and was able to scout his opponent’s stargate tech. After both players went for robotics facilities, Trap moved into Zest’s third, taking his nexus, while Zest began a counterattack. Trap recalled a small portion of his army to the natural, but left the better part in the middle of the map.

Trap made it back to defend with zealots just in time, but Zest continued to invest all of his income in his army, which he kept close to home. Trap marched right into the result of that investment, sacrificing the game.

Heading into map three, it was clear that Trap needed to make firm decisions to get the win. He began the game with a simple two gate, while Zest opted to throw an early stargate for void rays. Trap pushed with stalkers and Zest pushed back, even as Trap transitioned to phoenix. Zest was able to take down his opponent’s attempted natural with void rays and stalkers, and Trap immediately followed up with phoenix harassment on the other side of the map, dealing a lot of economic damage.

With all of Trap’s money in his air tech, and the two players trading attacks, Trap had to make a choice. He saw a lack of detection and moved toward dark templar with a huge economic advantage. But Zest got an observer out just in time and squelched the play, then added five gates. Trap headed toward Zest for an attack, but instead backed off and waited for his army to amass before choosing the critical moment to strike. Feeling the confidence that comes with a huge army supply lead, Trap marched across the map and knocked out Zest’s third, catching his opponent completely off guard. A massive amount of archon damage ended the game and cut Zest’s lead down to 1. 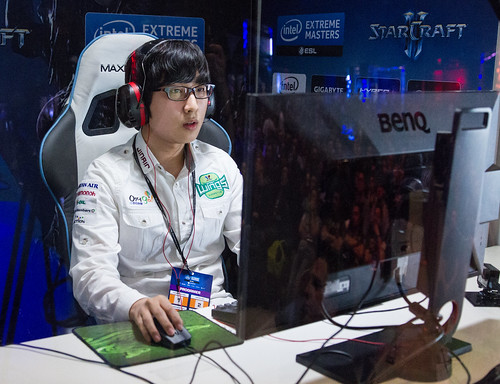 Heading into map four, Trap knew he had to make something happen. He threw a stargate while Zest went two-gate, but an early mothership core scout by Zest showed him one of two oracles and the plan. Zest went for stalkers, expanding behind it and picking off one oracle. Trap opted to use revelation on Zest’s army, but it didn’t help his cause, as Zest’s economy and unwillingness to fall for Trap’s stalker bait kept him on top.

Further into the mid game, both players went for robotics. Then Zest decided to take a risk, pushing for Tempests in hopes of countering Trap’s presumed colossi. But both players had chosen to make the same assessment, and a huge engagement ensued, where Zest’s air dominated over Trap’s mix of gateway units and tempests. Zest moved across the map and Trap countered with a DT attack on Zest’s third, leading into a Zest attack on Trap’s fourth, where Zest came out the victor. Ultimately, Zest saw weakness in Trap’s third and moved in, using his overpowering tempest army to take the game in a beautiful, nail-biting engagement.

The game began with both players, again, building very similarly. They split off when Zest chose twilight council and Trap expanded. Zest’s excellent scout pushed him to get blink. While he waited for blink to finish, Zest moved in and dealt a ton of uncontested damage to Trap’s second nexus while Trap was supply blocked. As soon as blink finished, the KT Rolster player went after the single immortal and mothership core, taking the nexus and ending the series in a matter of minutes.

Missed any of our IEM coverage? You can catch up on our quarterfinal and semifinal reviews, and check out all the VODs right here.