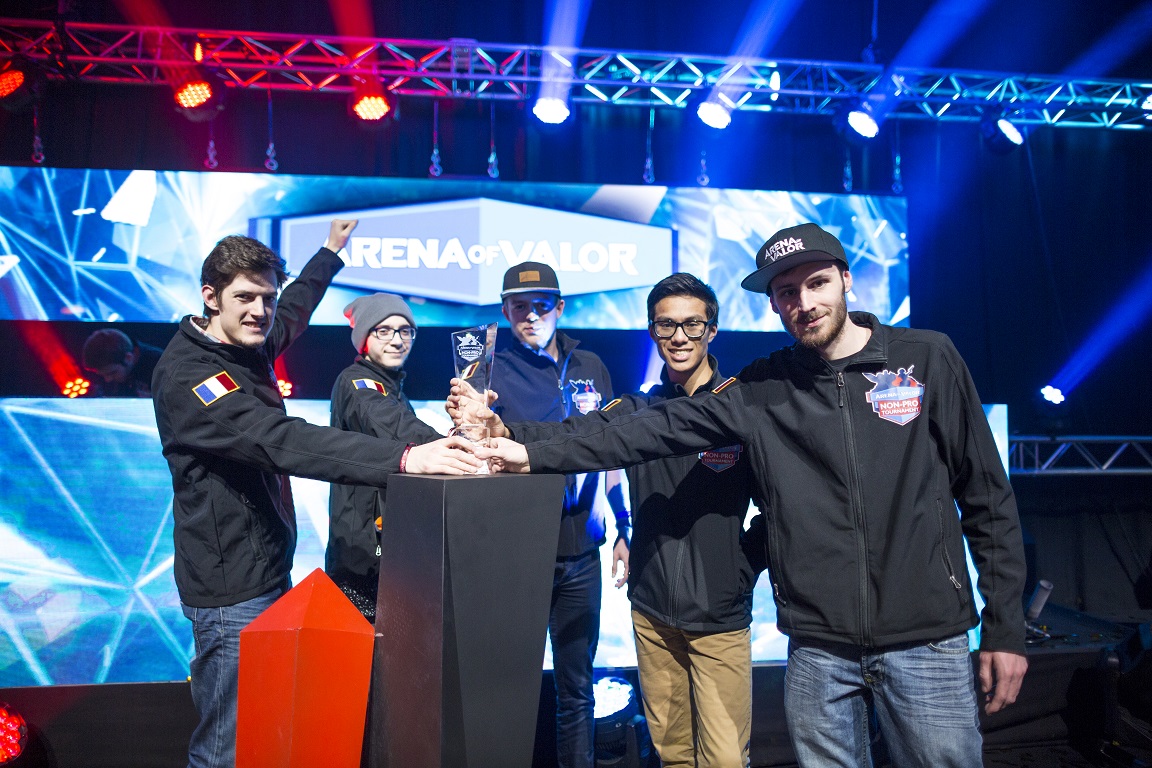 After 6 weeks of intense matches, we finally know who the Arena of Valor Non-Pro Tournament champions are – none other than Team France! There was no stopping the Frenchman at DreamHack last Sunday as they rampaged to the AoV NPT title is spectacular fashion.

Did you miss out on any of the action? We’ve got you covered!

Spain 2:3 Germany
After the seeing Germany in action during the regular season, the Germans earned the title of tournament favorites due to their undefeated status after five weeks of play. Unsurprisingly, the panel also expected a clear-cut Germany victory over Spain. But instead, the seemingly one-sided match-up turned out to be the closest, most hard-fought series of the final day.

For four of the five games, Spain were actually firmly in the driver’s seat by outplaying Germany in remarkable fashion. Unfortunately, the Spaniards had a particularly hard time closing out their matches, due to Germany laying down immaculate base defenses. And while Spain were pondering how to end the games, Germany managed to sneak their entire team into their opponent’s base to backdoor themselves to victory – twice!

The underdogs in control most of the series, two backdoor victories, two 30 minute games – this series had it all!

WHAT A PLAY!!!
Germany manage to claw out a victory with an insane backdoor to stop the Spanish comeback!
Incredible!#AoVNPT #AoV #ArenaofValor #BYOP pic.twitter.com/CfdjI4zd7S

GERMANY DID IT AGAIN!!!
Unbelievable!
They managed to backdoor Spain for the second time today and will advance to the grand finals!
Unreal performance!#AoVNPT #AoV #ArenaofValor #BYOPhttps://t.co/mvDjfP3mPj pic.twitter.com/uBWS5U0UHD

France 3:0 Italy
What was expected from the first series of the day, happened in the second series instead. Quick games and utter domination. France came out to play and left Italy next to no chances all series. In eleven, eleven and nine minutes respectively, the Italian’s title hope got shattered as France plowed through the second semifinal with revenge against Germany on their mind.

They lost to the Germans during the regular season and would now have the chance to return the favor in the grand finals.

France 3:0 Germany
The grand final most experts and viewers expected – but a shocking result. Before DreamHack, Germany looked simply unstoppable. But in the grand finals, they did not seem to stand a chance against an invigorated French side. It turned out the semifinals were already foreshadowing the eventual result with Germany struggling to the a victory over Spain in five hard-fought matches while France seemed untouchable against Italy.

History repeated itself in the grand finals as France kept their foot on the gas pedal, giving Germany hardly any chances to hit back. In three quick matches the Frenchman dismantled their neighbors to secure themselves first place, $50,000 and the AoV NPT trophy!

$50,000 for the 1st place finish, as well as a trophy to keep – pretty successful day for Team France wouldn’t you say?#AoVNPT #AoV #ArenaofValor #BYOP pic.twitter.com/HcD4GmjPQo