Did groups C and D go according to plan at ESL One Cologne?

The second half of the first day at gamescom saw yet more big teams clash in the ESL One CS:GO tournament. With a US$250,000 prize fund contributed by the community, teams such as Katowice champion Virtus.pro, DreamHack champion Fnatic and newcomers such as dAT team were there to give you your afternoon dose of CS:GO action! But how did they do?

Group C: Did the new maps shake up the results?

To kick off the action, Virtus.pro and dAT team gave overpass its first appearance at a major tournament. Randomly selected from the leftover maps, dAT cheered as they seemed to have prepared for this scenario. After a good start for VP, who picked up the pistol and follow-up, dAT managed to take down the Polish five rounds in a row. However, Snax, byali and their mates were able to even the score to 5-5, starting to pick up some more rounds. In the end, the score at halftime was 9-6 for Virtus.pro, with dAT team having given them a good challenge so far. Pistol and two more rounds in a row fell into the hands of the Katowice champion before B1ad3 brought his team back into the game and the score to 12-7. VP did not let themselves get pushed back, however, and fought hard to win the map as fast as possible with a score of 16-7 sending dAT into the first decider match. 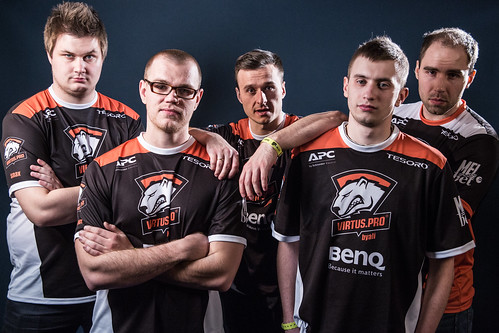 The second match saw the random map strike again, with cobblestone also having had its premier at ESL One Cologne. Fnatic got their hands on the CT half to start with, picking up the first two rounds before iBUYPOWER managed to take their first round of the tournament. This one round changed things a bit as iBP were able to take the following rounds as well as Fnatic struggled to find the right response to their offensive strikes. The score went to 5-2 for the Americans before Fnatic came back to take another three rounds to even the scoreline. Fnatic took over the lead from that point, making the halftime score go 9-6 in their favor. With the first three rounds going to Fnatic now playing as T, they found the motion to carry the game home. Just one more round went to iBP while steel and his mates managed to win the seven needed rounds, ending the game 16-7.

The decider match once again brought up cobblestone, which iBUYPOWER lost to Fnatic previously. dAT team came into the game with the disadvantage of iBP having played the map already, with the Americans taking the first two rounds before Flamie took down iBP’s last men to score their first round. After this, iBP got into their game, and were able to keep the number of rounds that went to dAT down. Only two more rounds were won by dAT team, making the halftime end 12-3 to the US boys, while iBP looked like they were finally starting to overcome the weaknesses shown at other European tournaments. Starting the second half in style, dAT team got three rounds to their account, but iBP once again showed their strength, taking the following rounds to set the final scoreline at 16-6.

With 13 won rounds, dAT team has to say goodbye to the tournament. Their phenomenal ascent has been cut short by American powerhouse iBP, who now have another chance to finally gain a spot in a major playoff phase. However, for dAT team, the story is over (for now).

Back to a pretty common map, dust2 was the place where Team Dignitas and Vox Eminor were fated to clash. The Australians, who dropped out at Katowice as fourth in their group, had a good start, kicking the game off as the Terrorist side and picking up the first three round before the Danes started getting into the game. An interesting back and forth begin, bringing the score to 6-6 with both teams having some massive moments. From here onwards, aizy and device pushed their team into the lead, resulting in a still very open halftime scoreline of 9-6. After switching sides, Dignitas continued their streak, bringing the score up to 14-6 before SPUNJ could take home another round for VoxE, beginning a three round streak for them. However, Dignitas came back to bring the score up to 16-9, ending the game and sending VoxE down to the decider match.

Cloud 9 and Titan played their match on dust2 as well. After losing the first round to the Americans, NBK and his mates managed to win the pistol round and turn things around, giving them a very good start as Terrorists. Giving the audience the game everyone had been waiting for at Katowice, Titan underlined their ambition while getting a good streak going. At 5-1, Cloud 9 managed to hinder the Frenchmen from planting the bomb in time, scoring another round as time ran out. However, this didn’t stop Titan from coming back big, picking up round after round once more and bringing the score to 9-2 before another round went to C9. Afterwards, the Americans became pretty unlucky as Hiko won a 3v1 clutch only to miss defusing the bomb by mere moments.

11-4 was the scoreline at half time before the sides were switched. C9 had the better start here, breaking Titan’s line to take the first three rounds home, before Titan fought back to take their 12th round. Cloud 9 started closing the scoreline, taking another three rounds in a row and the score to a close 12-10 in Titan’s favor. But once again Titan struck back to take the score to 14-10, before a very offensive round by Titan almost made them lose it to only semi-equipped C9 players, giving Titan a set of five match rounds. All of those five rounds went into the hands of the Americans, bringing the game into overtime. After losing those five matchpoints, Titan only managed to take a single round as CT in the overtime, letting the score go to 17-16 in favor of C9. However, a solid T half for Titan saw them bringing the game to a second overtime in brilliant fashion. Again, C9 had the better start even though ScreaM was close to winning a round on his own. C9 won all three CT rounds, and only needed one more of the overtime rounds to end the game. It was seM who managed to take the final round for Cloud 9 and thus claim the win in a double overtime 22-18 marathon.

Titan now had to face Vox Eminor in the deciding match. Both of them had to live with a fourth place at Katowice, so dropping out this early was something neither of them wanted. Starting as CT, Titan were able to bring as many as nine rounds home before VoxE were able to respond with the first one to their account. But as expected by most fans, this was the only round that the Australian managed to score as T. With Titan winning the crucial pistol round as Terrorists, the game was done and the map closed at a score of 16-1.

VoxE said goodbye to the tournament, once again placing last in their group. Their match against Titan especially was a bitter pill to swallow, but NBK and his team really helped make the fans forget how they dropped out in Katowice. With both Dignitas and Titan up against them, the situation was far from being good for the Australians from the start.

Check the full group stage score on the ESL One homepage. What sort of results are you looking forward to seeing tomorrow? Tell us in the comments below!