What to expect at Intel Extreme Masters in Shenzhen

Intel Extreme Masters in Shenzhen is the first event after the close of the previous breath-taking season in Katowice, and one where we’ll get to see three different tournaments in three different games as their respective teams fight it out to be named champion. With five days packed with plenty of StarCraft II, Hearthstone and League of Legends action, Intel Extreme Masters Shenzhen is sure to deliver some incredible games that will be talked about for a long time afterwards.

With 4,000 WCS points on the line as well as US$25,000, Shenzhen will be bringing you five days packed with nail-biting StarCraft II matches featuring some of world’s best players. Kicking off with the open bracket, Wednesday will see who’ll make it to the group stage to take a shot at the prizes. With the likes of NesTea, HerO, jjakji and Revival all set to compete, it’s definitely worth watching.

Thursday and Friday will see the best four players from the open bracket join the groups, where San, INnoVation, Snute, Jaedong and MMA will be waiting for them. On Saturday and Sunday, the best-performing players from the group stage will join the playoffs and bring all they’ve got to get their hands on those WCS points as well as two tickets to the Intel Extreme Masters World Championship. Both grand final contenders will earn a spot, and will be around when we look for the new Intel Extreme Masters World Champion.

Find information on all three stages at intelextrememasters.com.

From Wednesday to Friday, Gnimsh, StrifeCro, Amaz, MaSsan, Rdu and others will be facing Asia’s best Hearthstone players. Starting off in four groups of four on Wednesday, the top two of each group will advance to Thursday’s quarter finals. On Friday, the final hours of stage time will be dedicated to bringing you the semifinals as well as the all-important grand final. 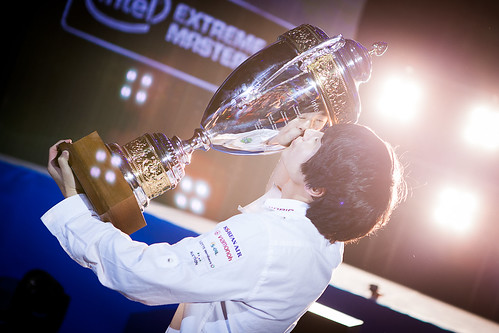 Who does his first step towards this trophy in Shenzhen

Not much is known about the Asian Hearthstone players joining the scene in Shenzhen, so the Europeans will need to be well-prepared and open-minded in order to adjust to whatever comes their way. Will the current meta work in Shenzhen, or will it be new or less often played decks that see success?

Read more about Hearthstone in Shenzhen in our “Deck lookout” or “Big week in Hearthstone“ articles.

Last but definitely not least, League of Legends will also be at Shenzhen, with Edward Gaming and World Elite – two of China’s biggest teams – set to face off. While Edward Gaming took down fan-favorite OMG 2-0, World Elite and Invictus Gaming had a tough battle as they fought for the chance to compete onstage at Intel Extreme Masters Shenzhen. However, it was World Elite who came out on top, winning 2-1, and it is them who’ll be playing in the last match of the event on Sunday.

As well as the US$5,000 prize pool, the winning team will also get a ticket to the League of Legends World Championship to compete for the title previously won by the KT Rolster Bullets. There’s a lot on the line for these two teams, so they better bring all they’ve got for the final game of Intel Extreme Masters Shenzhen!

Want to know more? Get further information and updates on the Intel Extreme Masters Twitter and Facebook page.

Which games are you looking forward to the most? Let us know in the comments below!