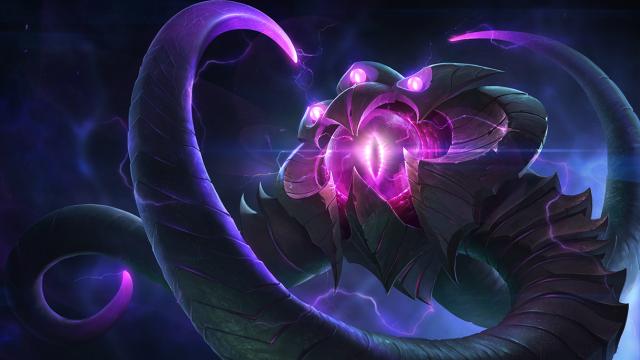 Yesterday, Riot revealed their first champion release of the year: Vel’Koz. He will be the next champion to employ a theme we last saw with the release of Kha’Zix in September 2012: the Void. Remarkably, Vel’Koz is a ranged DPS mage carry. Since the beginning of 2012, Riot has seemed to stray away from the classical mage carry archetype, with only 4 out of 27 champions released in this time boasting the typical characteristics of being long ranged, dealing heavy damage and being particularly vulnerable up close. These champions have largely been out of favor throughout the last metas. With mobility being the defining trademark, we have seen most classic AP carries falling off. Let’s take a look at Vel’Koz.

Vel’Koz’s passive is Organic Deconstruction. Every damaging ability applies a stacking debuff called Deconstruction on his opponents for 7 seconds. Upon reaching three stacks, the debuff is consumed and the target takes true damage based on Vel’Koz’s level. Vel’Koz’s basic attacks refresh the debuff duration but do not add stacks.

Vel’Koz’s Q is Plasma Fission, a 1050-range, 7 second cooldown, non-targeted projectile nuke that slows the target hit by 70% for 1 to 2 seconds (scaling with rank). Upon either hitting an opponent or reaching its maximum range, the projectile splits and releases two projectiles with identical properties in a 90 degree angle both ways.

His W is called Void Rift. Void Rift is a 1050-range, linear area of effect skill that deals damage to targets hit. After a short delay, the trail it leaves behind detonates, dealing damage to enemies standing on it. Although this skill only has a 1.5 second cooldown, casting it also requires a charge of Void Rift. The charge time on Void Rift stacks is 19 to 15 seconds (scaling with rank) and appears to be affected by cooldown reduction. Vel’Koz can store up to two charges. Notably, this move can be cast while moving.

His hard crowd control is provided by his E: Tectonic Disruption. Vel’Koz targets an area within 850 range. After a short delay, enemies within the area receive moderate damage and are stunned for 0.75 seconds. Enemies closer to Vel’Koz are knocked back a short distance instead. Its cooldown is 16 to 12 seconds, scaling with level.

Lastly, his ultimate: Lifeform Disintegration Ray. Vel’Koz roots himself in place and fires a laser in the direction of the cursor for 2.5 seconds, slowing all enemies hit by 20%, dealing damage in 0.25 second intervals and applying a stack of Deconstruction every on every other hit (so up to five over the duration). Minions take 500% damage. 1575 range.

Vel’Koz has no pretension of being mobile, and employs only average means of peeling enemies off him. With most of his kit having over 1000 range, however, it would appear that careful positioning should keep him safe in team fights. His role seems to mostly be a damaging one, having little significant crowd control. Judging his damage output is a tough one, however, since a substantial part of his damage is reliant on making optimal use of his true damage passive, which compensates for his merely average ability power scaling.

Although Organic Deconstruction does not scale with ability power, it benefits from cooldown reduction as the stat allows for more frequent applications of the debuff. His passive is what makes him stand out from all classic mage carries we have seen so far: none of them have yet featured consistent and substantial true damage. This provides Vel’Koz with a means to take down sturdier targets. Notably, all of his abilities have the potential to affect multiple targets, giving him huge damage potential depending on the team fight dynamics. His ultimate has massive range and very respectable base damage. Landing a full hit on a target will also guarantee triggering his passive at least once and setting it up to be triggered a second time.

Cooldowns appear to be an influential resource. None of his abilities have a cooldown to write home about. With the way his abilities interact with one another through Organic Deconstruction, having just one of them on cooldown can have great consequences for his damage rotation. As such, whether or not Vel’Koz is in a position to actually go for a high priority target is of extra importance when it comes to his damage output. Vel’Koz players will have to think ahead when it comes to using their abilities. Using both charges of Void Rift to clear a wave, for example, can result in a relatively large time window of greatly diminished burst damage, what with one charge being a potential two stacks of Organic Deconstruction.

Time will have to tell whether Vel’Koz’s design can survive the current meta. He lacks burst damage as his kit has no strong upfront damage but instead relies on a relatively slow passive stacking mechanic. Moreover, his lack of mobility may prove disastrous when he finds himself all-inned on. He may need a team built around him in order for him to work well.

In any case, AP carry players will be happy to see their class pool expand with this refreshing addition to League of Legends’ champion roster. We’re looking forward to seeing him on the live servers!