The return of Team World Elite

Friday’s second group B matchup finds new kid Cloud 9 HyperX squaring off against relative old timer World Elite. Both teams are going strong at the moment, with Cloud 9 HyperX having achieved second place in the North American LCS and World Elite having had an impeccable start in the LPL but dropping to second place after losing four out of six matches last weekend.

Cloud 9 HyperX doesn’t require much of an introduction. They took the North American LCS by storm during the season 3 summer split, going 25-3 and winning the summer playoffs without dropping a game. However, they don’t look as invincible during the current spring split, having gone 16-4 so far. Contrary to their successful regional run, their international appearances didn’t live up to fans’ expectations, having lost their only set at the Season 3 World Championship 1-2 against Fnatic. Their second international appearance would be at Intel Extreme Masters Cologne in November, where they got knocked out by Gambit Gaming after losing two games in succession. Neither of these losses can be considered particularly embarrassing considering both of these teams were in top shape when Cloud 9 HyperX faced them. Additionally, at the Battle of the Atlantic, Cloud 9 HyperX took their revenge on Fnatic by beating them 2-0.

Because of this, however, the team never got the chance to prove themselves on the world stage. Their first seed at the World Championship meant they skipped the group stage while Cologne didn’t feature one in the first place. Fans have been wanting to see the North American favorite take on some more extranational names, especially Asian ones. Both Gambit Gaming and Fnatic have always been known to give the Asians a run for their money during offline events, and Cloud 9 HyperX’s fans expect their team to do the same.

World Elite has had a rough time lately. Since its founding in 2011, the team has boasted dominant regional results despite the several roster swaps. Their international appearances weren’t impressive, however. Their AZUBU Champions Summer 2012 participation ended in a loss to CLG.EU in the quarter finals, and they placed 5th-6th in the IPL San Francisco Showdown, losing to Team Legion and Team Curse. Right before the Season 2 World Championship, the team completed its all-star roster of CaoMei, Clearlove, Misaya, WeiXiao and Fzzf. The new lineup went in as a potential top dog to win the tournament but were defeated by CLG.EU in a legendary rematch.

After this disappointing run, the team then went on a killing spree. For several months, they went nigh-undefeated, winning IPL5 convincingly and beating an impressive list of top tier teams: AZUBU Blaze, Moscow Five, CLG.EU and Fnatic. Notably, they had to play the latter three times this tournament: once in the group stage and then in both the winner’s and the grand finals. The total match count would end in 6-2 in World Elite’s favor. However, they dropped off during the second half of 2013, which culminated in major roster swaps at the end of the year with long-time midlaner Misaya retiring while Clearlove and Fzzf were benched. The new lineup didn’t do anything amazing until a couple of weeks ago, when it started to wreck the LPL 2014 spring season. Their previous lineup qualified the team for Katowice by winning the Shanghai qualifier over the likes of OMG and Invictus Gaming. 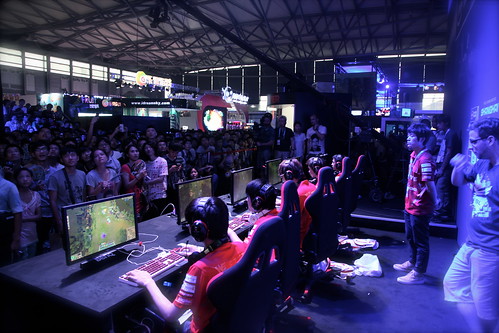 Both teams have a lot to win here. World Elite seem to have risen from the ashes of their former selves and are ready to show the world – and themselves – that they are once again able to uphold their namesake. Meanwhile, Cloud 9 HyperX will try to seize their opportunity to topple Asia’s best.

”This is by far the hardest first round game to call. Cloud 9 HyperX are currently second place in the North American LCS but crucially went 4-0 in the Super Week on the 4.3 patch that we will use in Katowice.

We feel that World Elite might be slightly stronger on paper, what with them currently being second in the Chinese LPL, but it’s hard to judge with the Chinese scene currently behind on patches. They will be something of a surprise package coming to Katowice and should not be counted out. We call Cloud 9 HyperX to take victory in this one based off what we currently know.“

The teams will face off on Friday at 18:30 CET. Make sure not to miss the action being streamed live on twitch.tv/esltvlol!