The ESL ESEA Pro League has been providing us with plenty of top-notch CS:GO action over the past few weeks. With the season now halfway through, we sat down with ESL commentators Joe Miller and Leigh “Deman” Smith to pick their brains about the ups and downs the league, EU versus NA and which players and teams to keep an eye on.

ESL: The ESL ESEA Pro League is already halfway through. How did you find the matches so far and which did you enjoy the most?
Joe Miller: There have been some absolutely fantastic games to watch. I have to say my favorite is probably the Titan versus Na’Vi game that I cast with Deman on Tuesday. A fantastic game with crazy clutches, eco round wins and some sick noscopes to finish!
Leigh “Deman” Smith: We’ve had some great games so far – the league is really starting to shape up. NiP managed to turn their form around and climb to the top of the table alongside Team SoloMid. The next few weeks should be a great close to the season.

ESL: The fight for the top positions in both Europe and North America is on. Did you expect to see this many teams compete on this level?
Joe: On both sides of the pond, the playoff race is insanely close! The top four in Europe only have three points separating them and there are less than seven points between the second to seventh places in North America. The remaining weeks are going to be really interesting to see who manages to pull through!
Deman: In Europe I’ve no clue who will qualify still – there are at least eight teams still easily in the running to make the finals in July. Over in North America it’s starting to become a little clearer, but there are still six teams fighting for those four spots.

ESL: There are still three match weeks ahead of us. Are there teams in particular you think the fans should focus on?
Joe: For me: VP, EnvyUs and Dignitas are the three teams to watch. They’re sat outside the top four but have a couple of games less on the board than the top four. They’re going to make the top of the table very cluttered soon!
Deman: Na’Vi have definitely stepped it up over the last few months since bringing in flamie and winning the Pro League in April. Virtus.Pro also have a good few games in hand and have already recorded some big wins in the League over NiP.

ESL: In July we will get to see the finals of the ESL ESEA Pro League’s very first season – only the top four in each division will make it to Cologne. Do you think we might see any surprising names on that list?
Joe: I think the biggest problem is that we will be surprised that some names aren’t on the list. Any of the top eight would make for great finals, but four of them are going to trip in the final weeks and miss out on a spot at the finals in Cologne.
Deman: The big issue, certainly for Europe, is that four places aren’t enough. On their day, any of the top six teams in the League currently could go on and win at the finals, which will make the final weeks of placement matches really tense.

ESL: How do you see the upcoming clash of Europe and North America shaping up? Do you think the NA teams can take the EU teams on head to head?
Joe: I think that a well-paid, well-structured league like the Pro League is only going to help the North American scene develop. However, I still believe that they are some way off the pace of the Europeans. I think if you put the current top four from each region into a tournament this weekend, Cloud9 might be the only real contender for upsetting the Europeans. I hope and think this will change in the future, though!
Deman: I would love to see the NA scene develop into a healthy competitive one and challenge EU, and judging by the current league table it’s slowly getting there, but I believe the season one finals in July will be too soon. EU is currently so strong and has swept NA aside in the last few months’ meetings at offline events.

ESL: ESL One Cologne is getting pretty close already. Taking into account all the latest results, which teams do you see as being favorites for the big matches in front of the crowd at the LANXESS arena?
Joe: The beauty of the scene is that we have so many great leagues and events that although August is calendar-year close, it’s still a good while off in terms of the CS:GO calendar. There are some big events between now and then that will shape who is on form and working hardest towards the LANXESS Arena. My tip would be that NiP are going to hit winning form again real soon!
Deman: It’s incredible how close the top echelons of the scene are right now in Europe – we’ve already had six to seven different winners at offline events this year. No team has really dominated enough to be considered the outright favorites, and we know teams always take extra time to prepare for the Majors. If I had to put my money down, I would say Fnatic will step up once again. However, they need to get passed their bogey team TSM first! 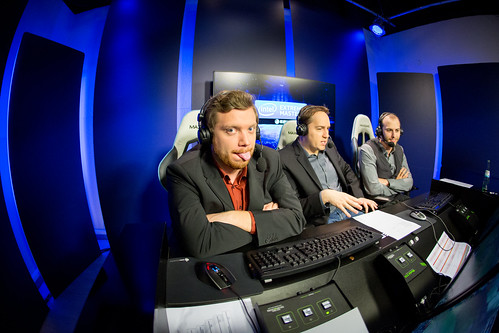 ESL: Thank you very much for your time, guys. Any final words on how the ESL ESEA Pro League is unfolding?
Joe: Just a huge, huge thank you to everyone who has been tuning in to the shows and enjoying the content that we bring to you!
Deman: Thanks to everyone who has enjoyed the season so far – I’ve really started to enjoy my time doing the weekly show and hope that you’ve enjoyed watching.

To find out more about the ESL ESEA Pro League, be sure to visit the event’s official site, and follow Joe and Deman on Twitter for more of their expert insight.