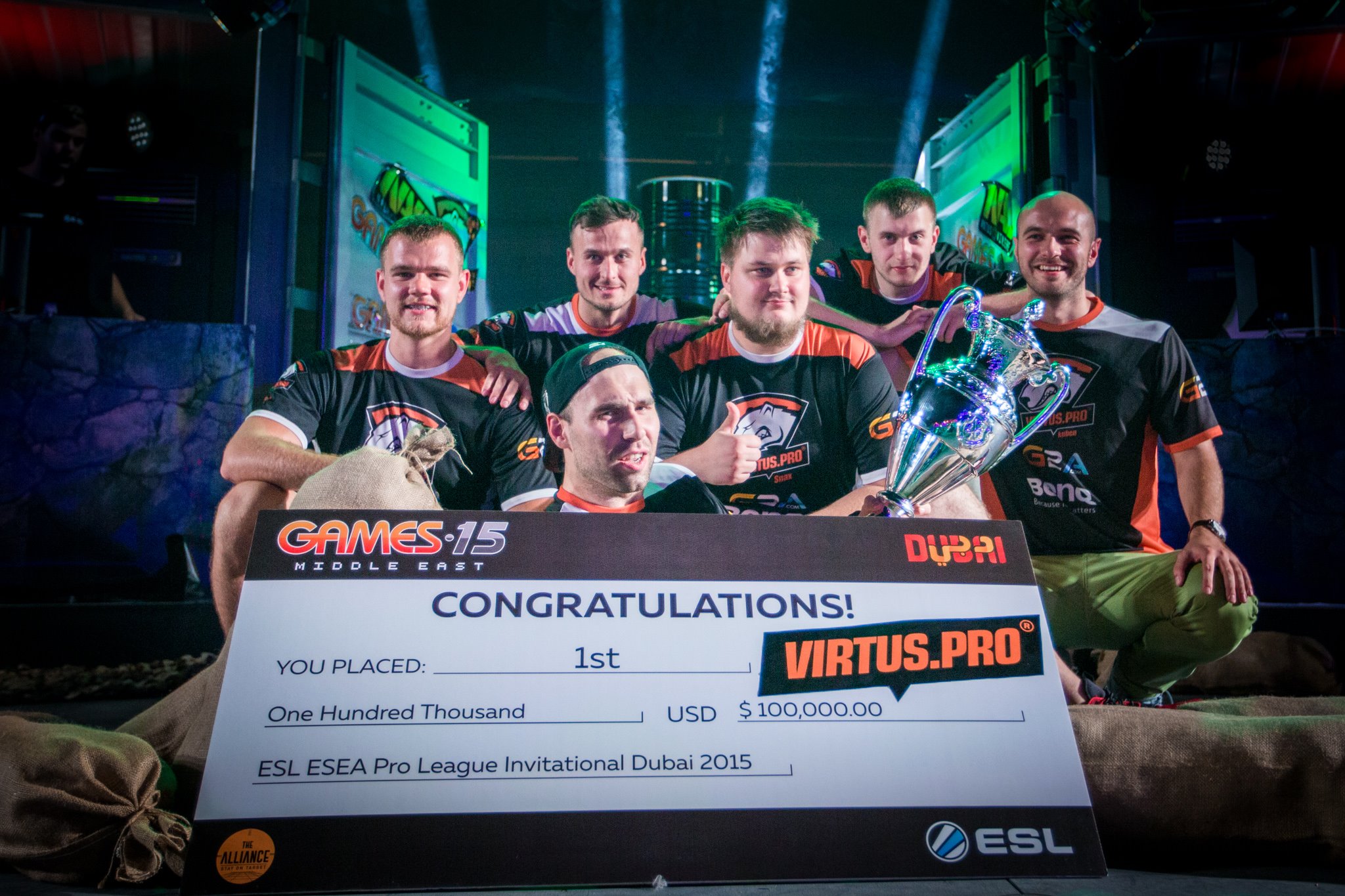 After an exciting group stage and even more thrilling playoffs, the time has come to determine which team will emerge victorious at the ESL ESEA Pro League Invitational in Dubai and the trophy, as well as the lion’s share of a US$250,000 prize pool. It was Virtus.pro and Team SoloMid who proved to be the best among the attending teams – the two CS:GO giants clashed in a grand final to remember.

With TSM picking Overpass as the first map and also getting a CT start, we kicked off game 1 of the grand final. TSM got off to a good start through good team play, which continued throughout the map. Virtus.Pro responded by hitting the B bomb site in every way imagineable, using lightning quick run and gun techniques which they mixed up with smoke wall executes. TSM had a hard time keeping a hold off the B bomb site which didn’t give their rotating teammates enough time to come to the rescue. Virtus.Pro eventually decided, without ever experiencing real resistance to what they did, to switch things up and focus on the A bomb site. TSM’s defence on A was a lot stronger and more versatile, they pushed up to party with Nicolai ‘device’ Reedtz for early aggression which they then switched up by holding the site from bank and truck. This versatility cost VP the first half, which ended 5-10 in favour of TSM.

With the rounds on the board, VP knew they had to analyze and adjust. Switching up their defence round after round seemed to catch TSM off guard. From heavy aggression to map control, VP was clawing their way back into this map. TSM employed the same strategies as VP did, from blitzing the B bomb site to smoke executes. VP started to show small cracks during the later stages of the second half, not being able to make the best decisions every round prevented the ever so important economic advantages from being built up. That same economical advantage that VP didn’t have, TSM didn’t either. In the end VP was unable to keep a hold of the bomb sites and lost map 13-16 to TSM.

Up next was VP’s pick of Train. With a CT start for the Poles, they got off to a rough start, losing three of the first five rounds. This got turned around fast as VP played a very control heavy defence, denying space from the TSM members and preventing TSM from getting any pick offs. TSM relied heavily on getting picks, which hardly ever presented themselves, and were unable to break open the bomb sites. VP had an age-old buddy system going on for the outer bomb site, covering each others backs. TSM tried to slow play the majority of the first half which resulted in VP retaining full control over the bomb sites. This all resulted in an 11-4 first half for VP.

With their eyes on a map win, Wiktor ‘TaZ’ Wojtas and Janusz ‘Snax’ Pogorzelski opened and secured bomb sites with confidence. TSM started to become desperate, force buying several rounds in a row in an attempt to catch VP off guard and steal away a round. VP had other plans, executing onto bomb sites with the same speed as they did on Overpass, they overwhelmed the TSM players and eventually broke them. VP won map 2 with a 16-7 score.

With a map won by each team, the match went to TSM’s second choice of maps, Dust 2 – a map which they’ve been deemed by some to be the best in the world at. With a CT start, the Danish squad of TSM went on their way. They showed great understanding of VP, switching up their defence on the go. VP tried to approach the map more methodical, relying on picks and generally playing at a much slower pace than previous maps. TSM made good use of this anomaly in VP’s play, setting up for the aim duels that VP were looking for and winning them. TSM took the first half 3-12.

With the clear statement that Dust 2 is TSM’s turf, the Danes quickly mopped up the last few rounds required, without dropping a single round. The map ended in a landslide 3-16 score for TSM.

A chance for VP to equalize the score came on Cobblestone, getting a CT start. TSM started off strong, rushing down the bomb sites and overwhelming VP. The Polish side adapted to the pace through some stellar play from Snax, who single-handedly stopped the rushing Danes dead in their tracks multiple times. Once VP stabilized and found their groove, they quickly took the remainder of the first half, ending it with a 9-6 advantage over TSM.

The second half came by and the Virtus.Plow started rolling, blitzing past any hold that TSM tried to execute. With the drop-down room in high contention the Danish squad was unable to adjust to the pace set by VP. The overwhelming force of VP secured them enough momentum to close out the second half with only a single round loss. The match was now all even after a 16-7 win for VP.

With the decider taking place on Mirage, Virtus.Pro started off on the CT side. After a small bump in the road during the first few rounds, VP picked up where they left off during the previous map. An amazing performance by Snax, firing and landing AWP shots left, right and center, stopped everything TSM could throw at VP. TSM attempted to dictate the pace, throwing executes and rushes at the Polish squad but without the economy to back it up. We saw many force buys which got cleaned up easily by the VP side. VP had all the space to switch up their conservative buddy system defence with aggressive pushes up mid to get control. This resulted in a 12-3 first half for Virtus.Pro.

The second half turned into a down right fragfest with many chaotic rounds. TSM were able to stabilize the pace, fending off executes and picking up clutch rounds. VP had a rough time managing their economy and were forced to slow down their tempo. With the match drawn closer to the last rounds, VP started to break the TSM bank that had slowly built up. Even after Xyp9x threw a spanner in the works of a VP after plant situation the Polish side managed to keep their mental fortitude and push through for the win. VP took the deciding map with a 16-14 score.

Thank you for an amazing event!

Virtus.pro and Team SoloMid delivered a thrilling grand final, showing everyone world class CS:GO. Thank you to everyone who attended the event live in Dubai and tuned in online. Thank you to the fantastic teams and everyone who made this event happen. Finally, congratulations to Virtus.pro for a well deserved victory!

The Dubai Invitational was a kick off to season two of the ESL ESEA Pro League which begins next week, on September 15th! Don’t miss any of the action – for all information visit the league’s official website and follow @ESLCS to stay updated.