SK Prime, Lublin Shore and Gamers 2 fight for the top

With a new system introduced that includes a group stage and the playoffs for the summer season, the Black Monster Cup has take a huge step forward, and is fast becoming like a second home for European Challenger Series teams fighting their way to the top.

With the final matches tonight, we’ll get to see four of the EU Challenger League’s quarter finalists facing off as SK Gaming Prime, Lublin Shore (formerly mousesports), Gamers 2 and Unicorns of Love vie for the top positions from 18:00 CEST tonight.

The beginning of this League of Legends-packed evening sees former SK mid laner ocelote and his team trying to secure the third place spot in this season of the Black Monster Cup. After struggling in the spring season and only making it to fourth place in the Spanish qualifier, ocelote has got his team back on course again. However, losing the semifinals to Lublin Shore was nothing to worry too much about as the Polish are well known for their strong plays. 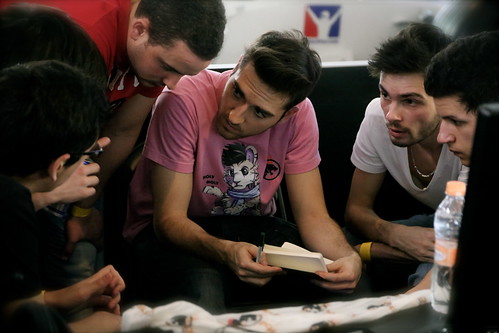 Now facing dark horses Unicorns of Love, his team has already earned a spot among the current best-performing teams of the Challenger Series. Taking the third spot would not only mean higher winnings but also a good morale boost for the upcoming Challenger Series quarter finals. However, Unicorns of Love are also looking to bolster their morale as they’re about to face Ninjas in Pyjamas with their new all-star lineup featuring Alex Ich later this week. With €1,750 also up for grabs, a hard fight and good matches are almost guaranteed.

SK Prime or Lublin Shore to take the title?

Fighting for the title are two teams that couldn’t be more different. Lublin Shore, formerly known as mousesports and MeetYourMakers, have stuck together throughout recent years with almost no roster changes. SK Gaming Prime, on the other hand, was once “Zyzz is alive”, and is now going by the well-known team name of SK’s Challenger Series division.

As both teams still have more than a week of preparation before their Challenger Series quarter final matches, we might see them testing some team compositions that could surprise not only their opponents but also viewers alike. With €7,500 on the line, it will be a hard series tonight, with this match possibly giving an impression of what challenges the current LCS teams are have ahead of them. Both teams are pretty excited, as their managers told us before the matches. kiTTz, manager of Lublin Shore, said:

“The summer edition of the Black Monster Cup has so far been very successful for us. Unfortunately, the tournament cannot be called a complete triumph when you don’t stand at the top of the podium. The Challenger scene is really close right now, and every team can beat anyone. In my opinion, a winner will be decided by their form on the day. SK Gaming Prime is a strong team, but I think that experience will prevail on our side.”

Meanwhile, InnerFlame, the manager of SK Prime, said of the upcoming final:

“We are really pumped in the lead-up to tonight’s final – a lot of money is on the line so we have been practicing hard for this and treating the preparation the way we should before any big final. I’m really confident that we will win – our form has been really good recently. I hope all the games are exciting!

SK Prime started the group stage with the previous lineup and they performed really well in the group stage. Unfortunately, some players had felt that they had come to the end of their competitive careers and that the team couldn’t carry on. I’d like to thank them for their contribution to securing the first place seed. The new lineup had a lot of hard work to do in the knockout stages, and I was very impressed by their performance.

Overall I’ve been really happy with how the season has gone. I’d like to give a special thank you to Western Digital, the organisers and staff of the BMC for running the tournament very well, the excellent prize pool, the great exposure and for investing in the Challenger scene. I can see the BMC developing into one of the biggest tournaments internationally if it carries on the way its going.”

Starting at 18:00 CEST with the third place decider, Jason Kaplan will bring you almost six hours of the best Challenger plays live on ESL TV. Enjoy the last matches of the season and see which of those four top tier challenger teams will finish their season victorious. Who will come out on top? Tell us your favorites in the comments below!