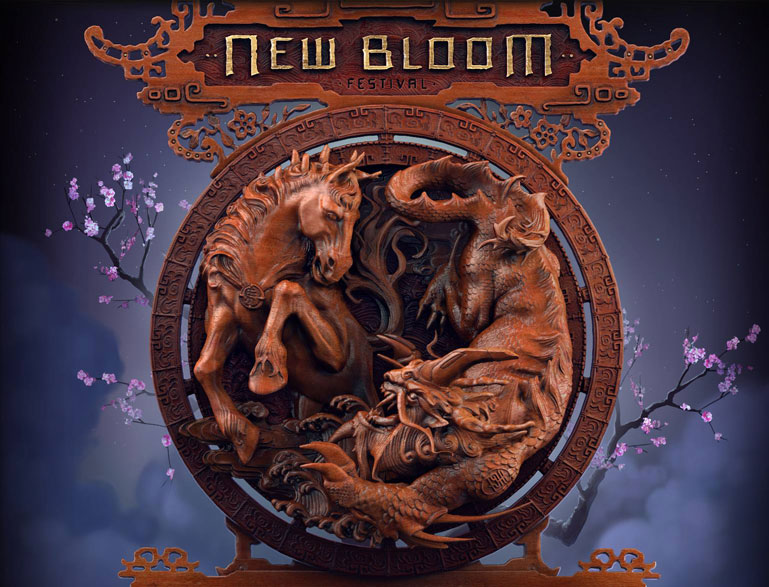 Winter has been starting to show its full glory in the last few days and the cold has swayed many people to stay inside. It could, however, not come at a better time. Snow might be falling outside, but in the mystical world of Dota 2, Spring is just around the corner. Heralding the Chinese New Year in style, the Dota 2 client has been updated to prepare for the Year of the Horse.

The first thing you might notice when playing your next game of Dota 2, is how festive the map now looks. The Eastern influences can be seen everywhere, from the beautiful lanterns to the dragon-faced towers. As the cherry blossoms leaves decorate the battlefield, an air of peacefulness can be felt and for a moment you might forget that you came to make war and not love. As you finally awaken from your dream-state and realise that there is a battle going on, you might see some new faces. The patch did not only ring in the new season but also brought in two new heroes.

Terrorblade is the definition of a badass. The demon marauder stole from the Demon Lords and was sent to the depths of hell because of this, but this wasn’t just any hell, this was a special kind of hell. The hellish prison, Foulfell, forced its inmates to stare into twisted reflections of their own soul and make them suffer. Yet suffering was not what Terrorblade did there, as he mastered his reflected worst self and returned to the favour to the Demon Lords and the rest of the world.

Terrorblade is an agility based carry with a very interesting set of skills. His first ability, Reflection, can be seen as Phantom Lancer’s Diffusal Lance, except that it doesn’t do impact damage and that the range is a lot lower. The ability slows the opponents attack and movement speed, while also creating an unkillable, untargetable illusion, reflection, of that unit.

Conjure Image, the second ability, is the most straight forward as it just creates an illusion of Terrorblade, with a 16 second cooldown and a 32 second duration, this can mean that Terrorblade creates two of these to assist him. The interesting part comes in when you see his third ability Metamorphosis.

Comparable to Dragon Knight’s ultimate, Metamorphosis transforms Terrorblade into a powerful Demon with a ranged attack and extra bonus damage. The illusions will also take this shape. With a cooldown of 140 seconds, this ability feels and looks like a second ultimate. Terrorblade’s actual ultimate is Sunder, allowing him to swap health with friend and foe. Going trough magic immunity and also applying a ministun makes this a really strong ultimate. Hard to kill and hard hitting in the later stages of the game, he needs to be dealt with early and coordinated.

Check out DotaCinema’s Spotlight on Terrorblade:

Phoenix, an infant son of the suns, studied and inquired the world and through chance learned about the enduring conflict in it. Eager to help out where he could, he took on a terrestrial form and headed down to the battlefield. Now he shines his warmth wherever it seems darkest or on whomever deserves to feel the heat.

The ranged strength hero, one of the few in its kind, has a large AoE presence with a focus on staying alive and dealing a lot of damage. Phoenix doesn’t spend a lot of mana to use his skills but rather relies on his own HP. His first ability, Icarus Dive allows him to dive in an arc to a location at a fixed distance and then return. Any enemy he comes in contact with is slowed and receives damage over time. Phoenix is also able to auto attack and use skills during this dive.

Fire Spirits, his second ability, allows him to shoot four fire spirits, independently at a targeted AoE. These deal damage over time for four seconds while slowing the opponent’s attack speed. Shooting another spirit at an already burning opponent will reset the timer on the damage over time. Both Fire Spirits and Icarus Dive cost 15% of Phoenix’s current HP.

The third ability, Sun Ray, fires a massive beam of light in front of Phoenix, damaging opponents and healing allies in its path. After an initial mana cost of 100, the beam will travel for 1300 range with a 130 AoE. All enemies in its path will take a certain percentage of their maximum HP as damage per second while allies will be healed for half of that. Every second Phoenix uses this skill, he takes 6% of his own current HP as damage, but the skill is limited to 6 seconds anyway.

His final ability and ultimate is Supernova. Like the legend of the Phoenix, all ends with beginnings. Phoenix takes his own life for a chance to be reborn, transforming into a burning sun. In a massive 1000 AoE, he deals damage to all enemies for a six second duration. If the sun is not destroyed in time, the six second duration, then Phoenix will be reborn, fully regenerated, abilities refreshed and all opponents will be stunned. The downside is that if the sun is killed, it requires a certain amount of hits to kill, Phoenix will be killed as well.

Check out DotaCinema’s Spotlight on Phoenix: