It was Na’Vi and Vici who had the honor of kicking off the first series of ESL One New York this Thursday. The two Dota 2 heavyweights last faced each other during the group stages of The International 4, with Na’Vi winning that particular best of one series. However, both teams have undergone heavy changes since then, delivering some spectacular games to start off ESL One New York with a bang.

Game 1: The return of Crystal Maiden?

The first game started off with no huge surprises during the initial ban phase, but Na’Vi’s second pick, Enchantress, lead VG to an unusual counter-pick, giving Crystal Maiden a rare pro Dota 2 appearance. Another notable pick was the new and improved Ogre Magi, picked up for Vanskor by Na’Vi.

The early game saw Vici Gaming utilize a dual Dire safelane with Brewmaster (Super) and a part-time jungling CM (fy) up against Razor (XBOCT). Instead of an offensive trilane, Na’Vi chose to use their Ogre Magi and Enchantress (fng) as roaming supports, without much success in the early game. The mid lane had Dendi on Ursa going toe to toe against a Morphling and Lich dual lane played by Black^ and Fenrir, leaving the bot lane with a 1v1 matchup between Timbersaw (Iceiceice) and Undying (Funn1k ) on his safelane. While Na’Vi’s support rotations didn’t yield the kills they wanted, a first blood in the bot lane for Funn1k and a 6 minute Roshan kill for Dendi resulted in VG losing all their tier one towers by 15 minutes. 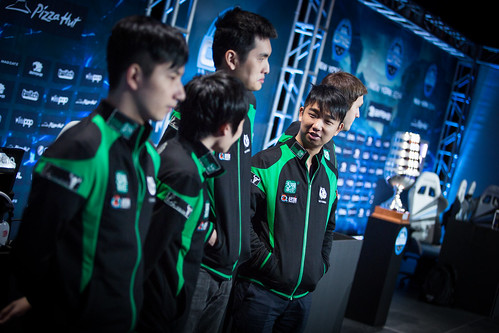 While Na’Vi kept going for objectives as a team, the cores on Vici Gaming’s side managed to farm up fairly incontestably, leading to an 8 minute Blink Dagger for Brewmaster and a fast Bloodstone for Timbersaw. Unsurprisingl,y though, it was Black^ that led the net worth chart with his free farming Morphling. Not even a second Roshan kill for Ursa could help close the gap, thanks to VG picking off Dendi shortly after in his own jungle and bringing him down twice in quick succession. This saw VG dictate the pace from here on out, getting their own tower kills and opening up the map. Now in the driver’s seat, Vici took the third Roshan plus cheese and crushed Na’Vi in the follow-up fight in the river, nearly team wiping the Europeans.

With all three cores in the Vici Gaming lineup leading the net worth chart, the map advantage in their hands and a significant kill lead by 35 minutes, nothing could stop VG from pressuring high ground in mid lane. The underfarmed Na’Vi failed to mount a passable base defense against the overwhelming burst damage from VG and proceeded to lose both the mid and bottom racks as well as most of their heroes, leaving them no choice but to GG out of the game. Thus Vici Gaming take game one against Natus Vincere in convincing fashion!

Game 2: Back to the basics

With the pressure on Na’Vi for the second game of the series, they chose a teamfighting lineup: Death Prophet (Dendi) mid, Weaver (XBOCT) in the offlane and Tidehunter (Funn1k), Bane (Vanskor) and Treant (fng) up against VG’s patented Brewmaster and Crystal Maiden, as well as an Io/Tiny combo mid for fy and Iceiceice. The last pick for Vici Gaming was Nature’s Prophet on Black^ for their Radiant offlane.

Unlike the first game, Na’Vi’s rotations made a huge difference in the early game. Pulling Bane mid to support Dendi against the Io/Tiny dual lane got the Death Prophet off to a huge start, going 3-0 in mid. This momentum carried over to all the other lanes for Na’Vi, who proceeded to set the pace across the map after switching Weaver to the safelane to secure his farm. By 16 minutes, their five man push had taken all VG’s tier one towers and given them a 10-4 kill advantage. 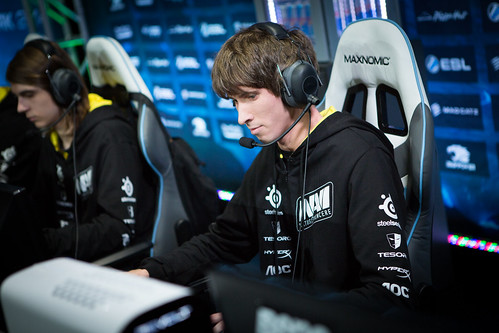 Nothing that VG threw at the Na’Vi deathball seemed to affect them in the slightest, with the synergy between Ravage, Overgrowth and Exorcism seeing every team fight go in their favor. By 21 minutes, the star-studded VG team was already down 10k in both experience and gold. With no map control and no way to fight into the Na’Vi lineup, all the aggression came from the Europeans, who were fighting for their tournament lives and seized their chance to breach high ground in the mid lane at 27 minutes. Teamfight advantage in hand, they easily wiped VG and took their mid barracks, which was enough to force an early GG and tie up the series at 1-1. Na’Vi prevailed against Vici Gaming, forcing an all-deciding game three!

Game 3: All or nothing

The do or die game of the series, where the winners advance to the semifinals and the losers get to enjoy the New York city scenery. For the third time straight, Batrider and Terrorblade got banned out during the first ban stage. Vici Gaming picked up a Skywrath Mage support and Elder Titan offlane, going for a damage amplifying strat with Bristleback as their farming carry, Razor in the mid lane and Sand King farming the jungle. Na’Vi secured themselves a Luna for XBOCT and a Rubick lane support, as well as Brewmaster/Witch Doctor for mid plus Centaur as the solo offlane – 2-2-1 lanes seem to be the name of the game in the new 6.82 patch.

The early game saw both teams even, with both safelanes pushing down their opponents’ tier one offlane tower. However, slowly but surely it became apparent that VG’s teamfight was superior to Na’Vi, mostly thanks to Elder Titan’s Natural Order aura, which amplified their already huge burst damage. With this in mind, Na’Vi was forced to stay in the immediate vicinity of each other due to the constant threat of a teamfight breaking out, which allowed Vici Gaming to farm the whole map and accrue a major gold and experience advantage. Only XBOCT on his Luna managed to stay ahead in net worth thanks to an early Midas. However, the teamfights never seemed to go their way, mainly due to Fenrir’s Skywrath Mage who always prioritized Ancient Seal on Brewmaster to prevent any reliable initiation from Na’Vi. 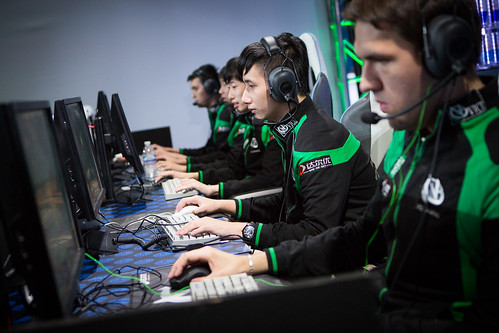 VG’s game plan worked out perfectly for them as there was no answer to their five man pushes into the base, resulting in mega creeps for both top and mid lane. However, as the game seemed as good as over, Na’Vi managed to repel the final push for mega creeps in bot lane on the back of a lot of buybacks. They completely teamwiped VG, who tried to play it safe and disengage, leaving XBOCT with enough money for a Butterfly and Satanic. But even so, it was not enough to hold off Vici’s second attempt at ending the game. On the back of their farmed Bristleback, Refresher, Aghs Razor and Elder Titan aura, they rolled over Na’Vi’s last stand and secured themselves a spot in the semifinals, with their opponent’s final position yet to be determined.

Tune in to the show here!