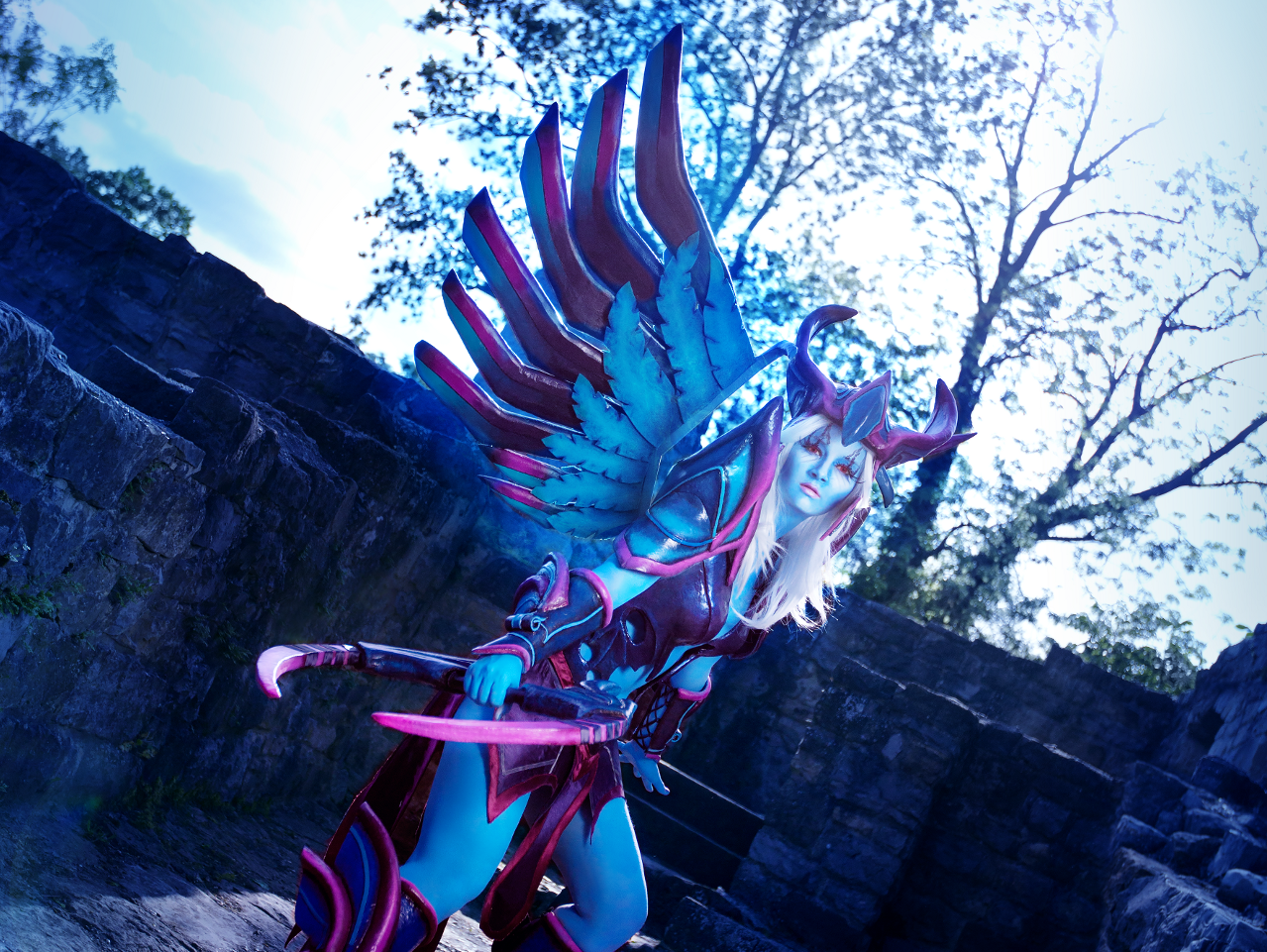 Cosplay is an integral part of ESL One Frankfurt – seeing event participants walk around dressed up as Dota 2 heroes only serves to add to the amazing atmosphere at the Commerzbank Arena. This year’s cosplay competition will give Dota 2 fans a chance to demonstrate their crafting skills and win a share of a €5,000 prize pool as well as meet plenty of other people who share their passion.

One of these people is Meruna – a judge at last year’s ESL One Frankfurt cosplay competition who this year will be switching places and being judged herself. We talked to her about her hobby, judging experience and ESL One Frankfurt itself.

ESL: Hello, Meruna! Can you tell us how your adventure with cosplay began?

Meruna: I just thought about this recently and wow, I don’t remember. Some time after my first visit to Games Convention in 2008, I started following a young and very talented cosplayer on her blog on a German anime page. Today she is one of the – if not the – most well-known German cosplayers out there. After reading her blog and tutorials for a while, I decided I wanted to try it out myself! My first costume was the Seraphim from Sacred 2, which I wore at gamescom 2010.

My current cosplay ‘career’ highlight was probably when I cosplayed Midna from The Legend of Zelda: Twilight Princess at gamescom 2011 and I was interviewed by the official Nintendo Wii channel because they liked my costume so much.

ESL: When did you first get into Dota?

Meruna: I got introduced to Dota by my first boyfriend some time around 2008. I thought “This looks easy” and challenged him to a 1v1 at our friend’s next LAN party and ended up winning even though I bought Vladimir’s Offering on Drow (“life steal” sounded fancy!). In 2011 I saw The International at gamescom and have been following the competitive Dota 2 scene ever since.

ESL: Who is your favourite Dota 2 character and why?

Meruna: Enchantress! I love the aggressive jungling and she’s so lively. My favourite hero in Dota was Viper, but I don’t like his voice work that much in Dota 2.

ESL: What is your fondest memory from last year’s ESL One Frankfurt?

Meruna: The entire event was amazing, but so was the after show party. Dendi unfortunately didn’t want to dance with me but it was great nevertheless. I recommend everyone goes there if there are still tickets available!

ESL: How did you end up on the judging panel at last year’s ESL One Frankfurt?

Meruna: As some people know, my boyfriend was working at the last ESL One Frankfurt. That made it easy for me to contact Turtle Entertainment and ask if they needed any help. I love helping out if I can! I heard what they had planned so far and then offered my help with judging.

ESL: Can you give us some insight into the judging process at the ESL One Frankfurt cosplay competition? How does it feel to be a judge and what sort of things do you pay attention to when evaluating a costume?

Meruna: Last year’s judges were a representative from ESL, workshop artist Anuxi and myself. The rating sheet I developed was based on the sheets used by other German cosplay competitions and takes the overall appearance into account as well as the smaller categories: crafting, sewing, makeup and wig, resemblance to the character and effort. Effort is a very important point as, in my opinion, if two costumes are on the same level craft-wise, the one that has more armour pieces, a more complex design and more details should be rated higher.Having this pretty elaborate rating sheet makes it much easier to judge fairly in comparison with just trying to rank cosplayers or rating them on a scale of one to ten.

ESL: What made you decide to switch roles this year and be a competitor as opposed to a judge?

Meruna: Due to a lack of cosplay partners, I had taken a break from cosplay for a few years – I still followed the scene and my favourite cosplayers and read up on techniques but wasn’t crafting myself. However, last year’s contest inspired me to pick up the hobby again! I am super excited to compete and have my skills compared with those of others.

ESL: Tell us about the costume you’re preparing for this year’s event.

Meruna: The costume I am bringing is Vengeful Spirit’s Vestments of the Fallen Princess set by The Lannisters. Right after ESL One Frankfurt 2014 was over, I was so inspired and motivated to start again that I looked at a lot of different female heroes’ sets. This particular set just caught my eye and I wasn’t able to get it off my mind for days. I started in August and invested all my spare time and a few hundred euros on it and finished just in time for DreamHack Winter, which took place at the end of November. Unfortunately, I didn’t win a prize in the competition there – better luck next time, right? In preparation for ESL One Frankfurt 2015 I’ve made some adjustments, improved my attachments and remade and repainted some parts.

ESL: Why did you pick this particular character? Do you think you share any particular traits with them?

Meruna: I have to be honest and say I picked her solely because of the great custom set – I like how it changed Vengeful to more of a ‘lady’ with long hair. Of course I like playing her (I am more of a support player), but so far I don’t have any plans to murder my sister or her boyfriend 🙂

ESL: What are you looking forward to the most at ESL One Frankfurt 2015?

Meruna: Since the Sunday happens to be my birthday, I invited part of my family to come to ESL One Frankfurt. They are not into video games and cosplay at all, but I would like them to see me and the whole event to get a better understanding of what I’m doing and why I’m doing it. Of course I also look forward to meeting any other attendees excited about cosplay! It’s really the people that make a good event great.

ESL: Which team are you going to be supporting in Frankfurt and why? Do you think they have what it takes to take first place?

Meruna: I am an unfortunate member of the Team Secret bandwagon – Puppey all the way! I mainly follow teams whose players I like – sadly NiP, Tinker nor Na’Vi managed to qualify. Since Secret is on a roll these days, winning the Red Bull tournament and The Summit 3, I hope they can keep up their great shape and also take ESL One.

ESL: Thank you for your time and have a great event! Any shoutouts you would like to make?

Meruna: I would like to shoutout to my boyfriend for being so patient with me and my crazy hobby!

If you want to join Meruna and take a shot at the cosplay competition, there is still time to sign up!

Sign up for the ESL One Frankfurt cosplay competition here!

Want to be part of the biggest Dota 2 event in Europe featuring the world’s best teams? Be sure to secure your ticket and experience the best competitive Dota 2 has to offer now!