After entering the second half of EPL in week 4, only one thing is certain – the race for a playoff spot in season 6 will once again be incredibly tense in both regions.

In Europe the trio consisting of Fnatic, North and FaZe looks primed to make it to Denmark by the end of the campaign. The rest of the field is separated only by margins, with a prominent team lagging far behind.

In the Americas it’s OpTic, Misfits, Liquid and SK who seem destined to make it to the LAN finals after a hard-fought week. But nothing is set in stone yet and in NA too, matters will only intensify from here on out.

Check out all the action and highlights week 4 brought to our screens.

Fnatic now leads the league for a third consecutive week after a mediocre showing, winning two maps versus mouz before getting 2-0’d by GODSENT.

Right behind the Swedes follows another Viking team, North. Bringing in Valde for Magisk begins to pay huge dividends for North.

The Ninjas in Pyjamas had the toughest schedule in the past week, with matches against FaZe and G2, but came out on top on both maps versus the French, and went 1-1 versus Karrigan’s boys. The Ninjas leaped from rank 10 to 6, right there on the edge of qualifying for the playoffs.

BIG, our team from MDL, and LDLC are ranked fifth and seventh respectively. Both, but especially LDLC had a rough start into the season, which makes it even more surprising to see them doing so well now.

At the bottom of the table we find EnVyUs, mousesports and Na’Vi. It is safe to assume we won’t be seeing any of them in Odense by the end of the season.

Take a look at the full table of EPL’s sixth season after week 4! 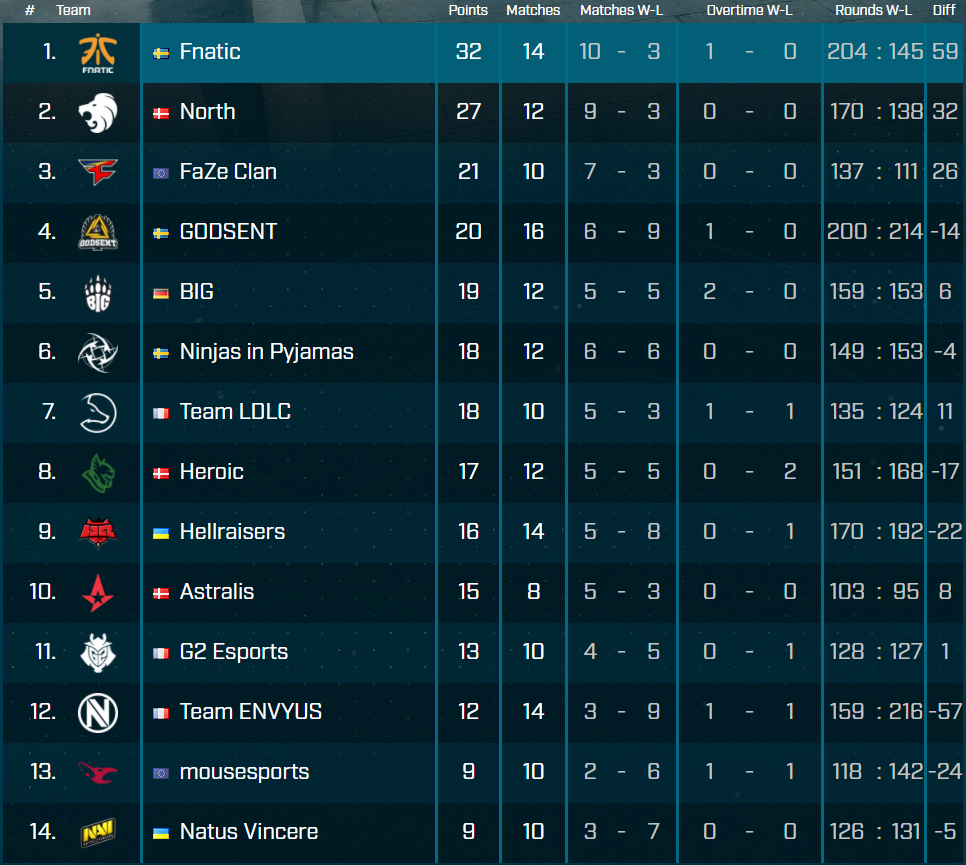 Well, unfortunately the match of the week didn’t live up to its full potential. It could have been a clash between two squads of equal skill. Instead, we witnessed a wipe out, as Fnatic dispatched of mouz with ease.

First up was de_train. The Swedes started out as CT and completely shut down mouz’ offensive efforts, taking the first half 14-1. Closing out the match was mere formality after JW’s boys won the T-side pistol as well. Final score, 16-1 in favour of Fnatic.

The squads then moved on to de_cache, where once again the map was decided in the first half. The Swedes dominated on the offense first, garnering 12 rounds on the T-side. mouz, and especially STYKO, did fight back after they switched sides, but the deficit was too big to overcome in the end, as flusha & Co. take de_cache 16-10.

In addition to the loss against Fnatic, mouz had to concede defeat versus North (12-16 cbble, 14-16 mirage) which leaves them ranked second to last (2W-6L-1OTW-1OTL). The name of the game for the German based squad isn’t making it to the finals anymore, it is avoiding relegation.

On the other hand, Fnatic continues to impress. The implementation of LekrO and Golden went smooth. The team play looks incredible early on and I can’t wait to see the squad compete on LAN. If Fnatic don’t completely collapse, the latest we will see them play offline, will be at the finals in Odense.

Once again it seems like a non US team is hijacking the prime spot in NA. Past season it was Brazil, now Europe, as OpTic gaming wins 3 out of 4 played maps in week 4, putting them back on top of the table.

Talking about SK, they sit in fifth after winning seven out of 10 maps, tying them with Team Liquid in sixth place due to a slightly worse rounds-won differential.

Misfits, NRG and Renegades surprisingly occupy ranks two through four. It is refreshing to see new faces in the upper half of the standings, especially when these new faces deserve where they are simply through stellar play.

Cloud9 have turned around their terrible start into the season by winning 5 maps in a row and now sitting in 8th position. I’m positive they’ll keep improving under tarik’s leadership, who’s turning out to be quite the IGL, and we’ll see them in Odense by the end of the season.

At the bottom of the table we find Ghost Gaming who are a little out of their depth in EPL with a record of 1W-13L.

Check out the full table of EPL’s sixth season after week4! 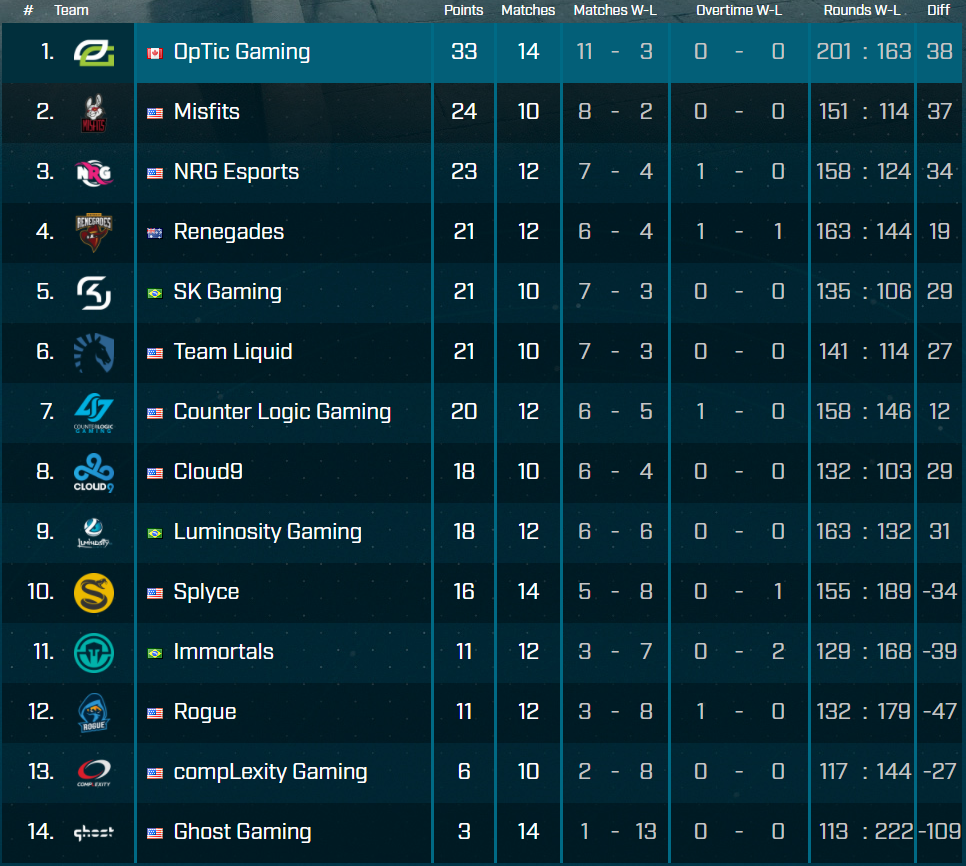 First up was de_cache, where Renegades scored a comfortable victory. Starting out on the offense, the Australian-North American mix ended the first half with a score of 7-8, which isn’t so great on this nowadays predominantly T-sided map.

But Renegades put together a flawless CT-side, completely shutting down OpTics offense. Lead by Nifty, jks and AZR, the Aussies didn’t give up a single round and closed out the match 16-8.

Although @OpTicGaming started strong @renegades brought it back!

Next, the players gathered on de_train, and it was a lot closer this time around. OpTic began on the T-side and won a close half with 8 rounds to 7.

After the switch, it went back and forth and all the way down the wire to the 30th round. Check out the last round of the match, as OpTic closes it out 16-14.

In round 30 @OpTicGaming finally close out 16-14 over @Renegades and go 1-1 for the evening #ESLProLeague pic.twitter.com/MjTk7gH0x6

Twistzz is so good

ELiGE was hungry for some BBQ

Again ELiGE with the 1v3 pistol round clutch

Missed the show? Here are the highlights!

We’ll be back tomorrow with the second super week of the season!

Week five brings us the second super week of the season with a myriad of matches in Europe from Tuesday through Sunday and in NA from Wednesday through Monday. Kicking off the action tomorrow at 19 CEST will be a French derby between G2 and EnVy Us. Be sure to check in, and find the full schedule here.