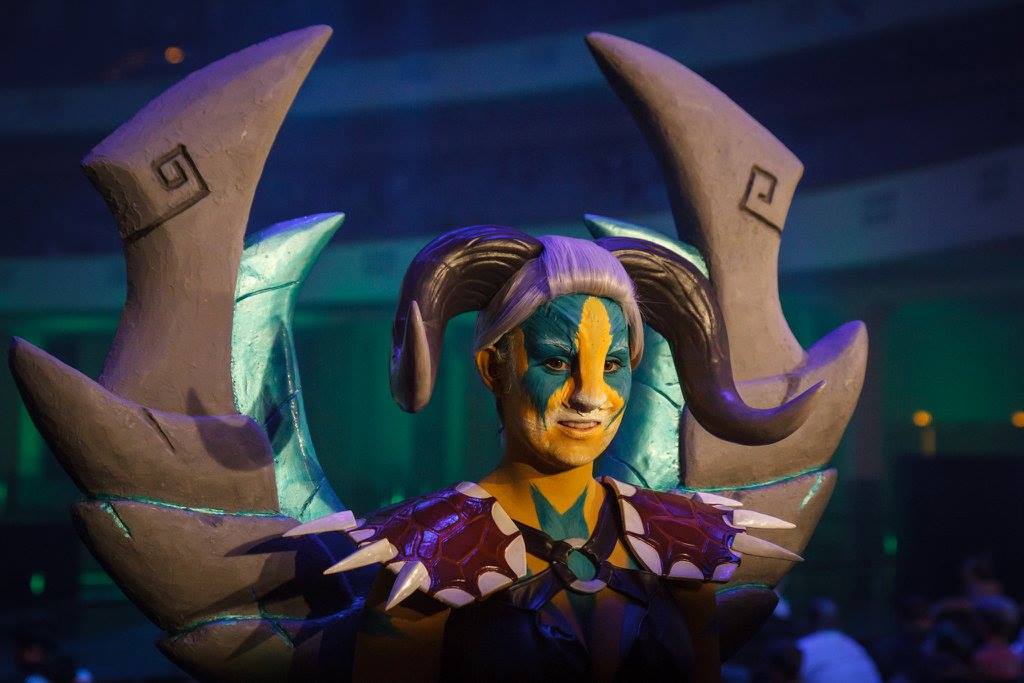 ESL One Frankfurt has always been a great event for cosplayers, who are more than welcome to come and showcase their crafting skills and enrich events with their talent. This year’s installment will be no different, with ESL One Frankfurt 2016 to feature another cosplay competition. Today, we chat to Rehab Cosplay, who attended the Frankfurt Major as well as ESL One Frankfurt 2015 and is returning again this year.

ESL: Hi there Rehab, and thanks for taking the time to talk to us! Firstly, tell us how your adventure with cosplay began.
Rehab: I have always enjoyed crafting and dressing up. Once I got hooked on Dota, cosplaying pretty much suggested itself.

ESL: What is your favorite thing about cosplaying?
Rehab: I enjoy the crafting process from nothing to concept to a full costume.

ESL: Cosplay can be a time and money-consuming hobby – what are the biggest difficulties and how do you overcome them?
Rehab: That is very true. I try to spread the costs for a costume over as much time as possible. After every event I tell myself that I should stop spending money on cosplays but I just love it too much…

ESL: When did you first get into Dota 2 and what was it that drew you into the game?
Rehab: My brother persuaded me to watch TI4 with him. I didn’t really know what was going on in the games and I remember being very annoyed about it. Over the next couple of days I watched the newbie stream by myself, trying to understand the game. By the end of the tournament I was completely hooked. It’s probably the complexity of the game that I enjoy the most.

ESL: Do you follow the competitive scene? Which team or players are your favorites and why?
Rehab: My favorite team is Alliance. I’m not ashamed to say rat Doto best Doto. My favorite players are Universe and Admiral Bulldog – offlaners ftw!

ESL: Last year, you attended ESL One Frankfurt as Drow Ranger and the Frankfurt Major as Elder Titan – tell us a little about those costumes.
Rehab: Drow was the very first costume I made. It took a looong time and I made a lot of rookie mistakes. Elder Titan is probably my favorite of my three Dota cosplays so far, but it was made in a huge rush. By now I’ve improved a couple of things I wasn’t happy with and added a weapon, which I couldn’t afford at the time.

ESL: How did you enjoy ESL One Frankfurt 2015 itself? What are your fondest memories?
Rehab: Because of the rookie mistakes, I had a lot of trouble with my costume. To be honest I was pretty stressed out most of the time but my fondest memory is probably how happy my sister was when she placed fourth with her Enchantress cosplay.

ESL: Tell us about the cosplay you’re preparing for this year’s event.
Rehab: For ESL One Frankfurt 2016 I’m working on a Necrophos cosplay. It’s going to be the Wrath of Ka set.

ESL: Which parts are proving the most difficult to make?
Rehab: I’m not particularly good at sewing, which is a bit of a problem in the case of Necro. But I’m managing alright, I think 🙂 The next big issue to face is the illuminated part of the wings that Necro has in the set I chose to make.

ESL: What is your decision-making process when it comes to choosing who to cosplay?
Rehab: I have a list of heroes/sets which I would like to cosplay just because I like their design. When I decide what to do next I try to choose one from the list that isn’t too similar to the previous costume from a crafting point of view because I don’t want to get bored. Other important factors are transportation of the costume to an event and how much help I need/have to put it on. And then, of course… costs.

ESL: What are you looking forward to the most at ESL One Frankfurt 2016?
Rehab: It has to be wearing my new costume. One of the biggest downsides of cosplaying is that it makes it a little difficult to follow the games at an event. I’m so occupied with my cosplay, hoping that nothing breaks, taking pictures, etc. that I find it hard to focus on anything else. I watch replays of all games afterwards.

ESL: Thanks for the chat and see you at the event! The last words are yours – are there any shoutouts you’d like to make?
Rehab: Shoutout to Tom/”Metabie” for making cosplayers’ lives easier at ESL events!

Join the fun in Frankfurt!

ESL One Frankfurt 2016 kicks off at the Commerzbank Arena on June the 18th – join us live on the spot to celebrate everything Dota 2!