“I probably used in the ballpark of 1,500 to 1,800 balloons”: an interview with ESL One Frankfurt 2015 balloon twister Daniel “FuDD” Ravia

We interviewed official ESL One Frankfurt balloon twister Daniel “FuDD” Ravia a couple of months ago in the leadup to the event. Now, with his first major esports event under his belt, we sat down with him again to chat about how he found it, what his favorite moments were and where he’ll be going from here.

ESL: Hi again, Daniel! For those readers who didn’t catch your last interview with ESL, can you introduce yourself and tell us a little about what you do?
Daniel “FuDD” Ravia: As a balloon artist, there are many things that you do or can do. Birthdays, festivals, fairs, mitzvahs, weddings – really any event can be improved with balloons. As far as behind-the-scenes stuff goes: ordering, organizing and inventorying balloons, keeping up with insurance, taxes, non-balloon but balloon-related expenses, scheduling parties and events, etcetera… 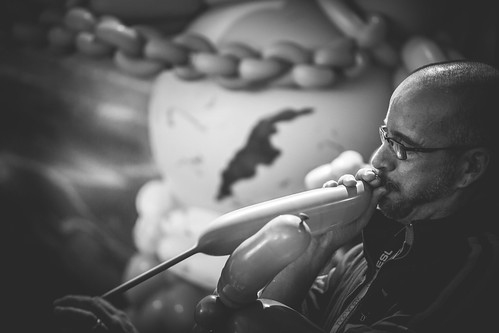 ESL: What was it like being at the Commerzbank Arena?
Daniel: Being at the arena was amazing! Just the fact that I was able to be around gamers was something I’ve missed (as my convention/event money these days goes towards my ongoing balloon education and networking rather than attending gaming events like I used to)

ESL: What was your favorite non-balloon-related moment from the event?
Daniel: Favorite non balloon thing… it’s so hard to choose one! I think a huge one at any gaming or balloon event is getting to meet people who you know online but have never interacted with in person. Getting to meet James, Tom, Stuart, Hot_Bid, Nazgul and many others from Tl and online was a wonderful experience! 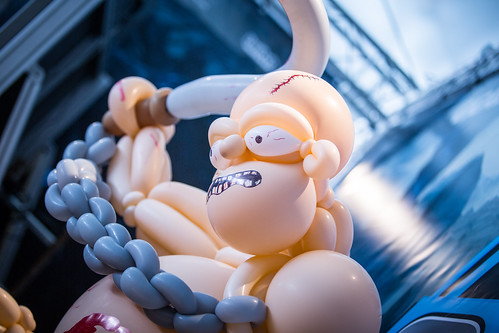 ESL: Did you end up siding for a particular team over the weekend?
Daniel: I did. Having so many Secret fans in the house, it was hard not to cheer for them. Having not played the game or much knowledge about the teams and their playstyles, it was easy to be swept up with the crowd! I do hope to get some games in as soon as I’m home and able to sit at my computer again!

ESL: Tell us a bit about the big pre-prepared Dota 2 balloon sculpture pieces you took to the event. Were they difficult to make/transport/keep intact?
Daniel: The pre-built heroes were a lot of fun. I was able to get three of the heroes (two heroes and one creep, I found out later :() mostly done prior to heading over to the Commerzbank Arena on Friday, where I went and built the other three heroes. Transferring the three from the hotel was not too hard – they just took up all the space in the cab, haha. There were some details that needed finishing on the morning of the first day, but everything, I felt, went rather smoothly on my end, and all six were ready to go at start time. 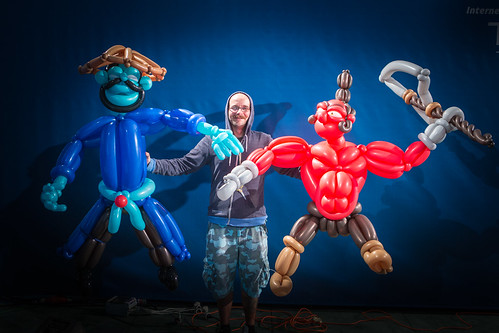 ESL: What was it like interacting with the fans at the event?
Daniel: Interacting with the fans was great! I was overwhelmed by all the love I received from everyone who came to get a balloon – they really kept me energized and excited to make them the best balloons I could. I even got a few presents and some homemade cookies from some fans of my work! In a word: overwhelming (in all the good ways)!

ESL: Which was your favorite balloon sculpture request from the event?
Daniel: Favorite request… If I have to say, it’s a toss up. I really enjoyed how the Crystal Maiden turned out, but I also loved how I was able to evolve the Faceless Rex. Rex, because I made him more than any others and I was able to improve him each time, creating a tighter and better-looking balloon sculpture.

ESL: What about the strangest?
Daniel: Strangest… they all were, haha. The strangest was probably being asked for some normal balloons. Kirby, Minions, a penguin, a heart… The strangest-looking was probably a courier – Drodo the Druffin, I think is its name is. Looks like an alligator and a penguin had a lovechild and it has a fish in its mouth.

ESL: How many sculptures do you think you made over the course of the weekend (and how many balloons do you reckon you used in the process?)?
Daniel: I believe (not counting pre-built stuff) I worked for about 23 hours those two days, and spent about 15 minutes on each balloon on average. I think I made somewhere around 92 to 110 (as I did do a few ‘normal’ balloons, which take a lot less time). Again not including the big pre-built balloons, I probably used in the ballpark of 1,500 to 1,800 balloons. 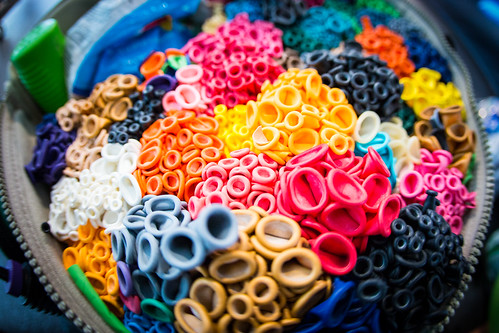 ESL: Can you see yourself balloon twisting at another big esports event?
Daniel: I would love, love, love to be involved in esports more. I also think it would be great to have one or two more people of similar skill with mel to get more balloons to the people!

ESL: Thanks for chatting with us again, Daniel! Are there shoutouts you’d like to make?
Daniel: Thank you! I feel so blessed, honored and humbled by the event, and I would like to give a shoutout to James “Kennigit” Lampkin for taking a chance and putting my name out there, to Tom and Stuart for helping me find my way at the event and for their words of encouragement, Nazgul for coming to say hi and creating my homepage at TeamLiquid (to get a Dota team going again!), Hot_Bid for being, well, Hot_Bid, and to all the people working behind the scenes to make this event possible for us crazy gamers! And surely not least, even though I’ve named them last, ESL for taking a chance on me, bringing me out and letting me bring a bit of my balloon world to a world I love just as much – the gaming world!

ESL: Thanks so much for taking the time to speak with us again, Daniel – here’s hoping to see you at another ESL event soon!