“I didn’t really care if we played Cloud9 or Fnatic because I know we can beat both teams”: interviewing Team SoloMid’s Peter “dupreeh” Rasmussen 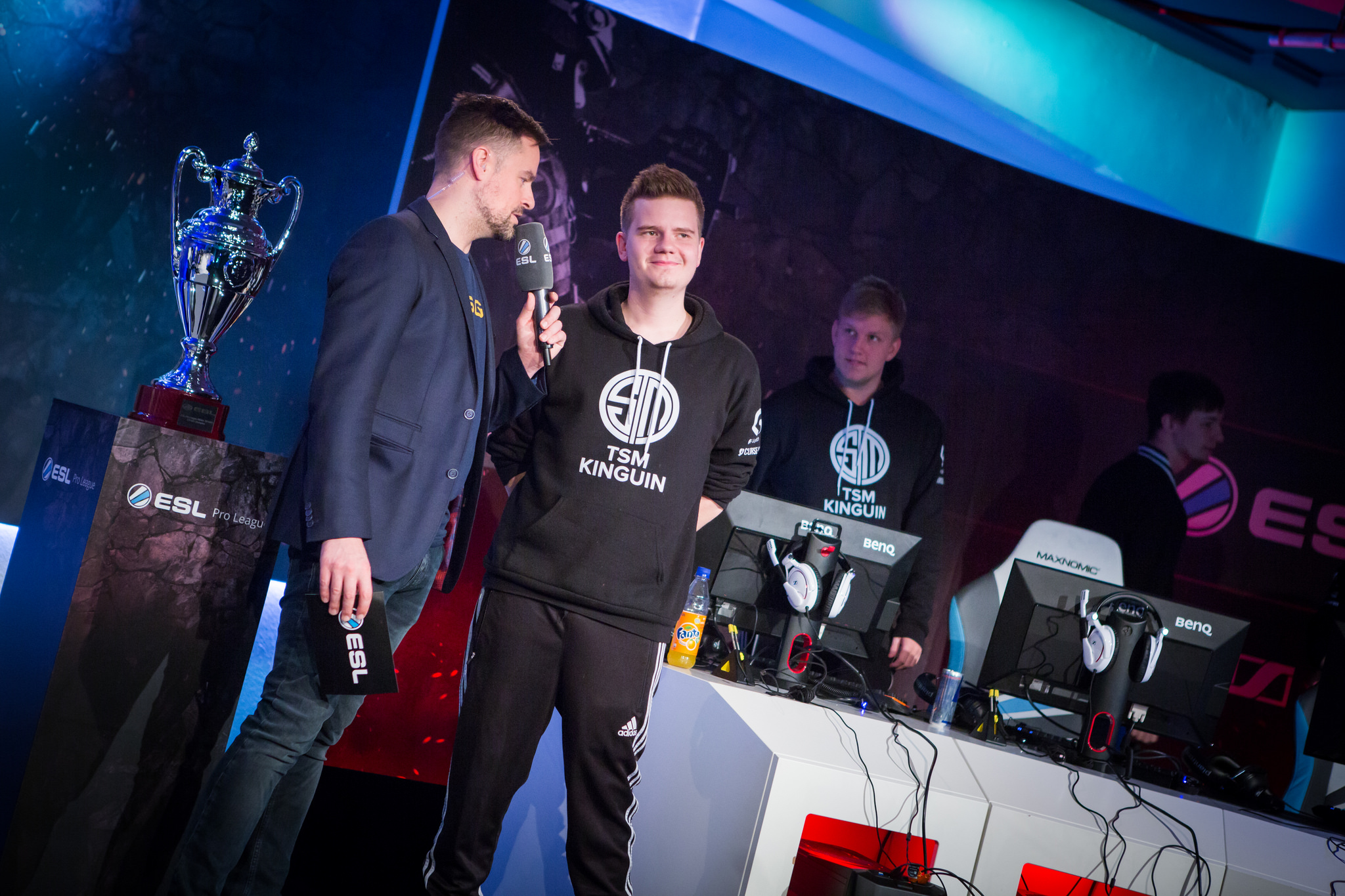 ESL One Cologne 2015 will be the biggest CS:GO event in the world as well as the next Valve major, where sixteen of the world’s best teams will gather at LANXESS Arena to battle it out for cash and glory. Eight out of the sixteen teams are Legends who proved themselves at the last major and received a direct invitation.

One of these is the Danish Team SoloMid, who despite being a fairly young team already have an impressive portfolio of tournament wins. We chatted to Peter “dupreeh” Rasmussen about the team’s recent performance, their synergy and ESL One Cologne.

ESL: Hi there! Let’s begin with your amazing performance at DreamHack Valencia. How did it feel to win?
Peter “dupreeh” Rasmussen: Greetings, traveler! We won so obviously it was amazing! Winning is always our goal, but apart from winning DreamHack Valencia it was amazing to take down all the other top teams throughout the tournament. That we managed to pull ourselves together after a 0-1 deficit against Na’Vi in the semifinal and totally overcome them in second and third map felt great. Most important, though, is the fact that we managed to come back from a very disappointing tournament just a few weeks earlier at the ESL ESEA Pro League finals in Cologne and win DreamHack Valencia/FACEIT Stage 2.

ESL: You faced Cloud9 in the finals, who seem to be in great shape lately. Having not played them in a tournament before, what were your expectations coming into the matchup?
dupreeh: We’ve never really had problems with North American teams – I think we’ve lost one time in total throughout the years I’ve played with Fetish and this team. It’s indeed been different lineups, but in general we have a good idea of how they play. The new Cloud9 lineup with Freakazoid and Skadoodle seems to work really well for them as they’ve now proven themselves a lot by getting into multiple LAN finals against European teams. I didn’t really care if we played Cloud9 or Fnatic because I know we can beat both teams. Playing against Fnatic is always fun with exciting matches, and we’ve played each other a lot lately. Going into the Cloud9 match was somewhat different. We’ve all seen how they performed so we surely showed them a lot of respect but not enough to let them do whatever they wanted. We were prepared for their game style and our work paid off in the end when we took home the trophy.

ESL: You’re still a relatively young team but have already secured several first places at various tournaments. What do you think made you synergize so well so fast?
dupreeh: The first thing that comes into my mind is how well we work together outside of game. We’ve got some different personalities but they all seem to match up pretty well. We’re always having fun when we travel so our chemistry is just perfect. It’s always been like that, and also with Fetish. However, the guy that made the difference was Karrigan. When we brought Karrigan into the team, our intention wasn’t to bring in someone with insane individual skills but a person with a lot of experience, a guy who was dedicated enough to work out ideas and strategies on his own, a guy who could help us improve tactics-wise but most importantly someone that would kick our communication up a few notches.
Communication has always been a problem within the team, but I believe bringing in Karrigan has helped a lot. Karrigan does a lot for the team so he’s the one to thank in the long run, together with the rest of the guys in my team who step up their individual performances when it’s needed. When we won the PGL CCS a few months ago ,we cracked the choke-nut and that was the start of something we never thought we would achieve.

ESL: With ESL One Cologne, the next Valve major, you are going to be competing with a very strong lineup of teams. How are you preparing?
dupreeh: I guess we’ll skip practice just because we can, because that’s how our preparations were coming into DreamHack Valencia/the FACEIT Stage 2 finals. Nah, jokes aside we’ll prepare a lot more in every possible way this time. We got the pattern set. We’re going to practice harder than ever before. We will be bootcamping prior to the major and that’s as much as I’m going to go into details regarding this matter. The rest we’ll save for the major 🙂

ESL: With your fantastic performance at DreamHack, you are one of the top candidates to take the next ESL One championship. How do you deal with such pressure?
dupreeh: We’re currently ranked as the second best team in the world (by most people and ‘experts’) so I guess we’ve got expectations to go into the finals this time. We’ve been in two semifinals, so I hope this time we’ll go to a final. Playing in front of hundreds of thousands of people doesn’t really affect us any more so I guess we’ll just try to keep it cool and focus all the way. Getting through the group stage is the most nerve-wracking thing. honestly – best-of-ones and a possible hard group can go either way. Going into best-of-threes, I think we stand a good chance against most, if not all, teams.

ESL: Have you been following the ESL One Cologne qualifiers? Which teams have stood out to you the most in terms of performance?
dupreeh: I did follow it briefly. I was surprised that Dignitas was eliminated as they lost in overtime to Flipsid3. I did not see that coming, especially with Dignitas’s huge lead. Another team that impressed me was eBettle as they took out Titan, though it was a close match. However, Titan dominated LGB in the last chance qualifier, so they also secured themselves a spot.

ESL: Do you think we’re likely to see upsets caused by the qualified Challenger teams?
dupreeh: The team with the biggest potential by far is Titan. Despite their roster change, I am convinced they will work their asses off to do well in Cologne – I know Ex6TeNz is going to work day and night. However, a team like eBettle could also surprise. We barely know how they play, and that can give them a great advantage. Underestimating a team like them can be devastating. Flipsid3 could do it too, but they’ve been around for a good amount of time so I guess every team has a clue how to handle them. They still have some great individual players, though, so I wouldn’t count them out either. With best-of-one group stages, every team can make an upset.

ESL: What are your expectations for ESL One Cologne?
dupreeh: Winning. Quite simple.

ESL: Thank you for your time and good luck in Cologne! Do you have any shoutouts you’d like to make?
dupreeh: Huge shoutout to Team SoloMid and all of our sponsors – without them, this wouldn’t be possible. Shoutout to our manager Frederik “realition” Byskov for helping us out daily and making things easier for us. Big shoutout to all of our fans and supports – you guys are the real champs here! Much love! Catch you guys in Cologne 🙂

Join dupreeh and the others in Cologne!

Don’t miss out on your chance to be a part of the biggest CS:GO event the world has ever seen and join us at the LANXESS Arena in Cologne, Germany, on August the 22nd and 23rd.

Get your ticket for ESL One Cologne here!

If you’re unable to make it in person, you also have the one-of-a-kind opportunity to watch the finals live at your local movie theater on August the 23rd, when the Esports in Cinemas project will be bringing the final games of ESL One to big screens around the world.