“I always remember the first event that I did for every major game”: an interview with djWHEAT 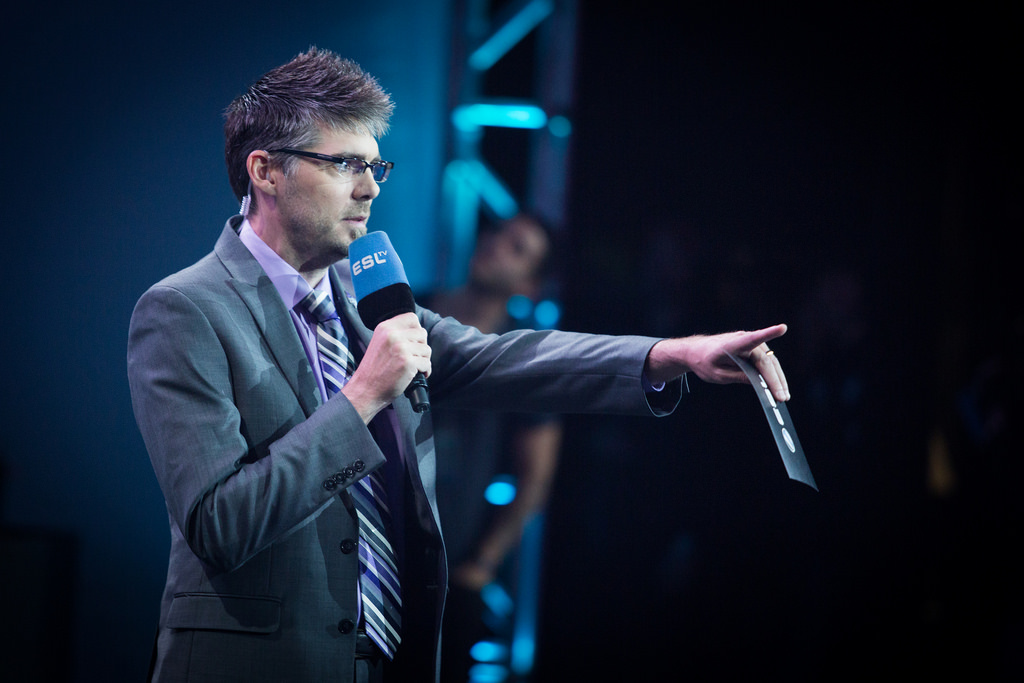 Following Marcus “djWHEAT” Graham’s first live Dota 2 event at ESL One New York, we chatted with the long time host and commentator about his experiences with the Dota 2 scene as well as the players and talent at Madison Square Garden.

ESL: Firstly, thanks for taking the time to speak with us! You have gameplay videos of yourself delving into Dota 2 on YouTube. Did you feel suitably prepared for an event in an esports scene which hasn’t been the primary focus of your career so far?
djWHEAT: I think at this point in my career, it’s safe to say that I never truly feel prepared for an event. There is always more information you could know about the game, teams, players, their previous history, team rosters, etc. While I always try to be as prepared as possible, it is my firm belief that a caster/host’s job is never ‘perfected’ and constant education and practice is required to maintain a presentable level that fans will appreciate. So while I did feel prepared to walk on stage as host at ESL One, I have so much to improve on when it comes to Dota.

ESL: You have been playing Dota 2 for almost a year now. Were any of your favorite heroes picked during the tournament? Were you looking forward to any specific matchups?
djWHEAT: My favorite heroes are (in no particular order except number one) Puck (I love Puck!), Magnus, Kunkka, Lion, Rubick, Skywrath Mage, Witch Doctor and Dazzle. Basically I like to play mids and supports. There were a few games that featured some of my favorites heroes, and I must admit those are my favorite games. I can learn ten new things in a game watching professionals take the reins of my favorite heroes, and I love that about Dota. I was really looking forward to the finals series between VG and EG. I think the storylines leading up to this match up were top notch and just about everyone was excited for those two teams to meet. I was also very interested in Team Secret considering this was their ‘first’ LAN event, despite the amount of experience the individual players had at LANs. 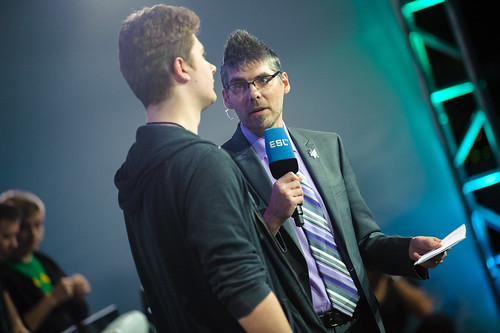 ESL: Did you meet all the other personalities before the event or was this the first time seeing them in person? Who were you looking forward to working with the most?
djWHEAT: Aside from ReDeYe (who I’ve worked with previously over the past ten years), most of the talent I was meeting for the first time. It was actually pretty awesome because I’ve been watching Dota 2 for quite some time now, and I feel like I’ve watched hundreds of hours of all of them. That was a pretty unique situation for me, because over the past four years I’ve been casting with the same broadcasters pretty consistently. I felt honored to be a part of that group, even though they had much more difficult jobs than I did! I was looking forward to working alongside all of the talent on a production. I was probably most looking forward to meeting and spending some time with Jacob (Maelk) because many years ago we exchanged words online and it was fitting because what we were arguing about had come full circle. Either way, it was a fantastic experience, and I don’t think those guys even realized how excited I was to be working at ESL One!

ESL: Among all the interview, casting and hosting talent at ESL One New York, where would you rank yourself when in comes to in-game skill?
djWHEAT: Trick question! I think I am about two levels above ‘SUCK’ in Dota 2, and I’m pretty sure that everyone else working ESL has like 9k MMR (at least that’s what they all claim!) so I think I’m way down the ladder in terms of skill. Many of these folks were very avid Dota players, and they have years of knowledge that I will likely never be able to catch up to. That won’t stop me from playing and having a great time, though! As long as I don’t feed and can make a difference for the team, I will feel as if I have done my job! 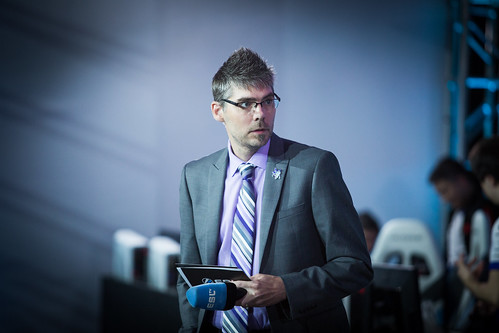 ESL: Were you nervous before the event? Did you have any particular worries?
djWHEAT: There is always a little bit of nervousness before an event, but this is mostly due to the fact that I just care about esports and what we do. Every person on that production has a specific role, and together comes an amazing show. My worries are mostly that I do what the director and producer need me to do in order to make the whole thing come together. Thanks to the entire production, I think it was a great event, and they handled all of the curveballs as best as they could.

ESL: How do you prepare for onstage interviews with the likes of iceiceice, ixmike88, etc?
djWHEAT: Haha! You do your best. Honestly the best way is to watch some of the other interviews that have been done by other outlets, and you ask the other talent (who have interviewed them before) what a best approach might be. Interviewing was my favorite part of ESL One, and iceiceice definitely gave me a run for my money! Sometimes just spending a little time with the players is a great way to know the best way to conduct an interview. 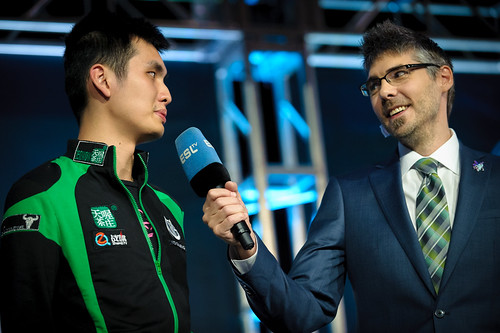 ESL: You seemed to have easily taken even unorthodox interview answers in your stride onstage. Do you have any tips for aspiring hosts?
djWHEAT: I’ve been gaming for nearly 30 years and one of the reasons is that I have a competitive fire that burns within. The other reason… is because gaming is fun. I have a huge amount of respect for players who take this philosophy (even if it’s second to winning and being #1) because there’s no reason why we can’t have fun while hundreds of thousands of dollars are on the line. So loosen up a bit, practice, and remember that having fun isn’t outlawed. A good host knows when to let the interviewee have fun and when to approach an interview serious and focused.

ESL: Can you share an interesting backstage story with us?
djWHEAT: Actually there are about 20 that you can’t publish, but one of my favorites was talking to a security guard who had a son who was on an LCS Challenger team trying to make it into the LCS. He said that he had heard of Dota 2 before, but he didn’t have a chance to watch it much. After talking with him a little bit longer, he finally asked me: “Any of these chaps stream on Twitch?” This fifty-something security guard surprised me, but left me feeling pretty good that competitive gaming is growing in terms of size and awareness. 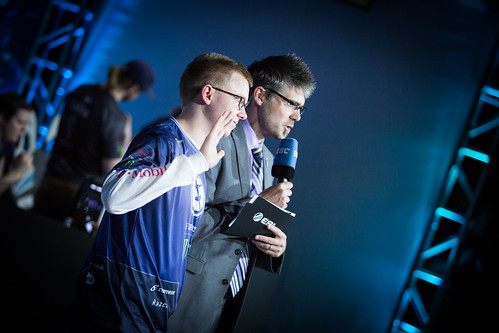 ESL: How did you find the atmosphere at the venue and the NYC crowd?
djWHEAT: It was great. I only got a chance to watch one game from the crowd, but being out there was pretty great. The fans of each team were battling in support with noise across the entire theater. I couldn’t help but think that it would be nice to see more Dota 2 in the US.

ESL: What was the most memorable moment during the event for you?
djWHEAT: Honestly, what’s most memorable for me about this event is that it was the first Dota 2 production I’ve been able to participate in. I know that might sound odd, but I have been involved in esports for almost 15 years and I always remember the first event that I did for every major game I was a part of covering. So thank you to ESL and ESL One for bringing me on as host! 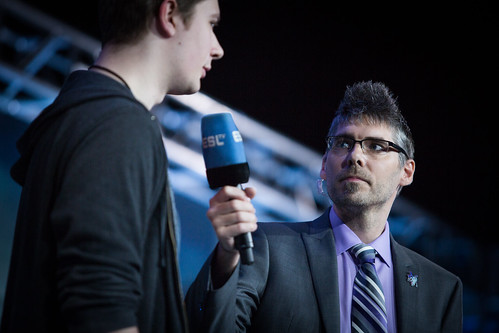 ESL: Will we be seeing more of you at future Dota 2 events?
djWHEAT: Absolutely! I really enjoyed getting a chance to hang out with the players, casters/hosts and production folks at ESL. The Dota 2 coverage group was incredibly welcoming and always willing to help. I took advantage of the fact that I was surrounded by an enormous amount of talent and knowledge and that was great. Dota 2 is one of my most actively watched esports right now and I hope I can continue to be involved going forward.

ESL: Thank you for taking the time to talk with us, Marcus!

You can keep in touch with djWHEAT on his Twitter @djWHEAT.

Don’t forget to read up on what other ESL One players and talent had to say: