How eSports is shaping the gaming industry 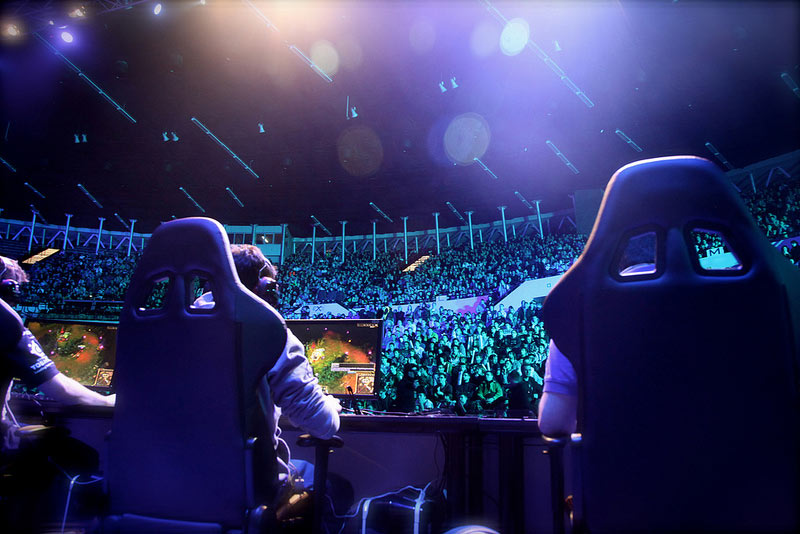 Surprisingly, Hollywood is not responsible for the biggest media launches this year. With first day sales of US$800 million and US$500 million, it is the gaming industry, specifically Grand Theft Auto V and Call of Duty: Black Ops 2 (respectively), that is constantly gaining ground. Yet, moving even faster than the gaming industry as a whole, is the eSports movement contained within.

The past decade has seen an exponential increase in eSports players, spectators and investors. What started out with LAN parties handing out bragging rights to the winners has ended up taking center stage at sold-out arenas packed with thousands of people who watch millions of dollars ceremoniously handed over to fully professional computer game players. – Prize money that is forever on the increase: in the past five years, competitive gaming prize money has grown by over 800%, closing in on US$17 million in 2013.

How did we get here and what does the future hold?

Technologically, early gaming industry superstars, such as Tekken and Street Fighter, were held back by the simple fact that it was impossible to play against people who were not in the same room as you. It wasn’t until the release of StarCraft (and WarCraft III: Reign of Chaos a few years later) that this changed. The new games included the ability to play against others online through a system of ranked competitive ladders that urged users to hone their skills in order to climb to the top. The higher you up you were in the standings the more bragging rights you had within that game’s scene. One country in particular nurtured this addition and the top-tier gaming scene grew to be much more serious. In the late 90s, Korea saw its first large prize money tournaments in StarCraft, including sponsorship and broadcasting from the Korean TV channel OnGameNet.

Although largely limited to Asia for the next couple of years, the first Korean eSports broadcasts were an important step towards realising the eSports spectacles we see today on a global level. A mere ten years after the first broadcast matches, we find ourselves in the midst of spectator eSports becoming mainstream. This is largely thanks to online streaming platforms such as Twitch.tv, who are responsible for streaming many of the 696 professional tournaments that took place in 2012 alone (an increase of almost 700% in just 12 years).

The most interesting element of the eSports movement is the incredible growth in viewer numbers. Over the past few years ESL has reported exponential growth in viewing sessions for Twitch broadcasts of competitive leagues. A modest 5.4 million viewer sessions in 2009 has steadily increased to boast an impressive 81.3 million in 2013 with no signs of slowing down. There is no reason to believe that this will plateau when it reaches the limit defined by the gaming industry niche: 8.2 million people tuned in for the League of Legends Season 2 Championships with 1.1 million concurrent views. Within eSports that’s a record-breaking figure, but these numbers rival (or in some cases even trump) the viewer numbers of many classic sports events such as the UFC, Winter Xtreme Games and Major League Soccer.
League of Legends is a game that is not just leading in monthly users (32 million active), viewer numbers and eSports prize money, it’s also constantly pushing the boundaries when it comes to making eSports a mainstream spectacle. MOBAs (Multiplayer Online Battle Arena, e.g. League of Legends and Dota 2) have fast become the most popular online game genre, with newcomers looking to capitalise on the headway Riot Games and Valve have made with their frontrunners. The Season 3 World Finals for League of Legends took place in Staples Center (USA), home to LA Lakers, this year with a seating capacity of over 10,000. The event’s success earned Riot Games its newest sponsor, Coca Cola, who announced they would be sponsoring League of Legends’ upcoming Challenger League.

This is symbolic of the validation of eSports by conventional media and communities around the world. The gaming industry, reported to have made a total of US$70.4Bn this year, of which US$21.1Bn can be attributed to the PC / MMO market, shows no sign of slowing down. Publishers such as Activision Blizzard, Valve and EA actively develop games with eSports in mind. For the recently released Battlefield 4, EA employed an entire team of people to manage eSports specifically. The same is true for countless other games that enter the gaming market today, which is exciting news for all those involved in the scene: we are and will most likely continue to get content designed and tailored specifically towards competitive play. The future certainly looks bright for eSports.

If you want to read more on the growth of competitive gaming and the gaming market in general, we have recently collaborated with NewZoo on a Gaming Trend Report.