GeT_RiGhT: “People see that CS:GO has a bright future!” 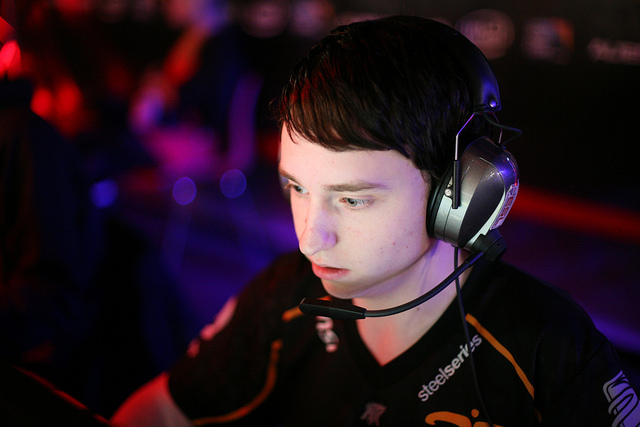 The EMS One Katowice Finals with its US$250,000 prize pot is drawing closer and closer. We sat down with Ninjas in Pyjamas’ star player, Christopher ‘GeT_RiGhT’ Alesund, to talk about his team, EMS One Katowice and the qualification. See what HLTV’s #1 MVP of 2013 has to say on facing Fnatic once again!

ESL: Hello Christopher, thank you for your time. How are the preparations for the 2014 tournament season going for you and your team?

Christopher ‘GeT_RiGhT‘ Alesund: Hey hey, thanks for having me! The preparations for 2014 are going ‘okay-ish’ at the moment. We’re not quite at 100% yet because we haven’t properly started training, mainly because people are moving (etc.) at the moment. But as soon as they are done, we will work on improving our game.

ESL: Fifflaren took over the job of Ingame Leader. How did you decide on making this switch and how well do you think it’s gone in the matches so far?

GeT_RiGhT: We had a discussion about a couple of things and I said to my teammates that I didn’t want to be ingame leader anymore. – There were many reasons, but mostly because I just don’t think I have the time that’s needed for the role. Maybe this will change later … maybe not. We will see! But returning to Fifflaren as ingame leader, again. It’s a good thing. I do like his view on things and we have also told him to be a bit more relaxed than before. But for the moment it’s just all good!

ESL: You just received the honor of being named HLTV’s community-voted Player of the Year 2013. How do you feel receiving this kind of award?

GeT_RiGhT: When I found out, I was really happy to get something like this. I’ve ended up in second place two times before. So, it was great to finally win first place! Winning the award proved to me that, even after all the health problems I had throughout the year, I could still play CS on a high level. So this is a big achievement for me! GeT_RiGhT having fun (More photos of IEM Katowice on Flickr.com)

ESL: DHW was the last tournament where the top teams met. Will we see some changes to the play styles we saw in 2013?

GeT_RiGhT: We’ll see! Nothing I can go out and say at this moment 😉

ESL: Overall we saw a lot different teams winning the tournaments lately. What do you think is the reason for this?

GeT_RiGhT: I think the reason is mostly because people now see that CS:GO has a bright future. I think the same! So people are starting to ask themselves, “should I go PRO or not?” and if they reply with “yes!” to this question, then they really do get 100% into it, making the competition even harder, which is great for the scene.

ESL: In less than two months, all eyes will be drawn to Katowice and the $250,000 CS:GO tournament. What are you expecting when you think about having to play in front of a very pumped crowd in the Spodek Arena?

GeT_RiGhT: Will it top what we saw at IEM Katowice 2013? I hope it can be even BIGGER than the last time IEM was there. Especially now that the audience can actually see some CS 😉 Nothing against the other games: I do love to watch them and play them as well, but I think the event was missing an FPS game and I hope the ESL crew believes it was the right move to add in CS:GO into the IEM World Championship.

ESL: Let’s take a look at the qualifiers. We are more than half way through and only a few cups are left before the regional finals. Was there any big shake up that you did not expect?

GeT_RiGhT: To be honest, I haven’t followed them as much I wanted. But looking at it now, I think the Norwegian teams have been improving a lot and they are looking strong in the qualifiers. But the rest, I think was all pretty much “excepted”. Time for another trophy in Katowice? (More photos of IEM Katowice on Flickr.com)

ESL: The Nordic qualifiers in particular were pretty packed with top tier teams, but only one will make it to the Qualifiers Finals. Do you think the teams “left behind” will turn the EU qualifier into another Nordic one or are there teams from other regions that stand a good chance?

GeT_RiGhT: I think when the Nordic qualification is over, some of the teams that didn’t make it will feel that they still deserve a ticket to the finals. Sure, why shouldn’t they try their luck at the EU Qualifier then? I mean, there is nothing wrong with trying a lot of times.

ESL: In Katowice you will be facing two US teams once again. Are you looking forward to competing against their play style?

GeT_RiGhT: Of course! It’s fun to play against the Americans and hopefully they can repeat what they did at DreamHack Winter. – Looking at coL for example 😛

ESL: Looking back at DreamHack Winter 2013, why do you think Katowice would be a good place to get revenge on Fnatic?

GeT_RiGhT: I don’t know, we’ll see what the brackets look like. If we meet them before the finals or in the finals again, I don’t think we will make the same mistakes again. But you never know, although I always aim for the first place at any tournaments we are playing! Cya in Katowice!

The EMS One Katowice Qualification does not stop!

This weekend four more cups take place. The German and UK cups will determine the final four teams for the Regional Finals. The third of fourth cups in CIS and Poland will add two more teams to the list. More details will be released on Friday!