From Eefje to Sjokz, or how I got into eSports

“You’re moving to Germany to do what?”

I can’t say I was surprised at my mother’s reaction, but I was determined to try my hardest to prove that this was an opportunity of a lifetime, and, almost two years down the line, it damn well was.

Rewind to eight years ago (my word, I am getting old) – fresh out of high school, off to the wonderful city of Ghent to study history. Moving to Ghent from my hometown Bruges was the first real change in my life – I finally met other people, broadened my horizon, discovered beer (but don’t tell my mom) and forged friendships that would last, as I’d like to hope, for a lifetime.

However, as I closed into the end of my history studies, an almost paralyzing thought crept into my mind: “If I finish school, I will start a job and do that job for the rest of my life and stay in the same place and never get to see the world.” That was an exaggeration, of course – careers grow and people change jobs and move, but in my head I wasn’t ready for the real world yet. University is tough, but you still make your own time – if you want to party all week and wait until five hours before the deadline to write a paper, that’s your decision.

In full panic mode, I decided to study for two more years – one year of journalism in Brussels and then a final year in Ghent for my teacher’s degree.

When I finished university, for real this time, I had six years and three degrees in my back pocket, but I didn’t feel any more fulfilled. If anything, I felt emptier and more insecure than I had ever felt. There were no more ways out, nothing keeping me from really growing up this time and building a life for myself…

Naturally all I did in the months after graduating was stay inside and play video games.

I had been absolutely addicted to the FPS classic Unreal Tournament before I went to college, but sadly the active community for that game had decayed a lot by the time I got back around to playing games. An old clanmate of mine suggested I try this online game called League of Legends – a MOBA, and vastly different to the game I was hooked on for so many years.

I wasn’t very good at first – and let’s be honest, I’m still rubbish – but I immediately fell in love with the game, mostly because I got to reconnect with my old gamer friends and it reminded me of those countless hours I spent in front of my old PC in the living room with my parents screaming during clan wars and shooting the night away.

Slowly, though, real life caught up with me, and I took some temporary jobs to pay the bills while still having enough time to play League of Legends. I worked as a waitress, cleaning lady, receptionist – I actually had a pretty good time working in different places and meeting different people.

After a couple of months of playing League, I randomly stumbled upon a livestream of the Intel Extreme Masters World Championship Season VI in Hannover. I was stunned that this game I had been playing for several months actually had a huge competitive scene with superstars and live tournaments. From that moment on, I started watching a lot more League of Legends and eSports in general, and became fascinated by their vibrant communities. It reminded me so much of my old Unreal Tournament days, and I started feeling the same passion for competitive League of Legends as I had for UT so many years ago.

I decided that I wanted to part of this community, and what started as a random thought during work turned into an obsession fairly quickly. But what to do with no connections in the eSports world and no real experience in the field?

SK also gave me the chance to work on a new project called Summoner’s Recap, a weekly show where I rounded up all the news from the scene. It had moderate success and some well-viewed episodes, but what was absolutely missing were, in my opinion, live interviews with the stars of our game.

Between working temporary jobs, taking care of the website and narrating and eventually editing Summoners Recap  I was swamped, but I wanted more – I wanted to attend live events and produce content fueled by the vibe of an offline tournament. But that was easier said than done.

My parents, my job agency and my friends were definitely not convinced that I was starting a career. To them, I was wasting my time playing games and squandering my talent by working – in their eyes – meaningless jobs. And to be honest, at some point I did start to believe that myself, but I wasn’t ready to give it up just yet.

In June 2012, SK Gaming gave me the chance to shoot interviews at DreamHack Summer. This would be the first time I would meet and interview the players I looked up to and wrote about every day, and it was nothing short of nerve-wracking. The tournament turned out to be amazing, with CLG.eu the eventual victors over Gambit. Nobody else was really doing interviews or pushing them out as fast as we were – we had quite the success with the DreamHack coverage, and for me it was invaluable experience. Back home I got word from SK Gaming CEO  Alexander Muller that Ongamenet wanted to invite someone from our organization to cover OGN Champions Summer, where teams like CLG EU and NA, Dignitas and Natus Vincere were competing.

I think that trip to Korea really signaled a change in both my mindset and the mindsets of my friends and family. Growing older, all I ever knew was that I wanted a job that made me happy and I wanted to see the world – I was never one to see being married with children and a white picket fence as the most important goal in life as I saw with so many of my peers – which is perfectly fine of course, but it wasn’t for me.. Going to Korea opened up so much for me in that regard – I got to experience and work with people who shared my passion halfway across the globe, and no matter how jetlagged I was, I just wanted to produce more content.

Our OGN coverage got so many views, and no matter how good of a job you do, that’s the only thing that will resonate with the people in charge and able to give you a job. That’s something I realized pretty early on, and throughout my time with SK I would sometimes turn to tricks to make sure people found the way to our videos. For instance, when I interviewed Alex Ich at the Season 2 World Championship, I talked to him for about ten minutes but when he uttered the words “I feel like NA players take things less serious and spend more time with their girlfriends”, all I could think of was “That’s my quote, and that’s how I’m posting it to Reddit!”. I wasn’t always proud of that, but that’s just the way the game is played (but more about that some other time!).

SK Gaming qualified for Season 2 Worlds and I got the chance to go with them, and with that visit the US for the very first time.

As far as culture shocks go, that wasn’t one! I had a fantastic time in Los Angeles, and at that point – if I wasn’t convinced already – I knew that this was what I was destined to do. At that time, CyberSportsNetwork reached out to me as well in order to cover some US events for them together with Rachel “Seltzer” Quirico, and I got the opportunity to visit MLG Dallas, Lone Star Clash and IPL. I remember the IPL trip very well especially because of the enormous contrast between the days in Las Vegas and my life back home.

I flew right home after IPL as Christmas was around the corner, and that’s when reality hit me. Hard.

My mother was very happy that I got to experience all these new things around the globe, but at the same time she also hinted at the fact that I should look into something steady as this was probably not something I could make a career out of. Same goes for the Belgian government – if you don’t have a job, they will chase you and help you to get a job, and for them obviously it was unacceptable that I had university degrees but wanted to pursue this “crazy dream” in a “niche business”. And financially at that time, I was also reaching a point where I couldn’t sustain myself any longer without having  a steady long-term job.

On top of everything, just a few months later the first LCS season would kick off, and I didn’t know how that would affect my content creation and wasn’t sure if anyone would hire me full time to cover the league as no one else had so far. Long story short, I was going to call it quits. Until that one e-mail.

In December, I had attended the Intel Extreme Masters in Cologne, and completely out of the blue the producer let me do an interview with a member of the audience live on camera. Little did I know that it was actually an impromptu screentest to see if maybe I could work with the ESL in the future. 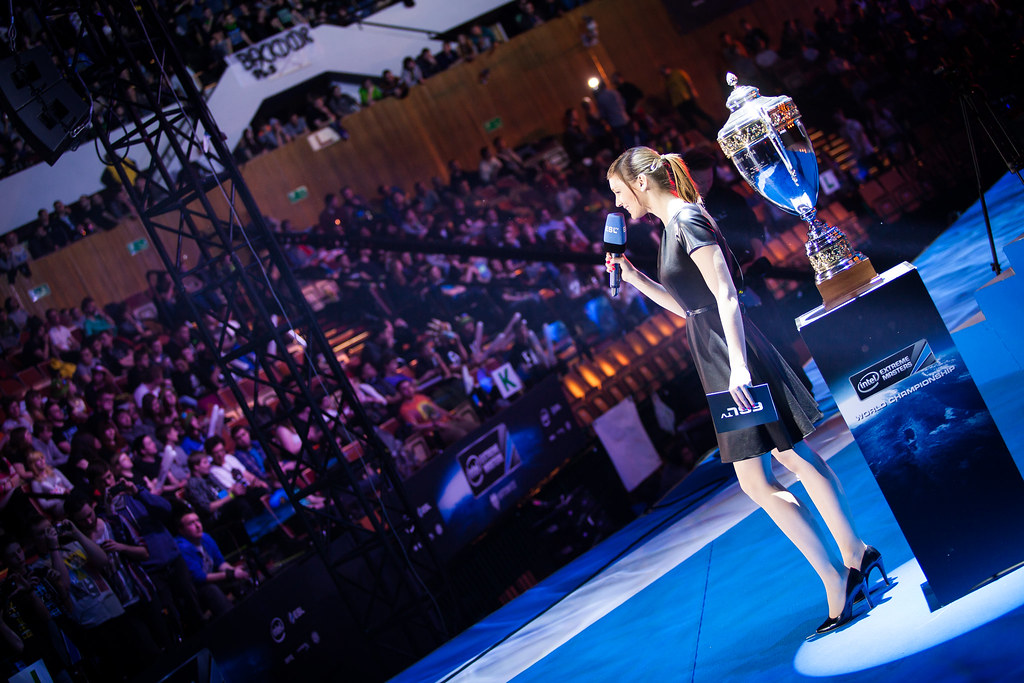 The head of ESL TV, Tobias Grieser, gave me his card and mentioned that maybe we could work together in the future. I didn’t think much of it at the time, but that impromptu screentest turned out to be my saving grace.

A couple of weeks later, just as I was about to give up, I got invited to Cologne to interview for the job of host of a little something called the LCS…

Stay tuned for the next installment in Sjokz’s story!

Additionally, if you fancy following in her footsteps, why not check out the first part of Paul “ReDeYe” Chaloner’s guide to becoming an eSports broadcaster?