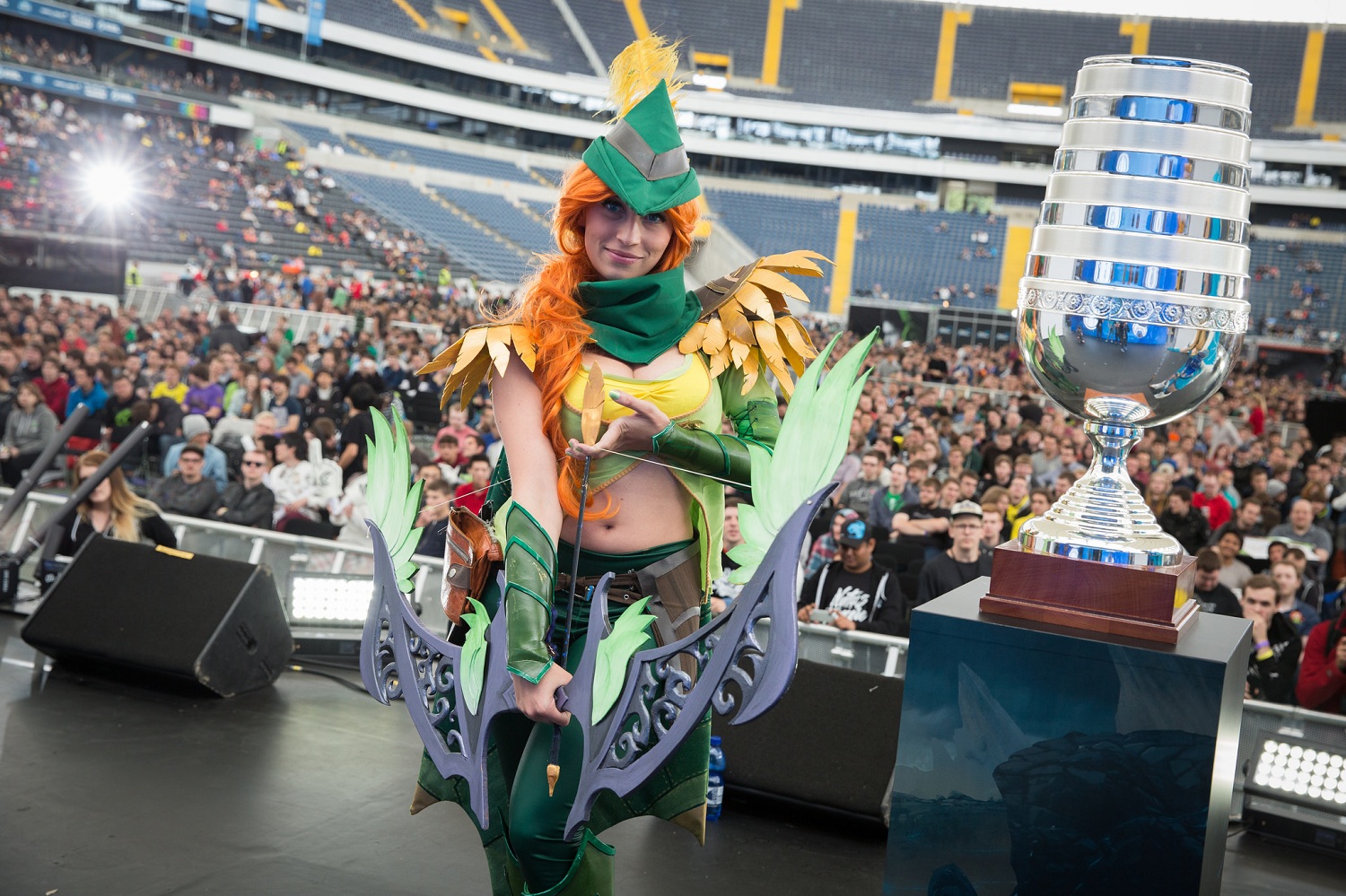 ESL One Frankfurt 2014 saw some amazing cosplayers, with their presence and participation going beyond the competition itself as they roamed the Commerzbank Arena during the entire event, adding to the atmosphere for everyone present.

One of the most outstanding cosplays was Kittycricri’s Windrunner. Her fantastic crafting skills were recognized by the judges, and she took first place in the cosplay competition. Since Kittycricri is participating in the competition again this year, we took the opportunity to chat with her about cosplay, ESL One Frankfurt and her plans for this year’s event.

ESL: Hi, Kittycricri! First of all, can you tell us how your cosplay adventure began?

Kittycricri: Hi! I started enjoying cosplay about ten years ago when it was still some kind of obscure hobby people didn’t understand! 😀 I’ve always been very passionate about games and anime, which were introduced to me by my lovely older brothers, and I’ve always loved crafting and art classes. So, as soon as I was old enough, I thought I’d combine both of my hobbies and create costumes of my favorite characters.

ESL: Last year, your Windrunner cosplay won first prize at the ESL One Frankfurt competition. How did it feel to take first place?

Kittycricri: It felt really great, especially when the crowd congratulated me. That was the best reward – thanks, guys!

ESL: How long and how big of a budget did it take to create your costume?

Kittycricri: I think my Windrunner cosplay took me about two months, including a bunch of days I didn’t work on it. Regarding the budget, I’d say it was probably around €150 for the base materials, which is still pretty reasonable. I try to not go overboard with my cosplay materials!

ESL: Let’s talk this year’s ESL One. What cosplay are you preparing for 2015’s event?

Kittycricri: This year, I decided to bring something less known: Shendelzare (and a little Captain Bamboo as my shoulder companion)! I’m secretly hoping they’ll add her design to the game in the near future.

ESL: What are your criteria when choosing your projects?

Kittycricri: Most of the time, I go for a combination of love for the character and the design. I don’t think I’d be able to work for months on something I don’t find visually appealing or on a character for whom I have no affection. This year, another reason was the fact that one of my friends is cosplaying as Vengeful Spirit, so I thought it might be great if we could cosplay together. If anyone wants to be our Skywrath Mage, they’re welcome to join us!

ESL: Do you think you can win two years in a row?

Kittycricri: I guess it’s possible with enough hard work and dedication. However, I don’t have high hopes for this year – the level will be very high and will easily reach the level of big European cosplay competitions. I’m sure the crowd will love the amount of great cosplayers this year!

ESL: What is your favorite thing about ESL One Frankfurt?

Kittycricri: I’m looking forward to what ESL One is about: spending two full days with other people who share the same passion! Last year, people were very social and I made great friends at this event. I was literally able to sit in any seat and people would just start talking about anything Dota 2 related. I’m definitely looking forward to this again.

ESL: Who is your favorite Dota 2 character and why?

Kittycricri: Without a doubt, Rylai the Crystal Maiden. She’s the one I started out with and even though she might not be the strongest, she’s the one that showed me my favorite role in a team, which is supporting my carries to victory!

ESL: What other video games do you play? Do you also cosplay characters from them (or any other films, cartoons, TV shows, etc.)?

Kittycricri: I ditched most of my games the day I started playing Dota, but my favorite games these days would be Left 4 Dead and Team Fortress 2. However, deep down my favorites will always be Megaman and Mario on the NES.

I do cosplay most of the characters that I think look cool and stand out. My favorites would be Cammy from Street Fighter, Major Kusanagi from GITS and the little fairies from Rayman Origins.

ESL: What is your dream cosplay?

Kittycricri: I don’t really have a dream cosplay but I do have a wish list which consists of making my favorite set of each female Dota 2 hero. I might skip Spectre and Broodmother, though!

ESL: Thank you for your time and good luck at the ESL One Frankfurt cosplay competition! Any last shoutouts you would like to make?

Kittycricri: Thank you very much! I’d like to give a big shoutout to all the cosplayers heading to ESL One Frankfurt this year and wish them good luck! Also a big thank you to ESL for supporting cosplayers and giving us all a wonderful time at your events! Expect some great quality costumes!

Be sure to check out Kittycricri’s Facebook page to see more and follow all of her cosplay projects!

Cosplay is an important part of ESL One Frankfurt, whether you want to simply roam the venue or take part in the competition. If you feel like testing your skills, make sure to sign up today!