“Everything feels more epic at a live event”: an interview with Austin “Capitalist” Walsh

Austin “Capitalist” Walsh is set to make his second appearance as a caster for ESL One after also having been a part of ESL One Frankfurt. However, before the Big Apple comes calling for him, we wanted to find out a bit about his metagame predictions, his life as a caster and his thoughts on the upcoming matches.

ESL: Thanks for taking the time to speak with us. So you’ve managed to cement yourself as one of the top current Dota 2 casters – how does it feel to attend big-name LAN events in person?
Capitalist: It’s amazing! I’m still astonished at how lucky I am to have the career that I do. This is a dream that I never thought was feasible, so every LAN event I get to attend is mind-blowing.

ESL: How is it different to cast from a live event compared with the office studio?
Capitalist: Well, when you get past the nervousness and tension, I’ve found that casting at live events amps up the whole cast. Everything feels more epic at a live event, and that feeling boosts the energy you give off in a cast.

ESL: If you had the chance to cover a different game, which would you choose?
Capitalist: I’m really looking forward to Left 4 Dead 3, and hope that it becomes a popular competitive game as I would love to cast it. So if I’m limited to games that are currently out, I guess I would have to say L4D or L4D 2, though they seem to be pretty dead now. Honestly, though, I don’t see how I could ever move on from Dota. It’s a game I’ve been playing consistently for about a decade now, and I don’t see how any other game could replace it. Dota is a game that has been around for such a long time and was often overshadowed by many mainstream games. Because of its underground status in the past, it was able to build this very tight-knit community that, now that it’s a mainstream eSport, is one of the most passionate communities out there.

ESL: Which matchup are you looking forward to the most?
Capitalist: I think this will be the first real test of Team Secret, and I’m looking forward to seeing if they can continue their win streak. As far as round one games go, though, Evil Geniuses versus Alliance really can’t be beat. 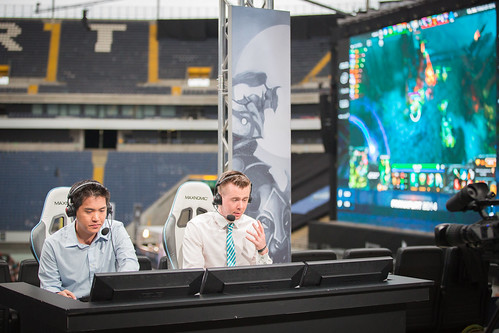 ESL: If you could predict the next big strategy to hit the competitive scene, what would it be?
Capitalist: It’s hard to say since the meta is so volatile due to the recent changes, but barring any further changes to the ‘comeback mechanic’ by IceFrog, I believe we will continue to stay much more late-game orientated than many previous patches. Now, that isn’t a shocking prediction, as we are already seeing this happen in the current climate, so predicting the reign of hard carries like Specter, Naga, Morphling, even Medusa seems fairly obvious. What we haven’t seen yet is teams adapting their offlane picks according to these changes. We still see many offlaners who are more mid-game impactful with some late game presence such as Centaur,  Tidehunter and Clockwerk. I believe we will see the rise of certain offlaners that have greater power in the late game, such as Dark Seer, Elder Titan, Magnus and Lone Druid. Of course Furion and Batrider, who are already popular and have great late-game potential, will be in the mix as well. I think you can already see signs of this with ET being picked up more and more while it seems like Clockwerk has dropped off significantly.

There will also be a similar response in the support pickups, as we can not only get greedier with our supports due to the new bounty rune which helps supports get small amounts of gold and XP all game long, but also because greedier supports tend to be better functioning ‘anti-carries’. Heroes like Shadow Demon, Bane, Enigma and Lion can be hugely beneficial in late-game engagements in shutting down a hard carry while typically not having as much early ganking presence. This will primarily be due to the fact that getting kills during the early to mid game is not as rewarding, and kill-orientated early to mid game strats are rarely is able to establish enough dominance for a sub-40-minute win

ESL: The team rosters underwent significant changes over the past weeks and months. Which teams will come out ahead in your opinion?
Capitalist: Well, you can’t really talk about new teams without immediately looking towards Team Secret and the dream team they’ve put together. Aside from Team Secret, who look the best of all the new teams, I would say that I’m a big fan of the new VG. I’ve been a Super fan for quite some time now, and I think Fy/Fenrir is one of the best support duos out there.

ESL: What do you think about a showmatch between the hosts and casters at future events? Who do you think is the best player among the hosts and casters, ex-pros excluded?
Capitalist: Sounds fun to me – I’ll jump on any reason to play more Dota! I’m going to cop out on the best player question and name a few names instead of just one. I would name Draskyl, Godz and myself as the best players (though I’ve never seen Godz play, I’m just assuming from his MMR). If I could include cameramen, I would also put Weppas in that pool as I know he’s pretty good as well.

If you want to experience Capitalist’s casting in action and much, much more, be sure to watch the games on the official ESL One Twitch channel on October 9th and 10th live from the Theater at Madison Square Garden in New York City! Alternatively, why not join us person? Grab your ticket here!

You can also check out our interviews with SirActionSlacks here and Na’Vi below: