“ESL really provides an excellent experience for all cosplayers”: we interview Meruna about ESL One Frankfurt 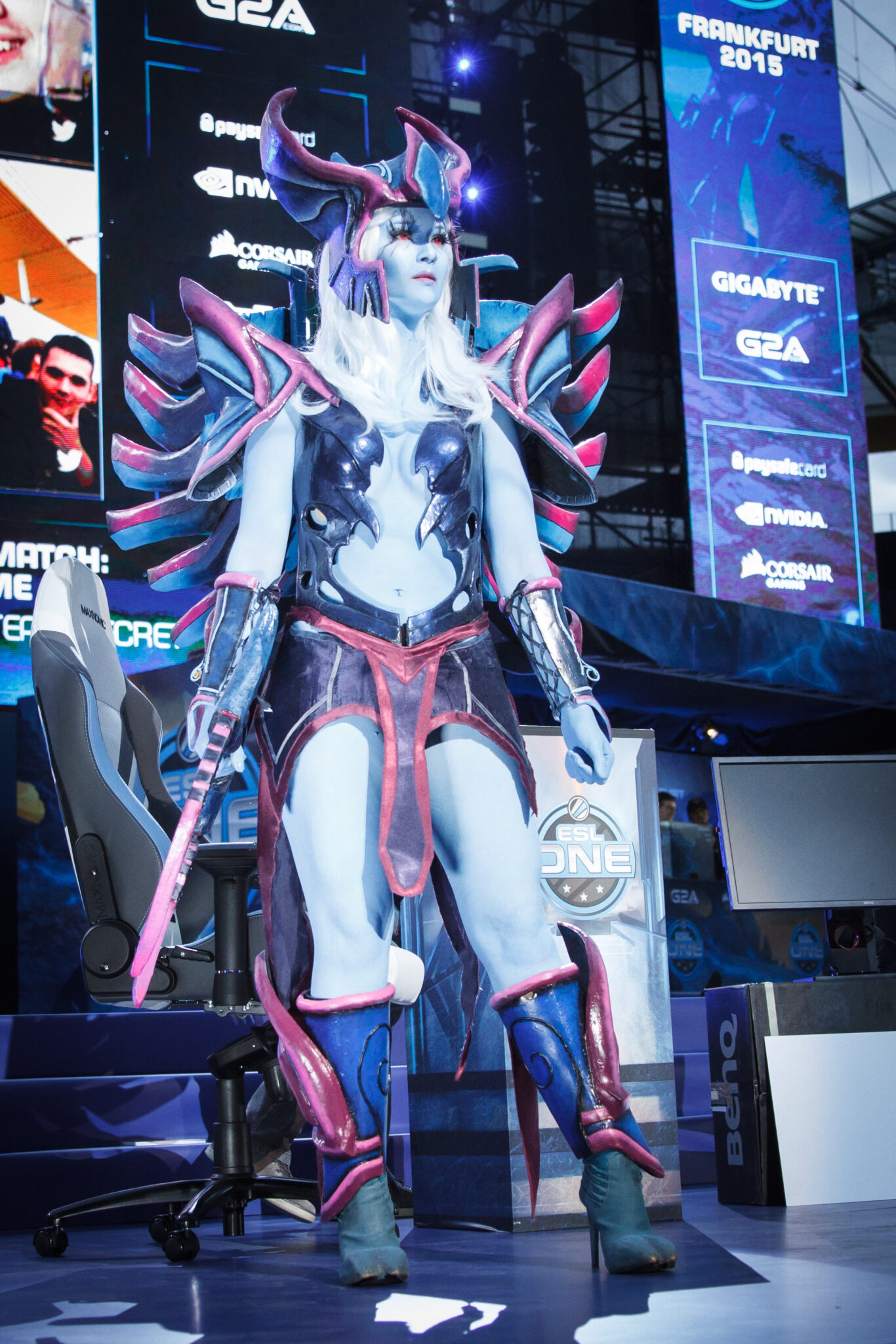 The past ESL One Frankfurt events were rich not only in amazing matches and passionate fans but also in talented cosplayers, who showcased their incredible crafting skills by dressing up as their favorite Dota 2 heroes. This year, the Commerzbank Arena will once again welcome a number of cosplayers including Meruna, an ESL One Frankfurt veteran.

Meruna was a cosplay judge at the 2014 event and participated in the cosplay competition in 2015, taking third place with her Vengeful Spirit. We chatted with her about her experience at last year’s event and her plans for ESL One Frankfurt 2016.

ESL: Hi, Meruna! Nice to be chatting with you again. What have you been up to since last year’s ESL One Frankfurt?
Meruna: Hey! Shortly after the event, I finished my bachelor’s degree and moved to Denmark to continue my studies there. Since then, I’ve have been trying my best to learn the local language while studying and cosplaying. I took a break from Dota cosplay and did a character from a rather unknown Asian MMO that I wore to DreamHack Winter and won third place with – maybe I can keep that streak going? 🙂

ESL: What was your reaction when ESL One Frankfurt 2016 was announced?
Meruna: I scrolled down the page to see if there was any information regarding cosplay available already, then saw the date and realized that I might have exams in that period. Oh well, luckily ESL One Frankfurt is on a weekend!

ESL: Tell us about your experience at last year’s event.
Meruna: The event was quite special to me – the Sunday (June 21st) was my birthday, and due to Frankfurt being close to my hometown of Stuttgart I invited my family to come visit the event on Saturday to see me in cosplay and experience that strange esports world. And they were stunned (and so was I, of course)! Additionally, I loved all the fun activities everywhere, though I didn’t have the time to try them out myself.

ESL: Many amazing cosplayers graced the event, yourself included. How was the overall cosplay experience for you, especially appearing on stage?
Meruna: It was amazing! ESL really provides an excellent experience for all cosplayers, great communication and are open to feedback. What was especially great was that everyone was able to switch in and out of their costumes in the stadium’s basement (in the soccer players’ changing rooms – my dad was excited to hear that!) and I could even take a shower there to wash off the body paint and enjoy the event after cosplaying. I also want to point out how friendly and helpful everyone was – event staff, security, even the talent whose chilling area was close to our changing rooms.

The stage appearance was quite surreal. It was pretty late already and I was tired, and suddenly I was standing on this stage with thousands of people cheering and taking photos. I will certainly remember that for a long time! (and how I kept thinking “don’t fall, don’t stumble” as I went on stage).

ESL: Which cosplays shown in Frankfurt were your favorites?
Meruna: Oh wow, there were so many! Of course, the other cosplayers in the top ten were stunning. I was especially impressed with Caefire’s Enchantress – I love unusual constructions like that. But there were also first-time cosplayers that did an incredible job, especially MissSnowfox’s Mirana, BlackHydrus’s Queen of Pain and the two female Bloodseekers (Angelina and Elle).

ESL: Tell us about the cosplay you’re preparing for ESL One Frankfurt 2016 – who will it be and why?
Meruna: I will be cosplaying as Wraith King in the Relics of the Sundered King set by ChiZ. After two pretty but rather revealing cosplays, I got tired of diets and felt like doing some kickass full body armor instead. At first I didn’t consider Wraith King an option, but the set I chose features a helmet so no one can see that I am not a bearded old man. Plus the design of the sword allows for disassembly for easier transport.

WIP of my Wraith King #cosplay. So much left to do! More info -> https://t.co/xQ5cAVStF6 pic.twitter.com/nJOksBwMqt

Right now I have finished building the armor out of EVA foam, which is a material commonly used for floor or yoga mats. It’s light and cheap – which is great as I have used 8 square meters so far! Next I’ll have to do a lot of cleaning up, then the priming and painting.

ESL: That seems like quite the challenge! Which part of the costume is the most difficult to make?
Meruna: That would be the sword. As I said above, the sword needs to disassemble to be able to travel to events with me, so I needed to construct the 1.5 meter sword in a way that meant it could fit into a suitcase but be assembled easily and stably. Because of the shattered design, I built a wooden core that I can insert two acrylic rods into and attach a handle to. That makes five pieces! Sometimes things in cosplay go wrong, but I honestly surprised myself with how stable this solution is, given the frail design of the sword.

Quite happy with how the bottom of the sword turned out. Looking forward to painting, but even more to bed now. pic.twitter.com/9TSdmZke7y

ESL: Will this be your first time gender bending and cosplaying a male character?
Meruna: I don’t think of this as a gender bend – the armour really hides me well and my goal is to appear in a way that people cannot tell I’m a girl. But it is the first time I am following a reference designed for a male character.

I have been asked quite frequently if it will be called “Wraith Queen”, but as I am sticking entirely to the reference I will just be calling it a “Wraith King” cosplay without any prefixes like “gender bend” (to be quite honest, “Wraith Queen” makes me think of a type of cosplay that I do not want to identify with). The only thing I am not replicating is his face. I chose the design because the helmet wouldn’t require me to, and I don’t want to put a lot of work – and making prosthetics and facial hair would certainly be a lot work – into something that can’t be seen later. I will be wearing a wig to cover my hair so I can take the helmet off without going entirely out of character, though.

Not done, but couldn’t help myself and had to try my Wraith King #cosplay on. More info -> https://t.co/hbBPyT8g8m pic.twitter.com/P7QmLH6Kdn

ESL: How tough do you think the cosplay competition will be compared to previous years?
Meruna: I think it will be insanely hard! The 2015 competition already featured so many fantastic cosplayers that even calling a top ten was impossible. And seeing what everyone has planned for this year’s contest… I will be giving my best in the contest, but I’ll definitely be entering it without any expectations.

ESL: What are you most looking forward to at ESL One Frankfurt 2016?
Meruna: Meeting all my cosplay and Dota friends! I only see those people at events, and that means sometimes I don’t see them for a full year. Of course, I am also really looking forward to the contest, wearing the cosplay and some great Dota!

ESL: Thank you so much for your time, Meruna. The last words belong to you!
Meruna: I’d like to thank Cem and SwissDotaCommunity for supporting me with my cosplay adventures. Of course, a big thank you to all my followers who keep motivating me to work even harder with all their kind words. Lastly, thanks to ESL for being so awesome to cosplayers!

See you in Frankfurt in June!

ESL One Frankfurt 2016 kicks off at the Commerzbank Arena on June the 18th but feel free to join us at Sam’s Sportsbar on the 17th for our group stage public viewing and opening party!

Tickets are available now so be sure not to miss this amazing event and a true celebration of Dota 2 – we’re looking forward to seeing you there.