Tonight the qualification for EMS One Katowice kicks off with the first cups in France, Nordic, Poland and the CIS. The top eight from Dreamhack have already been invited, while the next eight in line have to play the open qualifiers for a spot at Katowice. Let’s see which teams will triumph this weekend and advance to the national finals.

Eight EMS One Katowice slots are open and the race starts tonight. The first four qualifiers. Scandinavia in particular, are home to four of the teams ranked 9th to 16th at Dreamhack Winter, meaning it’ll be packed with good competition. The other regions also boast a great field of competition that will definitely bring some exciting matches to the servers.

With Titan eSports (former VeryGames) and Recursive out of the way, ESWC winner Clan-Mystik is the clear favorite in the French qualification. However, let’s not forget the others in with a chance: Evokate, Mistral, WARMAKER and WebOne, all former big French teams, have signed up for the first cup. Will kioShiMa and his mates be able to earn a spot right at the first qualifier?

Poland: With US split, who will win?

The Golden Five are no more. With the departure from UniversalSoldiers, the old team parted ways and built up new teams in their place. Newly formed AGAiN and MeetYourMakers have internationally proved lineups. Will they reaffirm their powerhouse status or will a different Polish team shake things up? 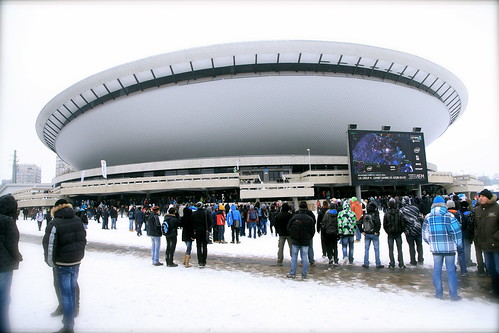 Who can make it to the Spodek Arena? (More photos of IEM Katowice on Flickr.com)

CIS: Who can shine next to Na’Vi?

Natus Vincere is the big favorite to take one of the two CIS spots for the EU Qualifier Finals. However, that still leaves one open, the best chance probably lying with Team USSR. Having won multiple Go4CS:GO cups in the past, mouseTT and his mates have since reinforced their lineup with hooch and kibaken. Can they deal some damage in the CIS qualifier?

Nordic: Who will win the best region?

There is no doubt about which region is the toughest to qualify in. With teams like SK Gaming, Reason Gaming, Xapso and n!faculty, the region boats four of the top 16 Dreamhack teams – the qualifier has more top teams than spots available. The likes of ESC Gaming, Finnish mixed team minttu and some other candidates are just waiting for one of the big teams to stumble. Will we see some surprises here?

Check out the full Nordic #1 participants

EMS One Katowice: The next steps

Next week, the second round of qualifiers is being held. Stay tuned for updates from this week’s cups and information about the signups.