The European ESL Pro League had a one-week break due to Intel Extreme Masters World Championship in Katowice, but this week matches resumed with plenty of intense CS:GO action. Before the week began, Team EnVyUs made a controversial change to their core roster, replacing  Fabien “Kioshima” Fiey with former LDLC.White player Timothée “DEVIL” Démolon. The former EnVyUs lineup went through a rough patch towards the end of 2015 as well as the start of 2016 after being crowned major champions at DreamHack Cluj-Napoca in November. Maybe now, following this change, the French side will return to their usual performance level.

Below, you can find a roundup of this week’s standings, some of the best highlights from this week’s action and more, so let’s get stuck in!

At the end of week three, Fnatic were leading the European region by three points ahead of Astralis, Ninjas in Pyjamas and Team EnVyUs, all of which would receive an invite to the ESL Pro League Season 3 offline finals later this year. However, the standings have seen some major changes after Astralis’s incredible run, with only one map loss – to the new Team EnVyUs side – out of six matches played.

Below you can find the updated ESL Pro League Season 3 standings at the end of week four:

Highlights of the week

In their first match of the week against Ninjas in Pyjamas, FaZe were put into a sticky situation as Joakim “jkaem” Myrbostad timed out of the match. However, that was no issue for the European side in one round as Mikail “Maikelele” Bill and Ricardo “fox” Pacheco cleaned up a fully equipped Swedish team with only pistols.

GeT_RiGhT returns as the King of Spray

Christopher “GeT_RiGhT” Alesund, a veteran of the game, shows us why the fundamentals of Counter-Strike: Global Offensive are so important as he calmly controls his M4A4 spray and takes down three members of Virtus.pro.

In the first round of overtime in their match against FaZe, Denis “seized” Kostin found himself in a one-on-one, AWP versus AWP, post-plant situation against Ricardo “fox” Pacheco. The 21 year old managed to pull off a ridiculous shot that most of us can only dream of hitting to edge his team closer to their first win of the week.

How to hold ivy with pashaBiceps

In round 22 of their match against G2 Esports, pashaBiceps played a key role in their 16-14 match win as he turned the tide against their French competitors with a two-for-the-price-of-one shot on Cédric “RpK” Guipouy and Richard “shox” Papillon.

DAMN! That’s one way to hold Ivy on your own @paszabiceps #CSGO #ESLProLeaguehttps://t.co/jFeZp6ZvmC

Just another day at the office for NiKo

Team of the week 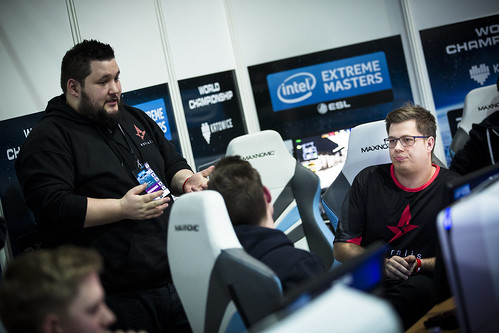 Without a shadow a doubt, Astralis are your team of the week after, as previously mentioned, only dropping one map out of a potential six. The five-man lineup’s only loss materialized from the newly formed Team EnVyUs lineup after a very one-sided 16-7 win on de_inferno.

Of the matches they won, the Danish side dismantled all of the competitors who stood in their way after convincing wins transpired throughout the week, including a 16-4 win over mousesports and a 32-12 series win over one of the struggling sides in the league SK Gaming.

At the beginning of the week, Astralis stood at second place with a record of six wins and two losses, accumulating a total of 18 points – three points behind league leaders, Fnatic. After the completion of week four, Astralis took the number one spot away from Fnatic as they now hold a record of eleven wins and three losses, totalling 33 points.

Tune in next week for even more action!

Week five of the ESL Pro League features an action-packed schedule, guaranteeing another week of nailbiting action. One series to look out for is Team EnVyUs versus Natus Vincere on Sunday the 20th March as the CIS side have the opportunity to claim EnVy’s qualification spot for the LAN finals with only four weeks of the online league remaining.