Another stellar talent lineup for ESL One New York

With eight of the best Dota 2 teams set to battle it out at the Theater at Madison Square Garden on October the 9th and 10th, it’s only fitting that the event will be brought to you by some of the best talent in the business.

Frankfurt fan favorites Toby “TobiWan” Dawson, Austin “Capitalist” Welsh, Troels “Synderen” Nielsen and Ben ‘’Merlini” Wu will all be returning for ESL One new York, this star-studded commentary lineup to be supported by the talented Soe “Soembie” Gschwind, who’ll be providing you with on-site interviews and additional YouTube content.

ESL One New York’s talent lineup includes both old and new faces, with eSports legend Marcus “djWHEAT” Graham lending his years of professional broadcast and hosting expertise to guide the audience through the event alongside big stage newcomer Jacob “SirActionSlacks” Kanner, who will helping to provide interviews and give fans a feel of what it’s like to be right there in the middle of the action.

The analysis desk will once again see Jacob “Maelk” Toft-Andersen and pro player Sebastien “7ckingMad” Debs take the reins, with Ted “PyrionFlax” Forsyth making his return to ESL events to join the panel for pre and post match discussions and hosting by ESL’s very own Paul “ReDeYe” Chaloner.

We sat down with Paul to chat about the talent lineup as well as the upcoming event itself. 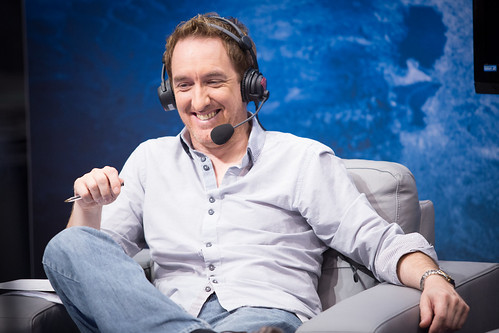 ESL: After such a great event in Frankfurt, what do you expect from
New York?
Paul: More of the same! Great teams, great players and the same level of excitement from the fans. It’s a unique opportunity to watch Dota 2 in one of the most legendary venues in the world and to cheer, scream and shout for your favourite team – who would want to miss that?

ESL: In New York, you’ll be joined by old friend and co-commentator Marcus “djWHEAT” Graham – how does it feel to be working together again?
Paul: Fantastic. Marcus is someone who brought me in to big events in eSports back in 2004 and 2005 and I will be forever grateful to him – working alongside him, I learned so much about how to host shows. It’s awesome to be able to work with him again and I think the Dota fans are going to love what he will bring to the show.

ESL: Next to the old hands, we’ll also be seeing some new talent, specifically Jacob “SirActionSlacks” Kanner. How was the decision to bring him on board made?
Paul: James (Kennigit) and I discussed how we wanted to keep pretty much the same team as Frankfurt but that we definitely wanted a North American flavor to the show as well. James actually suggested Jake, and after watching his interviews back and seeing his fun side, I agreed he would be awesome in this role. I think we have the serious side covered well, but the lighter side needs to be covered, too, so hopefully he’s the yin to my yang! 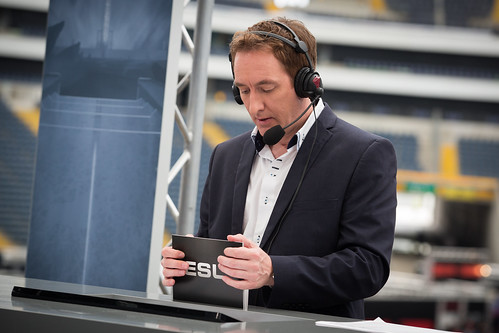 ESL: You’ve experienced American crowds before – do you think they’ll cheer louder than the German one at Frankfurt?
Paul: Hard to say, but I am certain they will make a LOT of noise! American eSports crowds are always passionate and knowledgeable, and if they have a home favorite to root for you can bet the roof is coming right off Madison Square Garden!

ESL: You were in New York last year, hosting Intel Extreme Masters New York during Comic-Con. Can we expect any costumed ReDeYe appearances this year?
Paul: Haha possibly not! Without Bruno there, though, I feel a certain responsibility to step it up in the suit department, so maybe I’ll bust out something a little more outrageous to cover that, but you aren’t going to see me in Windrunner cosplay any day soon unless I accept some kind of ridiculous Carmac bet…

ESL: In the last year, you’ve hosted at several massive locations: the Spodek, the Commerzbank-Arena and now you’ll be heading to Madison Square Garden and the SAP Center. Do you ever get used to standing in front of such massive audiences?
Paul: You never get used to it – or at least I don’t – but I also don’t get tremendously nervous about it, either. I think with experience of these enormous venues, it becomes easier to put it to the back of your mind when you are on the show and you just slip into job mode once the camera goes on, but I do try to take it all in – the sights, the sounds, the atmosphere – and feed off that in the show without letting it overawe me.

Saying that, I still get butterflies just before we go live and my stomach knots a little with anticipation as I run through the last things in my mind of how I am going to open the show. It’s a huge adrenaline rush and one of those awesome moments that’s partly why I love doing what I do.

I think the day I take for granted working a show in a huge venue is the day it’s time to stop working.

Make sure you’re ready to experience the thrill of ESL One New York first hand this October – buy your ticket now!