Three events are in the book and three proud champions have already booked their tickets to the LAN finals – now only one remains to be claimed. So far spots went to two invited players, Lifecoach and Kolento, until South American newcomer Kabi broke that streak and punched his own ticket to the prestigious LAN event.

Now it’s time for a new group of challengers to start the journey to the ESL studios to follow in SilentStorm’s footsteps and become the next ESL Legendary champion.

For the two invited players, both a spot at the LAN final and their imminent conflict looms ahead. The rivalry between Reynad and Amaz – and their respective teams TempoStorm and Archon – has been brewing for months. With shots being fired on stream, Reddit and in tournament bios, both have made it abundantly clear that there is no love lost between them.

Now the Hearthstone community can look forward to yet another potential matchup between these two big stars, with their rivalry splitting the community into two Twilightesque camps – you’re either Team Reynad or Team Amaz.

However, the drama-thirsty community will have to sit back, wait and hope for the brackets and stars to align just right, as the players aren’t scheduled to face each other straightaway. TempoStorm’s fierce and vocal leader Reynad will have to fight his way through Group B, while Intel Extreme Masters Shenzhen champion Amaz has to make it out of Group A in order for the highly anticipated matchup to happen.

While the potential for another chapter in the Reynad/Amaz feud would provide a great storyline, the two’s individual accolades are still nothing to be trifled with. The ESL Legendary Series offers a great chance for both of them to showcase their skills on one of the biggest stages Hearthstone has to offer: a 16-man LAN event with US$25,000 on the line in a sunny Californian location is something a lot of people would want to play for.

Despite the conflict and rivalry, both have similar positions in and a similar past with this tournament. For Reynad, it’ll be the second chance for a first impression in the ESL Legendary Series. The popular streamer and founder of TempoStorm was one of the first players to receive an invite to the debut season of the tournament series, with him placing third right away. Sadly, back then third place wasn’t quite enough to get reinvited to the competition, and so he played himself into contention in the Challenger tournament as well. Ultimately he ended up one game shy from another Legendary Series weekend, which makes third place his best result so far. 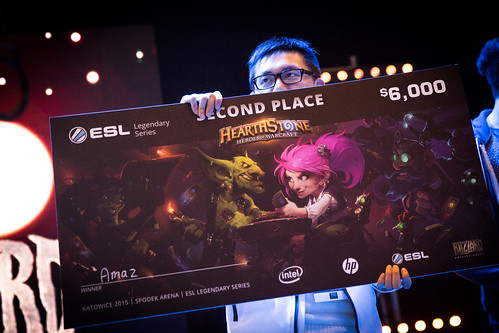 Amaz’s history with the tournament series is a bit longer, with the star of the early Hearthstone era not only having claimed an ESL event championship title but also getting to the grand finals of another. The player from Hong Kong was invited to the Legendary Series in the first season back in week seven, placing third right away and thereby getting another chance to play in week eight. Both of these times he was denied entry to the LAN event but got an invite to the Katowice event instead, replacing ek0p in the process. The massive esports event in Poland turned out to be his lucky break – until he ran into Orange in the grand finals. The former DarkStar member defeated him in a clean sweep, ending Amaz’s dream of his next major title.

Despite all this history, this will be the first time both Reynad and Amaz will be part of an ESL event, so brace yourself, Hearthstone community – we might be heading towards a great show as two of the game’s biggest stars appear to be on a collision course.

Of course, all the hype surrounding the potential clash of two of the game’s biggest names could fall flat given the great talent that’s managed to make it through the Challenger tournament once more. For the second week in a row, TooWet, a previously lesser known American player, has made his mark and defied the odds. The impressive feat of making it through two separate open qualifier tournaments for a chance to rumble with the big boys has only been achieved once before. Back in the first season of the ESL Legendary Series, it was Pinpingho who accomplished this, not only being part of the LAN finals in Burbank, California, but also making a name for himself. This netted him invites to pro leagues and the chance to step out of the shadows and into the bright light of Hearthstone scene fame. In season two Leadpaint also made it to the group stage through the Challenger tournament twice, but without getting to the heights Pinpingho achieved.

TooWet is now at the crossroads, only a good result removed from a potential huge boost. His first time at the big dance ended with him making it out of the group stage only to fall short against later winner Kabi. To his credit, though, TooWet was the only player in the entire playoff bracket to take a game away from the South American, who went on to 3-0 both Ignite and Savjz in the following matches. Now he gets another chance to prove himself, fighting for survival in Group B alongside Reynad, BunnyMuffin and Domdus.

TooWet is known from the ESL Legendary Series, Reynad is known from his streaming presence and BunnyMuffin is one of the premier open bracket warriors, making deep runs in almost all of them. The only big wildcard in the Group B equation is Domdus. The North American hasn’t ever been in the spotlight, but cut an impressive path through the Challenger tournament nonetheless. As a matter of fact, history has shown that open bracket veterans are always dangerous in tournaments, especially someone who eliminated ESL Legendary Series Katowice players in the form of James and Nalguidan, an ESL Legendary Series season two player in Azuzu and a BlizzCon World Championship top 16 player in Greensheep. All of these players have previously fallen to the talents of Domdus, who’s now looking to increase his stock in an already stacked group. 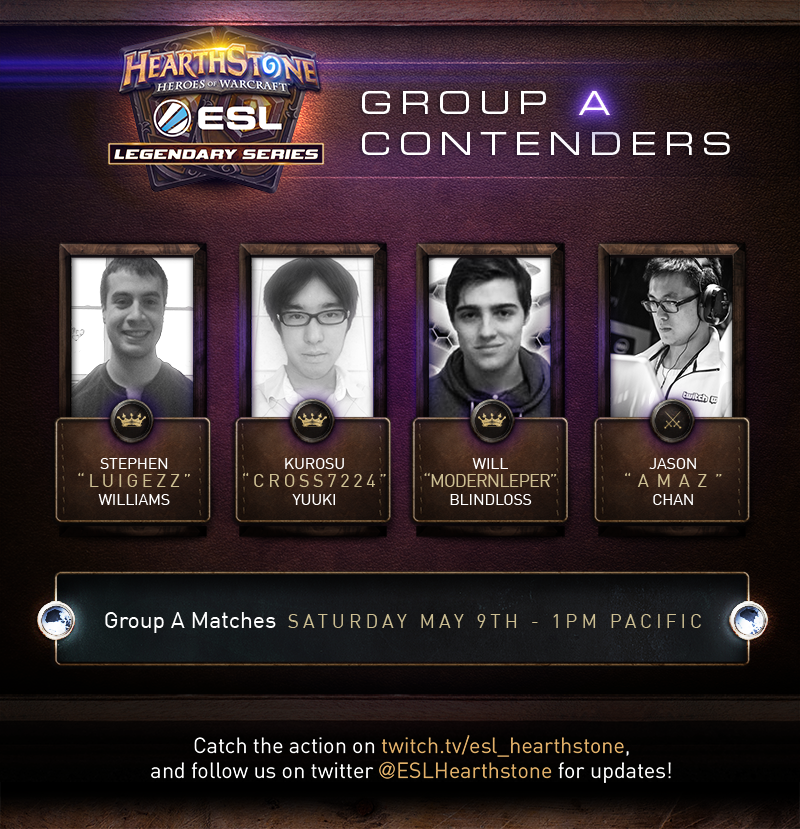 With four Americans, Group B is already unique in itself, while Group A has an interesting cocktail of different nationalities set to clash. The aim of the ESL Legendary Series has always been to showcase up-and-coming talent from all regions. In the first season, it was the Taiwanese players to make an impact, in Katowice it was an Argentinian who took the spotlight – just like Kabi as he seized the opportunity to shine in week three.

Overall, 16 different nations have entered the tournament, with four of them currently being represented in Group A. With Amaz being the first to carry the Hong Kong flag and modernleper the first Brit so far, both players carry the weight of their nations on their shoulders. LuigEzz, meanwhile, is sporting the red, white and blue, while Cross7224 is representing Japan to round off the group’s international flair off.

Which nation – and player – will reign supreme and get glory, fame and a trip to Burbank, California? Find all the answers live on stream as Frodan and Azumoqt man the mics and make sure you don’t miss a second of the explosive ESL Legendary Series action as the final LAN spot is fought for!

For more information about the ESL Legendary Series, make sure to head over to the official website for matchups, brackets and more.