“All of the people at the event just blew me away”: we chat to Storm Spirit about ESL One Frankfurt 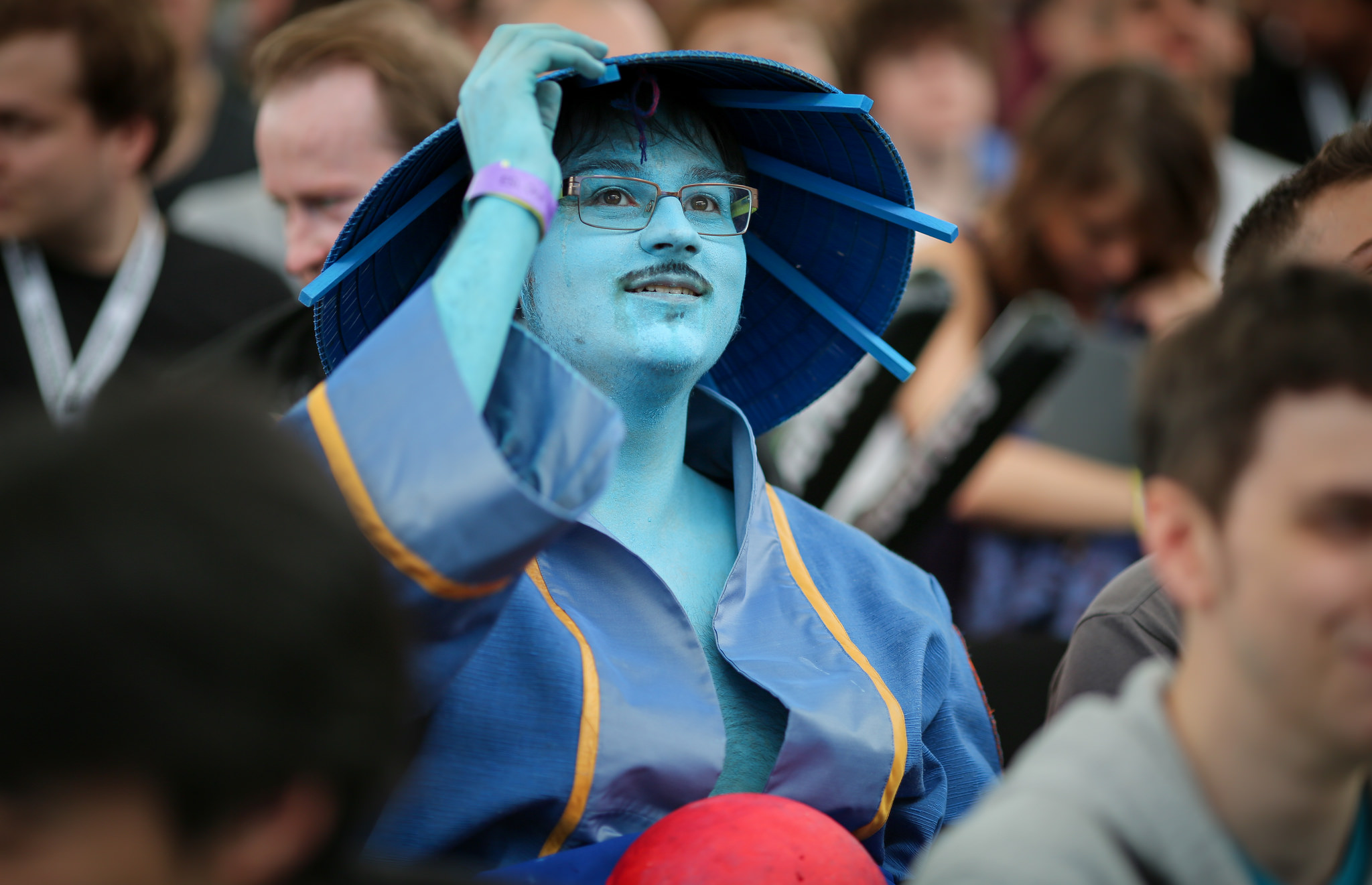 ESL One Frankfurt is fast approaching and with it plenty of great matches, side events and, of course, the amazing crowd! Indeed, the Commerzbank Arena’s passionate crowd is one of the main reasons why ESL One Frankfurt is an event not to be missed. We got the chance to talk to Merlino “Merlo” Milone from last year’s event, whose Storm Spirit costume received great feedback from attendees. He’s returning this year with a new costume, and so chatted to us about this as well as looking forward to the exciting event itself.

ESL: Hi, Merlo! First of all, please tell us how your adventure with cosplay began.
Merlino “Merlo” Milone: It started with ESL One Frankfurt 2014, really – I’d never cosplayed before or after that event. I just did it because I thought it would be fun and interesting. And it actually was! But cosplaying in general is not my kind of jam. Sure, I do love bringing some Dota 2 cosplaying action to Italian comic cons in general, but you won’t see me doing seven to eight original cosplays in one year.

ESL: When did you first get into Dota?
Merlo: Since the first installment, but I was so young and didn’t really care about what I was doing. DotA players will remember for sure that hacking and matchmaking in general was a nightmare in the good ol’ days, and eventually I lost interest and moved on to HoN thanks to a friend. However, after years and years I finally had my Dota 2 beta key, and I haven’t stopped playing since (except the occasional ‘karma pause’).

ESL: Who is your favourite Dota 2 character and why?
Merlo: Storm Spirit for sure! He has so much charisma and he’s a lovable, obnoxious, goofball. On the gameplay side, he’s just plain broken in every stage of the game. Storm Spirit can literally carry an entire team, even if it’s on the losing side: a combination of high mobility and tons of nuke potential that has no equal.

ESL: What is your fondest memory from last year’s ESL One Frankfurt?
Merlo: As it was my first cosplay attempt I didn’t know how to handle the situation, so I was kind of embarrassed to just run around with my belly and chest hairs exposed (and I was completely blue on top of that). But all of the people at the event just blew me away. Everyone was super nice and supportive during and after the cosplay competition. I loved every minute of it, making someone smile or cheer with a funny pose or a picture. I also managed to run frequently from place to place to make everyone happy. Moreover, when I returned home I found out that the Italian Dota community managed to support me from afar with pictures, messages of encouragement and much, much more. It was the people who made ESL One Frankfurt amazing for me.

ESL: Why did you decide to cosplay as Storm Spirit?
Merlo: I was drawn to him because we are very much alike in terms of looks and personality. Also, as I said before, he’s one of my favorite heroes in Dota 2. 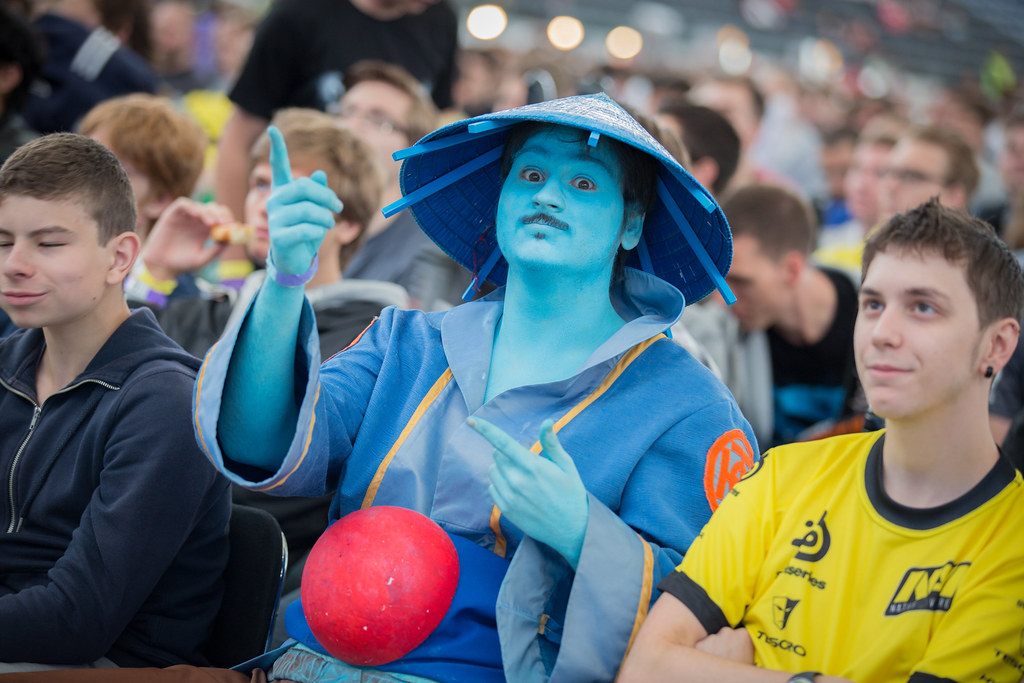 ESL: How long did it take for you get fully dressed and made up each day?
Merlo: Dressing up only took five minutes. The makeup, however, took me about two hours as I had a lot of body to cover up with multiple layers of body paint (it wears off/melts really fast at high temperatures). I must say it was a real pain the first day as I couldn’t drink or eat (body paint is highly toxic if ingested). I brought straws on the second day and that really saved me.

ESL: We heard you even went to the ESL One Frankfurt afterparty in your cosplay getup – did it make the night more interesting?
Merlo: Sure did, but it was a little weird. Literally everybody greeted me and smiled, even the players were extra nice to me, especially in the VIP area. Fun fact: I actually went in cosplay not because I wanted to, but because I had to. Body paint is extremely hard to wash off (you need like four showers in a row to clean up and even that might not be enough), so I dealt with it and went anyway.

ESL: Tell us about the costume you’re preparing for this year’s event.
Merlo: I’m preparing a Shopkeeper costume. It will be pretty normal tailoring stuff this time, with some item props and a birdcage staff. But we’ll see, as as I will be departing from Italy, I’ll have infinite problems with my luggage. I still don’t know how I’ll handle that aspect – if I bring too much stuff, I can’t check in for my flight.

ESL: Why did you pick this particular character? Do you think you share any particular traits with them?
Merlo: It’s a pretty original cosplay, I should say. Nobody has made one yet. He has a kickass trailer and I hope to recreate some of his creepy charm. Also we share the same *cough* weight *cough* and height (nope, I didn’t work out at all in over the past year).

ESL: What are you looking forward to the most at ESL One Frankfurt 2015?
Merlo: The thing I freaking loved last year was finally being able to talk with some high-profile casters and players. As an Italian caster myself, I found a lot of things in common with TobiWan, Synderen and Bruno. We spoke a lot about streaming, casting and metagaming over those two days. I hope to get in touch with them again and share some more points of view, especially with Synderen and Fear.

ESL: Which team are you going to be supporting in Frankfurt and why? Do you think they have what it takes to take first place?
Merlo: I have to say I’m a big fan of this year’s Cloud9 lineup. I think BigDaddy is a solid player and a great support – his Earthshaker made me tremble more than one time. I also like  EternalEnvy, who brings a lot of passion to the field. However, in the end, I have to bet on Evil Geniuses for first place. They are far more experienced (thanks to Fear) and better coordinated than anyone else.

If you want to join Merlo and the rest of the amazing crowd that makes ESL One Frankfurt an event to remember, be sure to secure your ticket for the biggest Dota 2 tournament in Europe!

For all the key information about the event, be sure to visit the official ESL One Frankfurt 2015 website.