“A team isn’t just built on skill”: chrisJ about mousesports at Katowice

Chris “chrisJ” De Jong and mousesports have already come a long way. After ups and downs in 2014, their new team for 2015 got announced and saw German CS legend gob b return as a full time CS:GO player. We spoke to chrisJ about the changes, how he sees their new team perform and what the offline qualifier means to them.

ESL: Hi, Chris, and thanks for your time. Congratulations on making it to the offline qualifier, which means you’re only one step away from playing at ESL One Katowice! How much do you want to join PENTA Sports as the second German team?
Chris “chrisJ” De Jong: Hello! Thanks. We are happy to have made it to the offline qualifier since the teams competing in the online pre-qualifier were already quite strong. We are going to give everything this weekend to join PENTA as playing at ESL One Katowice is our main goal.

ESL: Your team has undergone some drastic changes, resulting in a big difference between your current lineup and last year’s. Why did you decide to make these changes and how happy are you with the results?
chrisJ: It is clear that we had a few skillful lineups last year. A team isn’t just built on skill though, and that fact was made clear to us once again. This resulted in multiple lineup changes throughout the year. With the changes we made at the start of 2015, we wanted to improve both communication and team spirit, and I can certainly say we have achieved such improvement.

ESL: With gob b, you brought in a true legend and existing Intel Extreme Masters champion. How much does his experience give to the team?
chrisJ: The addition of gob b has brought us a lot. His input regarding tactics and preparation is amazing and his experience in top level Counter-Strike play clearly helps us. I think adding gob b has finally made us a team. Meaning we can win and lose games together and not only rely on individual performances to achieve success.

ESL: Your team and players are often criticized within the German community. Do you still follow what the community has to say about you?
chrisJ: The negative critics will always be the loudest. I often follow what the community writes, but I learned to not take most of the comments serious. It is not only negative though, we have quite some supporters too and we appreciate that a lot. Hopefully we can make those people proud this event! 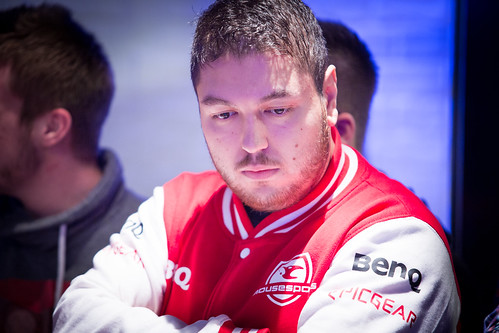 gob b joined mousesports as a full time player for 2015

ESL: This offline qualifier was introduced as another step to prevent cheating among pro players. Do you relish the opportunity this additional event gives you to show your fans and critics what you can do before the main one?
chrisJ: It is another great opportunity for us to show everyone what we are made off. But most of all I’m happy with the direction ESL and VALVe have taken to combat the problems of online play. Cheating, DDoS, lag and things like that shouldn’t influence a qualifier to a Major CS:GO tournament with such a big prize pool. But I think we aren’t there yet.

I hope ESL and VALVe will take even more steps to prevent cheating online and at LAN. What I would like to see is organizers of big events providing the gear for players to use, since it is impossible for admins to check what players have installed on their USB devices (e.g. keyboard, mouse, headset). Now I hope nobody is cheating at LAN anymore, but I think it benefits everyone involved to limit the cheater’s possibilities as much as possible.

ESL: Taking a look at the other teams set for the offline qualifier, how much of a challenge do you think it will be to take a spot in the main event?
chrisJ: I think we have a chance for sure but the opposition will be extremely fierce. There will be no easy matchup this event, because every team there has a lot of talent and is highly motivated to attend ESL One Katowice.

ESL: Last year, Katowice not only break a lot of records but also had one of the loudest crowds in esports so far. How important is being part of this year’s event for you?
chrisJ: Since I was at Katowice last year with mousesports as well, I have seen the awesome crowd and atmosphere myself. For me that memory is a huge motivation to qualify for Katowice once again.

ESL: Both you and PENTA had new lineups for 2015. Do you think both of you have what it takes to put the Germany back on the map when it comes to Counter-Strike?
chrisJ: Certainly. PENTA consists of some very skilled players and already they have shown impressive results, for example reaching top 4 at ASUS RoG in Finland and reaching top 8 at Dreamhack Winter. Hopefully we can catch up with them and show the world the German (and Dutch ;)) scene is here to compete with the best teams in the world once again.

ESL: The final words are yours – do you have any shoutouts you’d like to make or things you want to say to your fans?
chrisJ: Shoutout to mousesports and their sponsors BenQ and EpicGear for their increased support this year. We will do everything to prove we are worth it. Also greetings to all our fans and supporters. Hope you cheer for us this weekend!

Get one of the last tickets for the offline qualifier!

What are your thoughts on mousesports at the offline qualifier? Do you think they can make it to ESL One Katowice 2015? Tell us in the comments below!