Why eSports crowds are in a class of their own

Two weeks ago yet another spectacular event for the eSports community came and went, when the finest Dota 2 teams from around the world conquered the Commerzbank-Arena in Frankfurt. Although the stadium, which hosted 4 games of the 2006 World Cup, was the biggest eSports venue as of yet, ESL One has not been the only event to bring eSports before massive audiences. Regardless of whether you look at the LCS World Finals at the Staples Center, IEM Katowice in Poland, LCS in the Wembley Arena, the many amazing crowds at exhibitions like GamesCom or CEBIT or massive upcoming events like The International 4 in the Key Arena or the 2014 League of Legends Finals in the Seoul World Cup Stadium, one thing becomes very apparent: eSports is growing and so are the crowds it is drawing.

Yet  having been at many eSports events going all the way back to small Intel Friday Night Games in the CCH in Hamburg, ENC Grand Finals at the old Games Convention in Leipzig or seeing the growth on display at three consecutive DreamHack events one realization stuck out throughout my weekend in Frankfurt: the size of eSports crowds is growing, but the way they act is staying the same.

Even as the arenas grow, the stakes get higher and the games get more exposure, the general mindset of eSports fans and spectators at the events is not really changing – they just love the games and are passionate about eSports.

Never has this been as clear to me as when standing in a the massive Frankfurt football stadium and realizing that the crowd, although just as loud, is nothing like your average football crowd. This in turn motivated me to take a closer look at how eSports crowds compare to the crowds of regular sporting events by looking at my past experiences and especially those I had the pleasure of experiencing in Frankfurt. 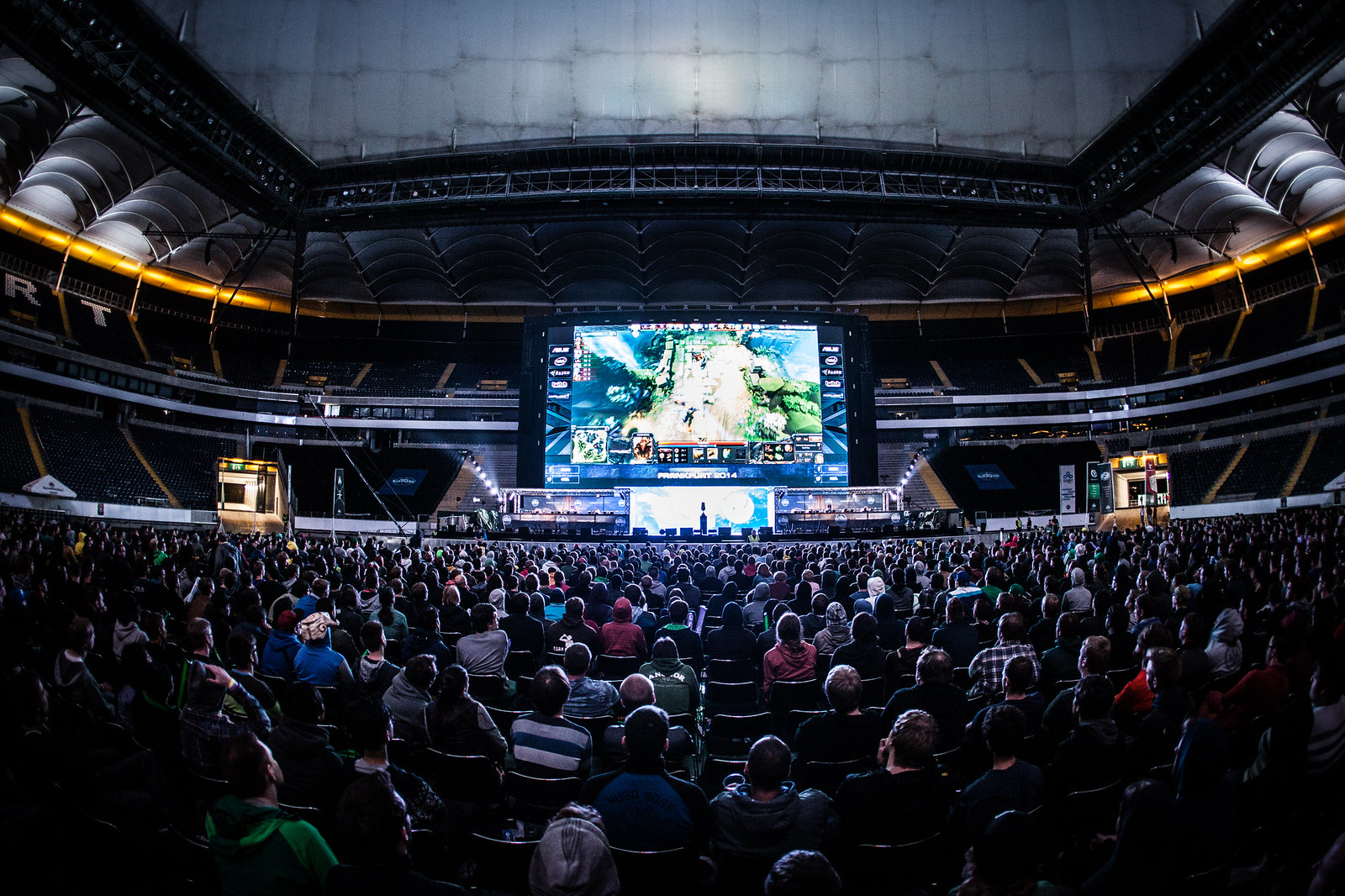 This one comes to no surprise to anyone. Deafening for anyone there in person, the crowd at ESL One was consistently audible on the broadcast and in the countless “highlight” videos, enough to give goosebumps to those watching from their sofas. Yet this is not only true for events in stadiums, but often even for smaller studio events or any event held in Canada (e.g. Season 3 WCS Finals).

For me personally, a couple of moments will forever stay in my memory from the previous weekend, the highlight of which nearly blew off the roof of the stadium. At the core of this “riot” was Pajkatt from mousesports, who turned the sea of people into a clapping and applauding crazed field, when he turned around a gank of the Chinese iG team. It led to firstblood – the first firstblood of the entire tournament – and also my first chills and goosebumps of the weekend. Fortunately for me, I was on the ground floor and in the middle of it all.

This was only the beginning and throughout the day more and more crazy ovations and noise was generated by the capacity crowd. The fact that it was even audible far away from the stadium was documented by a plethora of tweets, most notably by Michael ‘Carmac’ Blicharz.

I personally didn’t experience it, as I didn’t actually leave the stadium until all the games were over, but based on the noise inside it was a very real possibility that everyone in the area would hear the passion of 12.500 people watching the game they love the most oozing out of the stadium.

Still, the way it started I was almost afraid that the crowd had already reached it’s pinnacle – what a fool I was. Pajkatt play, as amazing as it was, was really only the kickoff to an overall event with high-level Dota and a supreme-level crowd. The win of fnatic over ViCi was met with standing ovations and the TI4 champion of Alliance as well as their challenger Cloud9 were greeted with chants and applause. What really resonated with me though was the crowd in Game 2 – the R[A]T game. As the crowd was pretty much split even in C9 and [A] fans, the struggle and resilience of Cloud9’s players against the annoying split push was clearly appreciated by the crowd. At the halfway point through the game a massive “Cloud 9” chant started in the Early Bird Premium area and developed into one of the loudest noises of the entire weekend. Even fans I saw cheering passionately for Alliance minutes before joined in, spreading the chant throughout the entire arena. It was going right to the core and everyone in the stadium had to be feeling history in the making. This was not just another event, this was a special event filled with a lot of special people that would travel around the world to see their idols play Dota 2.

That moment at the end of Day one really took the cake for me, but other moments will also definitely stay in my memory. Youngster zai` playing out of his mind and hitting insane ultimates with his Sand King, Dendi being the media darling that he is, having fun with the camera or fan favorite Chuan lifting the trophy as confetti rained down and the crowd collectively applauded with standing ovations. All those moments will forever be memorable in my mind, making this event one of the premier eSports events to reach the broad media and give them an understanding of who we are and what we are made off. 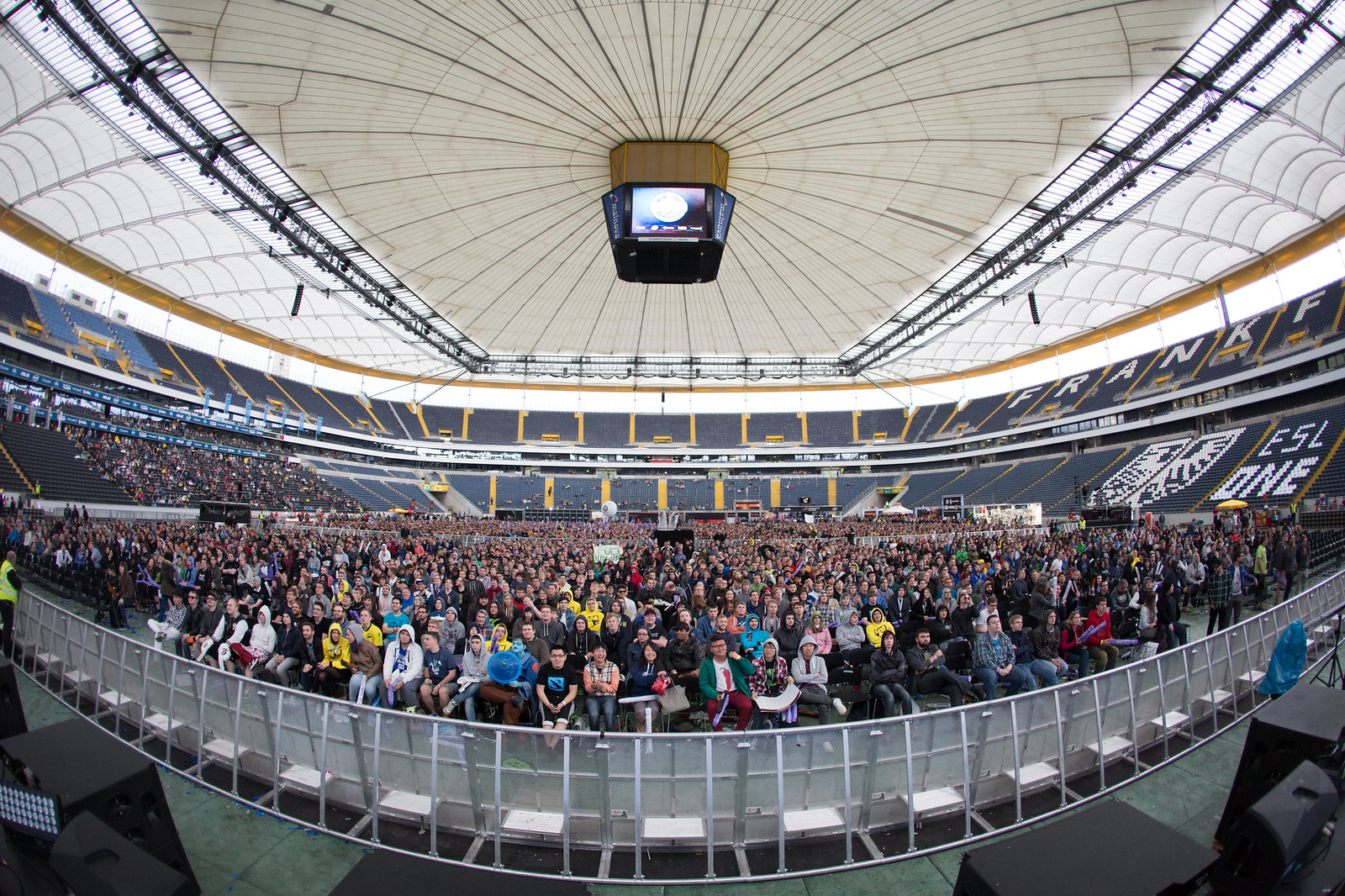 Everyone that has ever been in a twitch chat might wholeheartedly disagree with this, but everyone that was at the Commerzbank Arena or attends other live events has to agree: eSports crowds are amazingly fair.

As a longterm visitor of eSports tournaments I had never fully considered the uniqueness of this trait, until conversations at ESL One with smart members of the eSports media opened my eyes a little bit. The comparison to football, which was raised, makes sense here, because eSports and football are miles apart on this issue.

If you ever spend time in a European football stadium or watched national matches on TV, you will know the kind of behavior is often displayed. Although both crowds support their club and screams their lungs out to push them forward, the behaviour towards “opponents” is a more often than not, worlds apart. From “boos” to negative howling or even inflammatory chants – football fans have a huge array of “weapons” to degrade the opposing team. It goes from “cheeky” jokes to racist slurs and overall displays a level of aggressiveness that some young adults contemplating in bringing their smaller children to the game. The entire hooligan scene and other outbursts of “fan groups” on the road should not even be discussed here.

Throughout my time in eSports, I have also seen many crowds, many ovations and many cheers being split between the opponents. Just like in football, people have their favorite team,  favorite player or root for their region against other regions. So how is it different? Respect is involved. As eSports fans and eSports players go to through the same struggle of being recognized and accepted figures in the world, the two groups stick together. This “Psychology 101” observation might not be true, but the fact that eSports fans show a bigger appreciation for everyone involved certainly is.

I’ve already mentioned the Cloud9 against Alliance match, but a couple of other moments were displaying the same thing. When EG won against Na’Vi, the crowd didn’t boo for the North American team that just took down one of the absolute fan favorites, they were cheering and applauding ppd and his boys for an excellent performance and top-notch Dota. The same happened to iG after eliminated Alliance or iG won the Grand Finals. No one in the crowd was booing or not enjoying the moment, despite having cheered for [A] or EG throughout those matches. Instead a massive crowd of people that had been cheering on Evil Geniuses through the entire series started chanting “ChuaN, ChuaN, ChuaN” at the top of their lungs.

Another example from another ESL One event has to be the stay in Katowice. Virtus.Pro with Polish superstars like taz, Neo and Pasha were the absolute darlings of the fans, but after each victory from the players, the opponents were met with respect and chants. The moment the joy over your favorite team winning is overwhelmed by the desire to cheer “LGB” or “N I P” at the top of your lungs to thank the other team for a hellacious fight and great hours of entertainment. If you want goosebumps from one of the best crowd reactions I know, watch this full video.  I think football can learn something from it’s “little brother”. 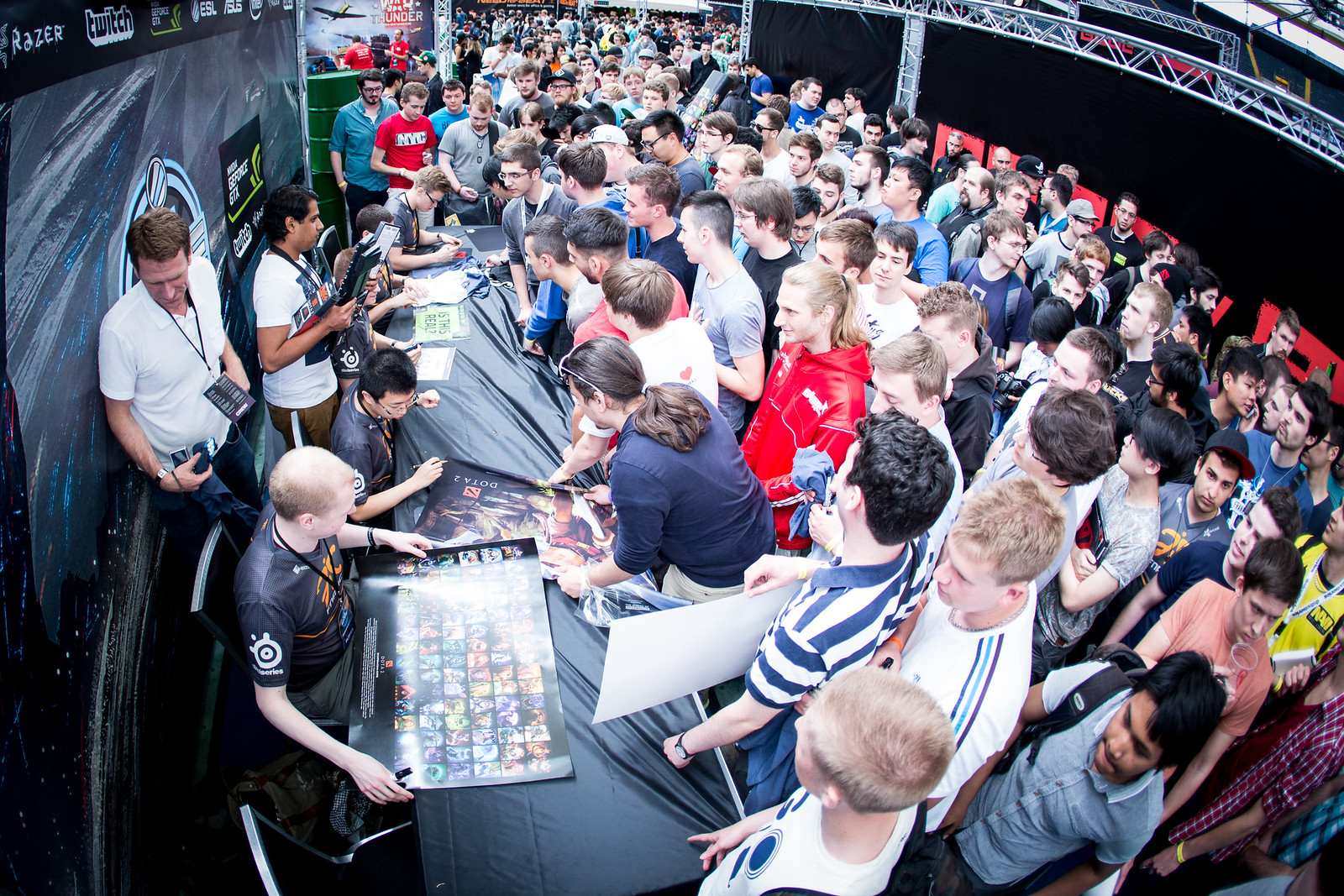 This has it’s positive sites, but also a negative. The negative one is clearly the urge to surge towards their idols the moment they are in sight. At Frankfurt, this caused some issues for the security and guards checking the badges and also caused minor delays as the player managers tried to escort the players to the booth.

The positives outweigh the negatives here though, as this starpower carries events and makes for impressive pictures. If anyone at the event tried to get from one side of the arena through the exhibition area to the other side, he might as well have been stuck in traffic. The simple reason for that was signing sessions of two teams in two different booths. At some point the queues to get an autograph with Akke, Ferrari_430 or Arteezy were so long, that they went through the area and down the exit hallway. For the audience passing through it was a hassle, for the filming and photographing press it was a blessing. Sales team member Nik Adams said it best in an interview with ZDF: “People come here to see their idols , watch the best of the best in this game.” 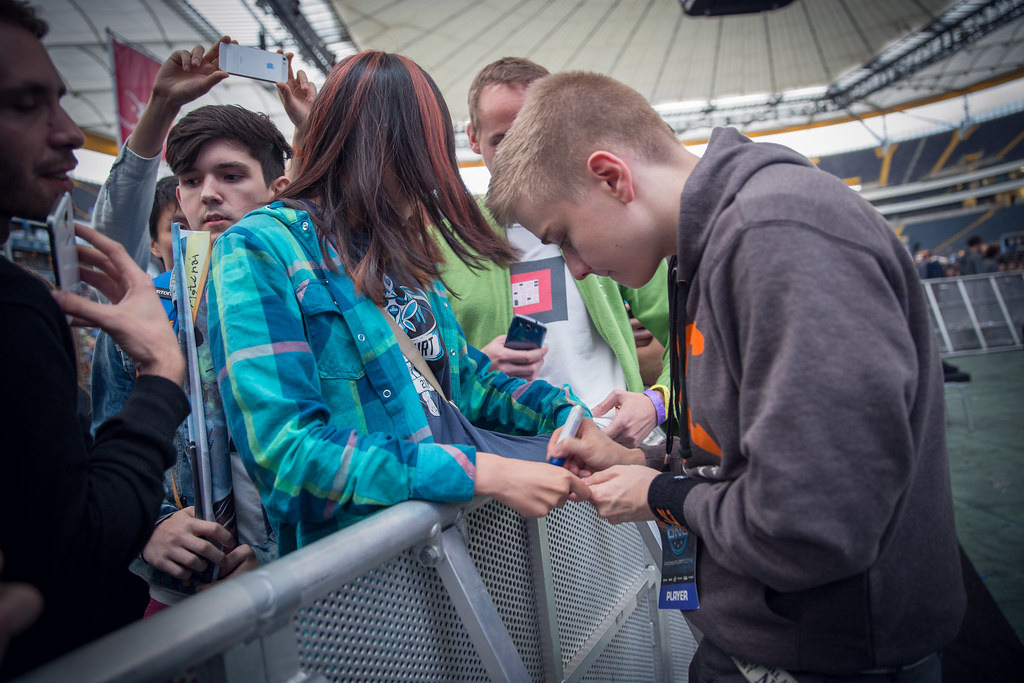 This was especially apparent in how players, officials and casters were generally treated like rockstars. The moment players left the player area or the stage, a mass of fans was already zerging towards them in hopes to get an autograph or an “ESLfie”. Not only players were constantly swarmed by fans, panel members and community icons like Merlini, Bruno or TobiWan received the same level of attention. People were walking up to the rope separating the panel from the premium area and engaging in friendly smalltalk, talking about the game, about the eSports career and then asking for a picture or an autograph. In many ways this was also one of the biggest differences to traditional sports however, as many of the players and casters actually mingled amongst the crowd and talked at great length to their fans. The stereotype of inarticulate people only captured inside their computer world was obviously conjured up by someone who has never actually attended a proper eSports event.

Showing the beauty of eSports

Overall the ESL One event in Frankfurt, showed me once more the beauty of this growing scene. People from all across the world jumped on planes, rode the train, shared a car or even hitchhiked from East Europe for nine hours to get to the venue. This happened much in the same way that people are currently getting ready to travel the world to attend the International, even though it is thousands of miles away for many of the participants. How many percent of the people in Seoul’s Sangam Stadium will have traveled to Korea to watch the World Finals on October 19th? I have no idea, but the great thing is that it will be probably be thousands of people.

I can only hope that the hype will stay the same, that the stadiums and venues get bigger and someday we all are viewed as some of the greatest fans in all of sports – without the “e” as a classification.