“We are far from afraid”: an interview with Onur “Lethilion” Aksu of Aces High

Intel Extreme Masters Cologne will be the first chance for Turkish team Aces High to make a splash in the scene. They may not be a household name for League of Legends fans at the moment, but they are at the peak in the ever-improving Turkish region. We got hold of captain and support player Onur “Lethilion” Aksu to talk about his team and their chances at Intel Extreme Masters Cologne.

ESL: Hi, Lethilion, and thanks for taking the time to speak with us about Intel Extreme Masters Cologne. Your team is relatively new and for many only the name Holyphoenix will ring a bell. How are your trying to change this?
Onur “Lethilion” Aksu: Like you said, the team is newly formed, but the players are well known in Turkish scene. Next year there will be a professional league in Turkey as well, similar to the EU/NA LCS, so our main focus will be dominating that league to get a chance at another Worlds experience. We’ll also try to compete and do our best in global events such as Intel Extreme Masters.

ESL: Your team was formed by Holyphoenix coming from Dark Passage and the rest being former Wild Fire players. How did Aces High get in touch with you and how was your current roster formed?
Lethilion: Actually it started with ex-teammates Thaldrin (top), Reosta (mid) and me (support) getting together with the goal of forming our own team. A former rival but good friend Holyphoenix wanted to join the roster as ADC. After Holy joined, we spent a while trying to find a suitable jungler, and finally decided on Theokoles. 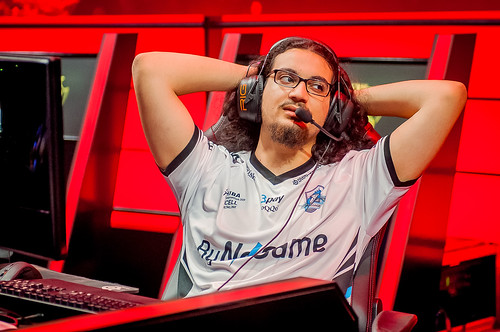 Holypheonix while still with Dark Passage

ESL: Dark Passage was at Worlds representing Turkey. Is this something you dream of when you think about what your team could achieve in 2015?
Lethilion: Worlds was a great experience for whole Turkish scene, not only for Dark Passage. With Holy and Fabulous leaving Dark Passage, this experience resulted in more teams. I believe that this will lead to better competition for the Turkish scene which will result in our scene growing more rapidly. Like I said, our main goal is to become Turkish champion and represent Turkey at Worlds at a better standard.

ESL: Taking a spot next to teams like CLG, Dignitas or Gambit could frighten some. How is it to play in a field of such big names?
Lethilion: We are far from afraid but more enthusiastic to play against such big names. First of all, it will be another great experience which we can use to benefit for our future goals. There are two players in our roster – Thaldrin and Theokoles – who already had the chance to compete against CLG at Intel Extreme Masters last year. I think they did quite a good job, especially in the first game. This year we would like to take it a step further.

ESL: When looking at the NA or EU LCS, would you like to see something similar being established for the Turkish region? Would there be enough teams for a fair competition?
Lethilion: Riot Turkey and esports here developed quite rapidly over the last two years. We’re getting closer to the NA/EU LCS in most aspects such as competition, viewership and event-wise. This year especially, with the start of the pro league in Turkey, we will get much closer in those aspects. Better players and stronger teams will arise, and this will help the whole scene in the long run.

Aces High – Can they be a real threat to the EU/NA LCS teams?

ESL: Many fans see nothing more than a potential dark horse in you. Do you share this view or do you want to change this perspective in Cologne?
Lethilion: We are aware that in teamplay, other teams will have the edge over us because of their experience. However, I believe that we have quite skilled players in our roster. Hopefully we will show our best and at least will give some exciting games.

Intel Extreme Masters Cologne starts next week, running from Thursday the 18th to Sunday the 21st of December, and will be loaded with League of Legends action. Secure yourself some tickets on the event page and check out our other Intel Extreme Master Cologne team interviews: