The summer of TaeJa or the decade of God?

Day three of Intel Extreme Masters Toronto was filled with plenty of excitement, both in-game and on-camera! The group stage concluded today, with everyone playing lights-out StarCraft, desperate to avoid elimination before the playoffs. This tournament has seen the rise of players who might have been considered past their prime, such as Life and YoDa, who have both claimed to rediscover their motivation to practice. We have also seen the resilience of foreigners, many of whom made it much further into the tournament than expected. Some people are simply playing to add another victory to their resume, and others are scrambling for the WCS points to make it to BlizzCon. No matter what their motivation is, this is definitely the best Intel Extreme Masters to date! 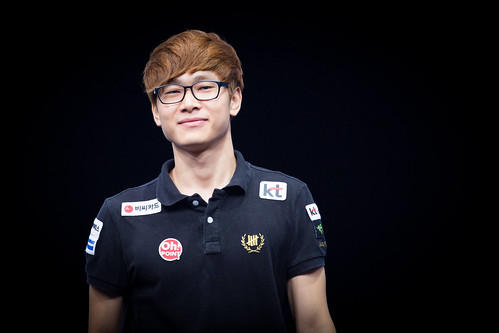 Zest really seemed to have Bunny’s number as he took the first match of the day in a clean 2-0 sweep. In both games Zest’s constant aggression truly tested Bunny’s multitasking ability, and meant that he kept his opponent on the back burner. Bunny played the first game in the dark and did not have the correct army composition to deal with Zest’s Collosi and High Templars. He managed to hold on in the game, however he simply could not handle the Zealot and Dark Templar aggression which was happening at the same time. Zest did not ease up on the aggression in the second game, attacking with Blink Stalkers at Bunny’s natural whilst dropping Zealots in Bunny’s main case. From there he was able to take a third base –  no easy feat for a Protoss on Merry Go Round. Quick Collosi caught Bunny off guard and forced him to exit the game and the tournament.

Leenock and viOLet played each other yesterday in an extremely close match, and it would turn out to be another tense one. In yesterday’s matches they both played very greedily in the early game, however viOLet threw a spanner in the works and went early aggression in the first two games. Leenock had to sacrifice his second hatchery to buy time, but was eventually able to equalize the game. viOLet managed to win the game by going for his Roach Warren before his Lair, which caught his opponent off guard. In the second game, Leenock once again managed to hold against viOLet’s 9-pool and actually took the economic lead by getting an uncontested third base up and running. Leenock reinforced his Roach army with Hydralisks, and the additional damage obliterated viOLet’s army. The two found themselves in the third game once again, and just by chance viOLet went for a much more economic build and defended Leenock’s attack with lead. Leenock realized he was playing from behind and went for a Baneling bust, which simply did not do the damage it needed to, forcing him to leave the game. 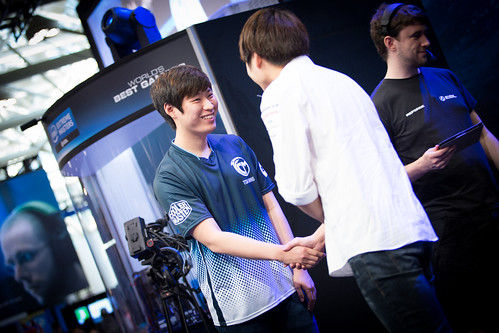 First crumbled in his first match against sOs yesterday, losing in a painful 0-2 defeat. However, he recovered from his loss well and looked like a completely different player coming into today’s match. sOs took the lead very early on in the first game, establishing his second base much faster than his opponent. This was countered by First taking a risky third base and massing an intimidating Chargelot and Archon army. Although sOs was able to hold against the attack, First’s superior economy allowed him to build Void Rays, which tore through sOs’s remaining units.  The second game was over much faster with First’s unscouted Oracle able to pick off eight Probe kills. sOs responded with a counter attack, which left his Probes completely vulnerable to First’s Oracles, leaving sOs with no choice but to GG out of the game.

MC played much more conventional games than in yesterday’s match against Flash. Flash was the aggressor in the first game, managing to pick off 12 Probes in a double Widow Mine drop. MC really did seem to be down and out, however excellent Blink micro from the Boss Toss allowed him to hold on in the game. Eventually both players had an even army, but Flash managed to exploit poor positioning from MC and picked off most of his army, sacrificing very little in order to do so. Overall it was a very patient and thoughtful game from the Terran, constantly scanning for Observers to deny MC the vision – something which eventually allowed him to win the game. The second game saw MC taking the driver’s seat and deciding on some two base aggression. He managed to force the lift and delay his opponent’s economy. Ultimately Flash would instigate the final engagement. MC was confident he could take the fight and met Flash’s army face on, however a large amount of Medivacs and reinforcements streaming across the map left the Protoss short changed. 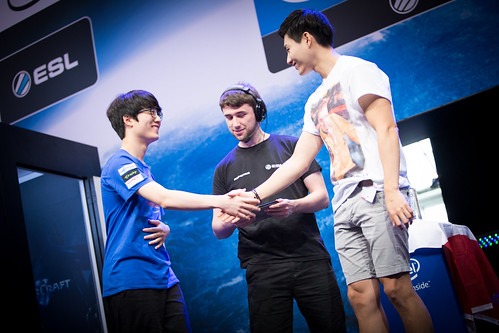 TaeJa took a quick 3-1 victory against viOLet, looking head and shoulders above his opponent. Early aggression in the first two games never really allowed viOLet to find his footing. A Marine drop in viOLet’s main base allowed TaeJa to slip Hellions into the natural, devastating the Zerg’s economy. viOLet was able to hold onto late game, however was never able to properly recover from his early losses. It was a similar story for him in the second match where TaeJa opened up with three Reapers, allowing him to fully scout what viOLet was doing. viOLet went for a Roach and Baneling attack, which was easily deflected, and from there TaeJa was able to run away with the lead. viOLet was able to take a game off of TaeJa, taking the early advantage in the third game with an early Roach attack. He then added on Hydralisks to his army and steamrolled TaeJa’s defenses. The final match between the two was very back and forth with both players trying to harass across the map. Eventually it boiled down to one last fight, where viOLet’s unupgraded Brood Lords lacked any relevance, and TaeJa managed to march on ahead.

Snute was highly confident coming into his match against Flash, boldly stating that he wanted to beat the Brood War legend on the big stage. The match opened with a hyper aggressive start from Snute, who went for a Baneling, Zergling and Roach push. Flash was able to hold, however had to sacrifice masses of SCVs in order to do so. Snute followed this up with effective Mutalisk attacks, keeping his opponent penned it to attack whilst allowing himself to fall back on his signature Swarm Hosts. Snute was able to clean up Flash’s army when the Terran decided to attack into his Swarm Hosts, as well as do huge amounts of damage to Flash’s base. Flash simply did not have enough leftover to make a comeback and conceded the first game. Snute continued with the onslaught in the second game going for a destructive Mutalisk, Zergling and Baneling. Flash simply could not defend allowing Snute to take an easy second map. Snute now only need to win one more game to advance to the quarterfinals, making things look extremely bleak for the Terran. However, his ten years of tournament experience allowed him to keep a cool head and make an extraordinary comeback. In the next three games it seemed that Snute overly committed to Baneling attacks, which simply did not do the damage it needed to – essentially throwing away units. Flash then went onto exploit these losses, particularly in the final game where he kept going for the multi-pronged attack. He targeted key buildings such as the Baneling Nest and the Spawning Pool, not allowing Snute to replenish his forces and taking the win. 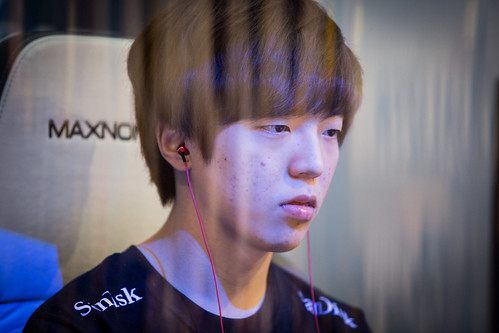 Life and First’s match is definitely the one to remember. Life took the set 3-0 , however the two played four games, with their second resulting in an unlikely draw. The second game was undoubtedly the match of the night. After a few skirmishes on the map, First settled on an air army, building three Stargates to maximize his Void Ray production. In response Life used a Nydus Network in order to try and break First’s natural. However the fire power from the Void Rays was too much and First was able to defend, whilst also destroying Life’s third base. For the first time in a long time (and probably the last time for the foreseeable) we see Carriers being made. Eventually the game devolved into a weird base trade situation, with Mutalisks attacking First’s buildings and Void Rays and Carriers attacking Life’s. Life had the minerals to rebuild his base, alongside a staggering 17 Spore Crawlers to defend. First managed to deal with Life’s Mutalisks, however he had no Probes left and his Interceptors had bankrupted him. The game would eventually rest on a handful of Drones and two Zealots who were fighting it out at the last mining base. Remarkably Life managed to kill off both the Zealots with one Drone remaining, leaving both players to agree on a draw.

After the odd shenanigans of the second map, Life moved on to prove that he was not a one-trick pony, and could also play macro games alongside his usual aggressive playstyle. The third game extended long enough for Life to make the transition into Swarm Hosts, Vipers and Brood Lords. First was making the Zerg player jump through hoops, with a barrage of Zealot warp ins doing huge amounts of damage to Life. However, Life was eventually able to catch out First’s army and kill everything off. Life managed to win the last game of the day due to poor execution from his opponent. First had correctly guessed that Life would go for a greedy opener on Overgrowth and so his seven Gateway and +1 attack upgrade should have been enough to win the game. Alas, First did not properly spend his minerals, attacking with a much smaller army than he should, and allowing Life to pick off his forces with his Zerglings. Life was then playing from an extremely comfortable position and managed to get a great surround on First’s units in their final engagement.

Make sure you tune in to the final day of Intel Extreme Masters tomorrow where we’re sure to see some incredible games of StarCraft II! If you missed out on any of the games so far you can read our day one and day two recaps, or watch the VoDs here!