The Intel Extreme Masters Toronto champion is crowned: Flash is back!

If you missed any of Intel Extreme Masters Toronto this weekend, we highly suggest a full VOD review, for the fun. But if you want a quicker recap or are looking to prepare before heading into a binge-watching session, read on. Skip to the grand finals section for info on the ultimate matchup.

Going into the quarterfinals, YoDa and Zest were not evenly matched. Zest sat comfortably at a within the top 16 of the global rankings, while YoDa was fighting for anything he could get. Zest had scored wins on YoDa’s fellow Terran Bunny (2-0) and Polt (2-1), in the group stage, proving, once again, that his PvT is more than on point.

After a Reaper opening from YoDa on map one, Merry Go Round, he was met with a Mothership Core. The fight eventually turned toward blink Stalker vs. Marines and gave 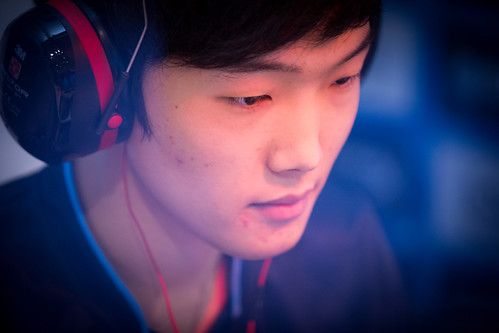 Zest a decisive first map victory. On King Sejong Station, YoDa went for a proxy starport and pushed out a Medivac and Widow Mine, for which Zest was fully prepared. The Protoss pushed it back, only losing two probes in the process. He grew a ‘network of pylons’ and shut down YoDa’s third, continuing to play with an extremely patient flavor. As Zest maxed out and completed storm he took the one engagement he needed at his opponent’s base and won the map. Finally, the two clashed on Overgrowth, where Zest built blink Stalkers and YoDa actually had a shot with his build. Zest readied himself for the long game and YoDa fell a bit behind in tech, despite getting +2 upgrades. He unfortunately waited until storm finished to push out, and that proved a fatal flaw. Zest moved into the semifinals with a clean sweep.

Semifinals can be just as serious 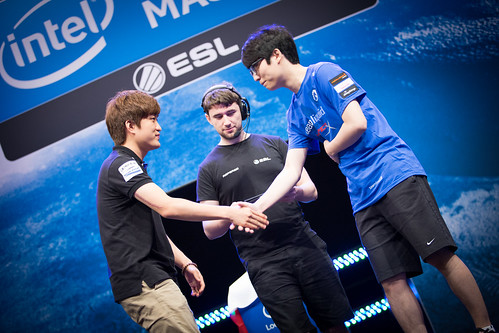 Taeja v. Flash might have been the most anticipated final of all – if it were a final. Instead, these two StarCraft II titans clashed in a semi-final that ultimately ended summer and gave us the first half of the KT finals matchup. TaeJa couldn’t have been ultra confident going into this fight. Yes, he beat Bunny yesterday, but his Detroit sweep by Polt was probably still churning up dust as he entered the arena against the infamous Flash on Nimbus.

On map one, TaeJa and Flash both opted for a more defensive style, with differentiation in the form of bio v. mech. TaeJa eventually ended the game with Tank/Hellbat play. On map two, the two Terran stared into the mirror – hard. After perpetually echoing each other’s builds, eventually Flash’s two Viking, three Auto-Turret attack on TaeJa’s command center and the subsequent loss of his natural gave Flash a much-needed GG.

Map three saw a similarly defensive Flash, who chose heavy hellion play to start, but the play spiraled into a late-game showdown that saw a ton of back and forth attacks and both players jockeying for position. By 33 minutes into the game, it was a sky Terran standoff, and Flash, powering off of a five-base economy, tentatively pushed forward. Then pulled back. Then pushed forward. Then pulled back. The crowd anticipated an engagement at any second and when it finally came, Flash took it all. The entire map was full of battle all game long in the highest level TvT we have the fortune to watch. It came down to match point on King Sejong Station where TaeJa made Vikings and Flash eventually stormed into TaeJa’s territory with a massive ball of Hellbats and Vikings where he killed 22 workers and took the lead that held until his impending win.

Flash credited his win to his high confidence in TvT macro and his belief that it’s all about composition. He noted that perhaps, TaeJa’s macro just wasn’t quite as godly.

The Zest of Life

Coming into Intel Extreme Masters, Life was ranked 9 in WCS points. The team StarTale Zerg was actually the replacement for the second open bracket player to drop out. But he arrived in Toronto and  went 11 and 1 in the tournament to meet Zest in the semi-final. (Just think, it might not have even happened at all.)

Because of Life’s noted rivalry with Flash and the very real potential for him to beat God in the finals, the pressure was high as the Zerg and his Protoss opponent took to King Sejong Station for their first map. 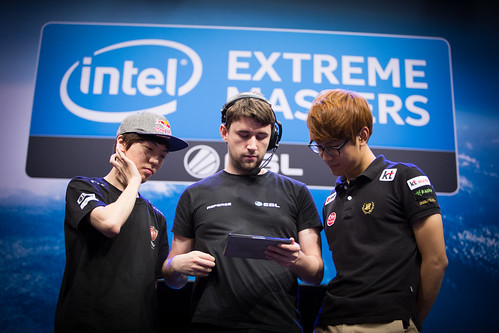 Life looked absolutely terrifying throughout the first map.He played patiently but aggressively, choosing to build Corruptors as a response to Zest’s Phoenixes, but when he ran into Colossi instead, Life was more than prepared, and he took the gg. On Merry Go Round, Zest had a bit more space to operate, and worked with it. He patiently allowed money to pour into the bank and landed massive storms which caused Life to bring in drones, losing them and destroying his economy. Here, he made the fatal mistake. At 36 army supply to 74, Life tried to take another fight without replenishing. On the Zerg’s last ditch effort, Zest ended the game with one swift storm. 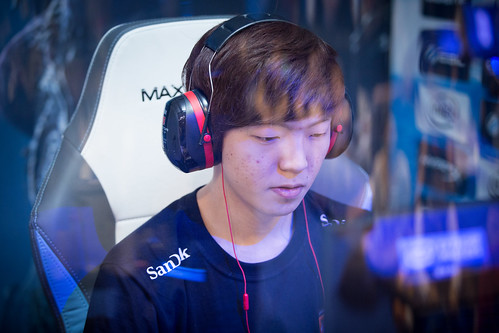 Map three found Zest standard forge fast expanding to start and Life moving quickly to take four bases. By the end of the game, nothing was standard. We had seen almost every Zerg and Protoss unit stream across the map at one time or another. First it was Vipers grabbing Colossi in big engagements, then Zealots charging the hatchery, then Lings and Hydras attacking while Zest worked toward storm, then Brood Lords, Tempests, a Mothership, Infestors, Ultras, Stalkers, a “sick ninja base” by Life and then finally finally, Zest finished off Life’s Corruptors and Brood Lords with a Void Ray/Archon/Colossus composition. You should definitely, definitely watch this game.

On Overgrowth, Life had his last chance to hold Zest off and stay in the tournament, but Zest quickly snuffed out that opportunity, playing with an out-of-the-Zest-box style that served him well. After slight back and forth trades, Zest began moving base to base with Stalkers. By the time his attack began in Life’s third base, Life should have turned tail and abandoned ship in favor of two base play – but didn’t. He exhausted his army and his economy and Zest moved on to the grand final.

Zest credited his win to his fortune of meeting Life often in ladder play. He said he didn’t put any extra time into studying the Zerg’s style – other than the times the two clashed in ladder games.

The Ultimate Weapon arrived in Toronto with no foreign SC2 tournaments under his belt, and in the semi-finals as the one player who truly needed the win. With a beautiful 4-1 victory over his teammate Zest, Flash was able to show the world that God is back, and, yes, that “there is no I in team.” 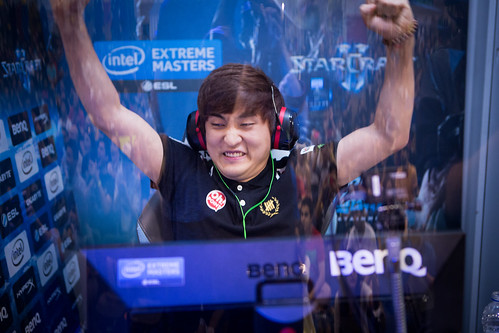 All maps are up for grabs in a best of seven, so we saw the two teammates start the battle on Catallena, which is so often vetoed in TvP matchups. Both played defensively, both scouted, both planned for a long game, and neither was especially eager to take large risks. After some back and forth Viking-Colossus play, Flash began to poke around the map for a third base that Zest hid well – and he found it as the crowd cheered. Flash brought in SCVs to target Immortals and Zealots and targeted the third base on the back of this success for the win.

King Sejong station was a slightly different story. After an absolutely amazing scout by Flash on a proxy Robo to the bottom left of his natural, the Terran player became a bit over-zealous and took a bad engagement for a two-Immortal trade. He began stim but was down in both supply and economy and as he was forced to pull all of his SCVs to protect his bunker, Zest moved in with Colossi. Flash canceled stim and the game ended.

After Flash’s one mistake of overconfidence he never looked back. In fact, he didn’t look anywhere. Flash took the next map, Merry Go Round, without scouting in Zest’s base, and set his course for the win. Zest played his standard twilight council/robo bay build and followed with Stalker attacks – and Flash knew exactly what was going to happen. Flash macroed up, never letting Zest touch his income, and took out three Colossi with his six Vikings to edge closer to the W. As Zest moved into the Terran’s main base with Stalkers, Flash ended it with bio and style.

Map four, Deadwing, allowed Flash to show off his macro style once again. As neither player began aggressively, Flash was able to build income and make intelligent scouting assessments. After spotting Zest’s gas with a scout, Flash moved in to slaughter 16 probes and leave the Protoss’s economy in shambles. Then the drops began. While Zest had a small army including a Colossus, a Sentry, an Immortal and four Stalkers, Flash dropped right on top of him, toppling the Colossus. He continued to drop at strategic intervals, and eventually, the drops turned into one long tirade as Zest attempted to land storms and hold Flash’s army off.  Finally the heat broke, but only in order for Flash to add to his army. As he arrived with Ghosts and EMPs, Zest must have known it was his demise. EMP after EMP from Flash sapped the poor Protoss of all his opportunity, and he was forced to gg. 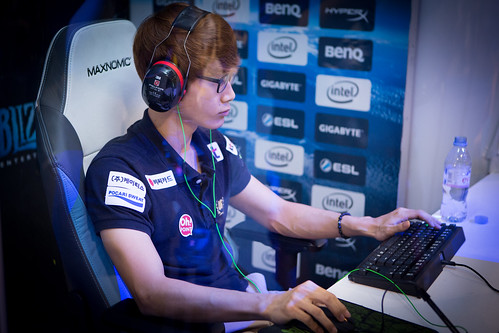 Get all the money, build all the things, win all the games

The brilliance of Flash was nowhere more obvious in Toronto than it was on map five. Taking a funky little expansion on the left side of the map, Flash remained hidden for long enough to seal his win. Zest must have assumed that, given the timing of Flash’s Reaper and lack of starport, Flash had a third base – but just as this thought seemed to come to light Flash threw down a real fourth as a decoy third, throwing Zest off his trail.

The game wore on. Finally, Zest took a third base and found Flash’s with a Zealot, working to destroy it. Killing the Zealot and holding, Flash scanned relentlessly and saw that, with a 35 army supply lead, it was his time to move out. He added Ghosts to his army and went on the march, surrounding the main, dominating the nexus in the natural and adding six barracks behind the push. His economy was out of this world at 2,200 minerals per minute and he continued to move in on Zest’s bases with 2/2 upgrades, even as the Protoss held by throwing down storms again and again. Flash charged into the natural, then the fourth base and as Zest’s final storm missed its mark, the game ended.

Flash threw down his headphones and put his hands in the air. He had won a StarCraft II tournament at last. 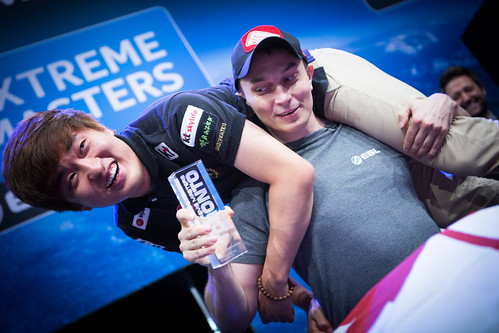 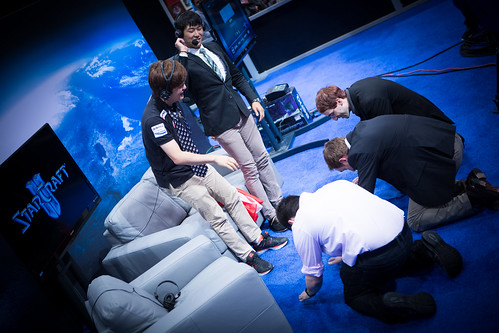 Did you get to watch this weekend? If not, check out the VODs here, and don’t forget to look into your Fantasy league stats now! You can also find more great photos of the event on our Flickr account.

You can also check out our recaps for the previous days here: