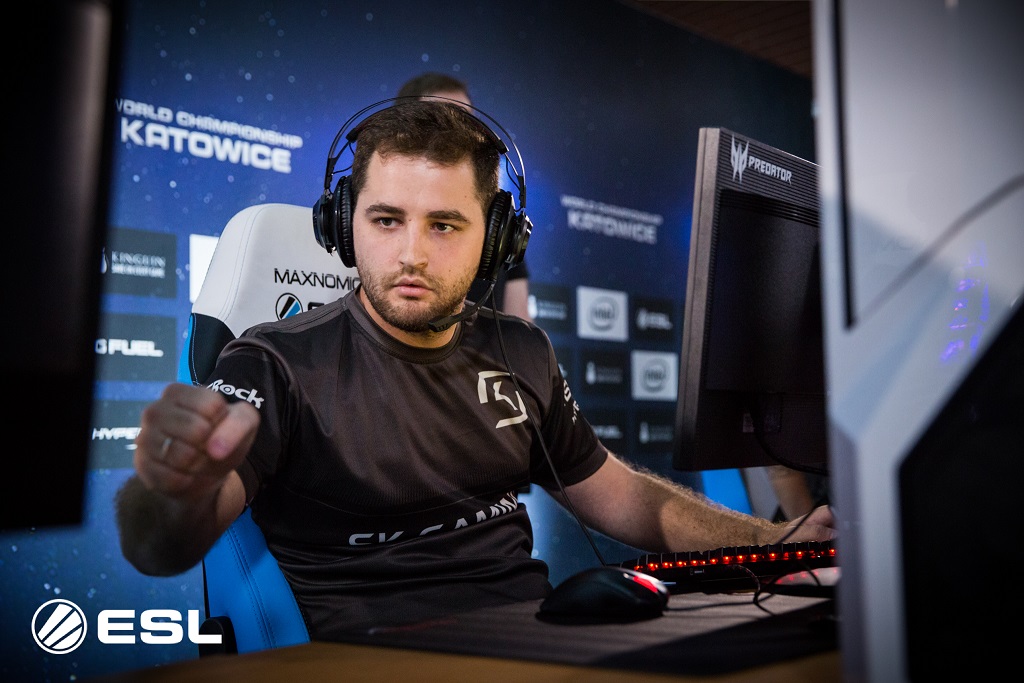 After an intense week of action at IEM Katowice, there was no surprise that the same type of action transcended into week three of the ESL Pro League. This week, across both Europe and North America, there were a number of key matches that had the potential to drastically change the region’s standings, as well as a team’s season, and their overall chance of qualifying for the LAN finals in Dallas, Texas later this year.

In this week’s recap, you can find a roundup of the standings for each region, the best highlights from the three days of action, and a look back at the Hot Matches of the Week.

At the end of Week 3 of the ESL Pro League, mousesports remains at the top of the European standings with 21 points after eight matches played, leaving them with a 7-1 win/loss record. It’s great to see this side continuing to show that the loss of Nikola “NiKo” Kovač has not affected their results.

Now three weeks into the ten week playing season, the European region is beginning to really heat up with seven of the 14 teams on 12 points. As we get closer to the halfway point, it will be interesting to see where each team is sitting as we could begin to get a solid indication as to which teams we will be seeing in Texas, and which big names will be watching from home.

Below, you can find an updated look at the European ESL Pro League Season 5 standings at the end of week three. 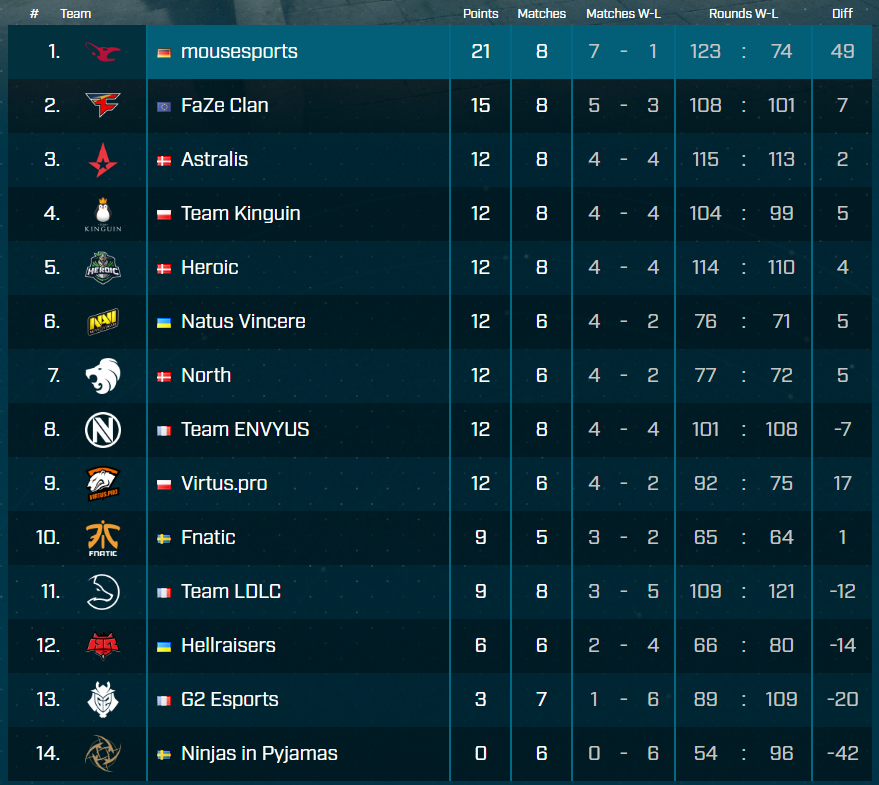 Before we got underway with this week of action, we recommended that you should be tuning into the grudge match between Virtus.pro and Astralis for a repeat of the grand finals at the ELEAGUE Major 2017, and the semi finals at DreamHack Masters Las Vegas.

Unfortunately for Astralis, Nicolai “dev1ce” Reedtz was diagnosed with Hiatus Hernia so was unable to play on the night, but the match still went ahead as the sides coach, and former CS 1.6 professional, Danny “zonic” Sørensen, stood in. The two-map series began on de_inferno where the Polish veterans, Virtus.pro, took a demanding, and pretty much unrecoverable, lead going into the half as they led 13-2. As the second half began, there was no doubt that VP would come it victorious, but it wasn’t before Astralis managed to pile together a number of rounds. The map eventually concluded 16-8.

Although the second map in the series, de_nuke, concluded with the same result, it took a very different path to get to that point. The Danish side got off to strong start as they took the pistol round over VP, eventually turning into a nice 10-5 lead at the halfway point. Unfortunately, their five point lead quickly slipped away with a second half pistol round loss, and Astralis then found themselves battling as hard as they could to get the three points.

Despite their best efforts, it just wasn’t enough against the Virtus Plow as they clawed back, and took the game to overtime where they didn’t provide Astralis with any room to breathe. After four quick rounds, the match concluded 19-15, and Virtus.pro took the final three points from the series.

In their search for their first set of points of the ESL Pro League season, G2’s Richard “shox” Papillon pulls off this piece of magic to put his side on map point.

In what was a must win round against Team LDLC, Fnatic found themselves in a 2v4 situation that seemed almost impossible to win. However, Fnatic’s saviours, Freddy “KRIMZ” Johansson, and Robin “flusha” Rönnquist, came to the rescue and won the round. The Swedish veterans went onto take the map 16-13.

At IEM Katowice, we saw Nikola “NiKo” Kovač constantly ripping enemies heads off with Desert Eagle, and winning rounds that just shouldn’t be won. This time around, he’s doing it with the USP-S.

In the North American standings at the end of Week 3, SK Gaming have climbed back up to the top of the leaderboard, overtaking Cloud9, after winning both maps from their match against Luminosity. The leaders currently sit at a total of 24 points, putting together a flawless 8-0 win/loss record.

Although there isn’t seven teams on the same amount of points like in the European standings, things are still getting to get tight in, and around, the qualification zone. With their 2-0 win over OpTic Gaming, NRG Esports have pushed themselves into fourth place, only six points behind the league leaders. This week, we also saw Renegades, Rush, and Winterfox, acquiring their first wins for the ESL Pro League.

Below, you can find an updated look at the North American ESL Pro League Season 5 standings at the end of week three. 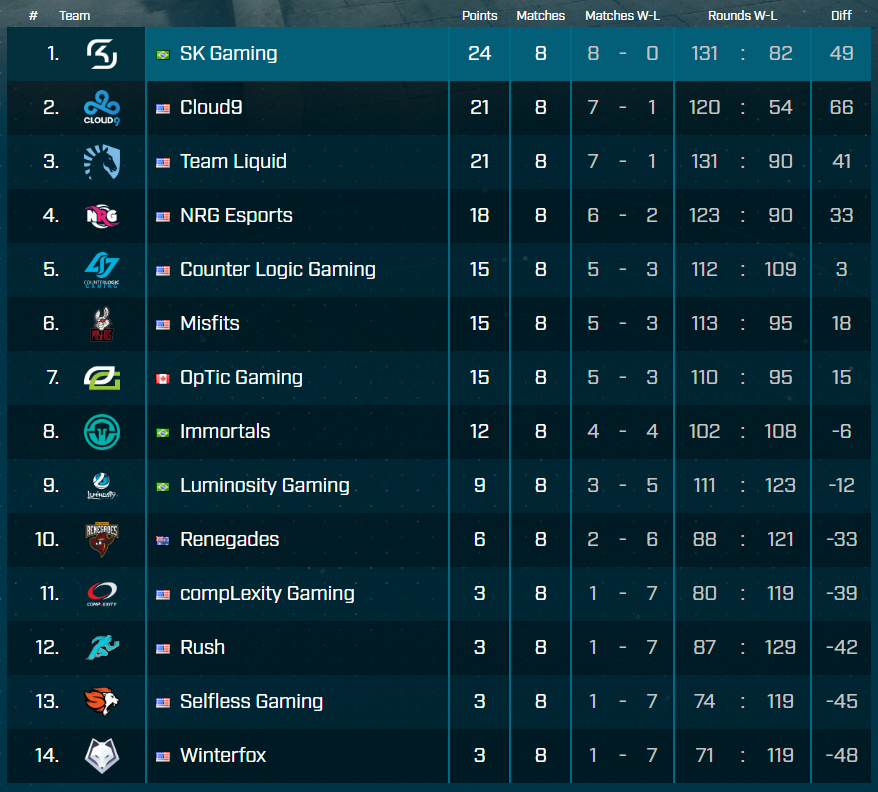 In our North American preview of Week 2, we recommended that you should be taking a look at the match between the NA ‘Kings of ESL Pro League,’ Cloud9, and Brazilian side, Immortals, who now seem to be performing well with the former SK Gaming player, Lincoln “fnx” Lau. In the first map, de_train, Cloud9 got off to a great start as they found themselves with a 6-0 lead over their opponents. By the end of the half, however, Immortals did managed to fight back and only trail 8-7, giving themselves a solid chance at taking three points. Unfortunately for the Brazilians, their first round efforts were not good enough as C9 dominated the second half, and quickly took the first map 16-9.

On the second map, de_cbble, the two sides seemed to switch roles from Train as it was Immortals that started out with a 5-0 lead before Cloud9 managed to earn their first in the sixth round. C9 slowly started to put together a few rounds in a row, however, Immortals just managed to hold on, and at the end of the half, they led 8-7. Winning the second half pistol round, IMT put themselves in a position to close out the map and take three points from the two maps. With the utilisation of top level team tactics, and positioning, the Brazilian side took the map 16-8.

We’ve already shown this, but we just have to show it off again. The Immortals new recruit, Lincoln “fnx” Lau, rips off the heads of Cloud9 in a match that they went onto win.

Something a bit different

As the SelflessGG side trailed with Team Liquid on match point, they decided to pull something that was beyond unorthodox to see if they could begin to rally back. Catching the Liquid side off guard, the strategy did work, but there wasn’t enough momentum to get the rest of the rounds back.

Some unusual play gives @selflessGG a round! Can they rally to tie things up? #ESLProLeague pic.twitter.com/2p1efcCkdp

After taking the first map in the series, de_cache, 16-9, NRG looked like they weren’t going to take their foot off the gas as the continued to dominate OpTic Gaming.

We’ll be back in a few days!

This week, there is no break form the ESL Pro League so we will be back on Tuesday with our preview of what is to come from the week, and of course, more great CS:GO matches.