Tears and fears: a year of LCS 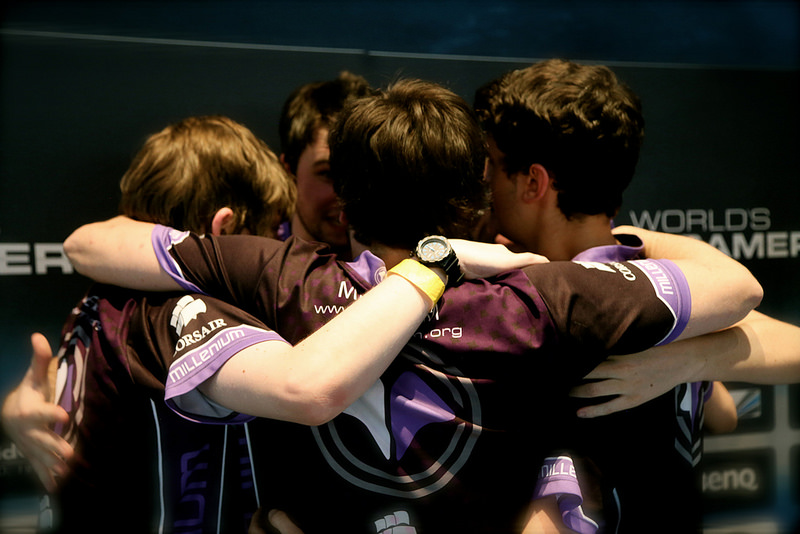 One year ago, the North American and European League Championship Series (NALCS and EULCS respectively) started their first split, marking the beginning of Riot Games’ storming the eSports scene and creating a means for professional League of Legends teams to compete in financially secure circumstances. Looking back over the year, what have we seen and how has the LCS developed?

In the past twelve months, we have seen fifteen different organizations participate in the EULCS. Three of those, SK Gaming, Fnatic and Gambit Gaming, have taken part in every split thus far. It is noteworthy that out of these teams, only Gambit Gaming has the same lineup it had one year ago. Two teams, Copenhagen Wolves and Evil Geniuses, have managed to be an EULCS contestant twice. The previous split’s Team Alternate now plays under the Millenium banner. It deserves mention that Evil Geniuses, throughout their two splits, maintained the same lineup in the EULCS, which is now split amongst the Evil Geniuses team in the North American LCS and Alliance in the EU. Meanwhile, in North America, teams have proven themselves more consistent in making it back into the LCS. Throughout the three splits, no less than six teams have participated in all of them and one team, Cloud 9, in two. Two of these teams (Good Game University and XDG Gaming) competed under different organizations but with a nigh unchanged roster. On that topic: of all the seven recurring teams, five of them still have at least three members of their original lineup in place.

Although the first split was characterized by clearly defined performance rates, with Gambit and Fnatic maintaining a steady lead throughout the season and GIANTS! and Dragonborns struggling, the second split was an exciting race that ended in a three-way tie between Evil Geniuses, Gambit Gaming and Ninjas in Pyjamas. For the latter, the tie-breaker would lead to relegation and being knocked out of the LCS altogether by now-ROCCAT. The second split raised questions about whether the close finish was a sign of inconsistency rather than an overall high level of skill, what with teams bouncing up and down the standings throughout the split and the week 5 standings not even coming close to resembling the end-of-season results. Across the Atlantic, the competition was slightly more stable but still had spectators wondering how the standings would conclude. Although somewhat less defined than in the EU, the first split results gave a very smooth win-loss ratio spread, each team having marginally worse results than their immediate leading opponent. The second split would be similar to the EU’s first one, with Cloud 9 and then-Vulcun (now XDG) having a steady lead throughout the season and Coast and Velocity trailing behind.

New kids on the block

During the summer promotion series of last year, three out of four relegated teams were knocked out of the LCS, with Dragonborns, GIANTS! and Against All Authority clearing the way for Meet Your Makers, Alternate and Sinners Never Sleep (who were consequently picked up by Lemondogs). In the last promotion series, we yet again saw three LCS teams leave the stage. Meet Your Makers and Ninjas in Pyjamas were crushed in four and three games, respectively. Lemondogs, on the other hand, was disqualified due to lineup issues. SK Gaming would be the only one to triumph in what would be an nail-bitingly close 3-2 set against SUPA HOT CREW XD (who would go on to be victorious in the Play-in tournament, thus obtaining an LCS spot anyway). In last season’s summer promotion series, two out of four LCS teams, CompLexity and MRN, were sent home by prospective challengers Quantic (now Cloud 9) and Velocity. Season 4’s spring split had both Curse and Coast successfully defending their spots, and Velocity-turned-Evil-Geniuses’ new lineup defending theirs. Thus, Evil Geniuses would be the only new team to enter the NALCS, despite high expectations of challenger teams COGnitive, To Be Determined and The Walking Zed.

With all that the LCS offers, teams have had the means to do what is necessary to raise the western standards of eSports. The buzz around Team Solo Mid being the first to take the step to start a gaming house little more than a year ago seems like something from far in the past as last year saw the formation of gaming houses became commonplace.
Moreover, teams have started hiring analysts and coaches in order to keep up with the theory. Where teams used to spend valuable time watching their matches and those of others, nowadays there are people taking over this work in order to allow players to allow more time for actual practice. This may be a sign that Riot’s aggressive eSports promotion has been working out. With the Coke League being an acceptable substitute division, there is less risk for an aspiring LCS team to invest all that is necessary to rise to the top, boosting the average level of play and creating a bigger frame of competition for everyone willing to put their mind to eSports in the process, from the top all the way to the bottom.
Today, regular LCS matches pull over 300,000 concurrent viewers, as opposed to the 150,000 they used to attract during the first split, one year ago.