“Prove to the world that EU > NA”: an interview with ROCCAT’s Marcin “Jankos” Jankowski

During 2014, ROCCAT has made a huge impact on the EU LCS. After a third place finish in the Spring Split Playoffs, the team once again advanced to the playoffs but lost their spot at Worlds to SK Gaming. For IEM Cologne, the team has big goals and will get to present their squad with some roster changes, as well as team captain Overpow moving from mid to top lane. We spoke to Marcin “Jankos” Jankowski​ about the event and the challenges ahead at this last tournament of 2014.

ESL: Hi, Jankos, and thanks for taking the time to speak with us about Intel Extreme Masters Cologne. You are replacing Fnatic in the tournament – do you think you’re able to fill their spot?
Marcin “Jankos” Jankowski: Hello there. I am really excited for being able to play at IEM and compete internationally. Replacing Fnatic is a challenge but we are eager to show that we can be even better than what we were last split.

ESL: During the Summer Split you missed the chance to be part of Worlds after dropping the third place decider to SK. How sad are you about missing this chance and is taking a spot at Worlds your main goal in 2015?
Jankos: I was quite sad after the matches versus SK, especially after being so close to winning versus Fnatic. We felt like we deserved to go to Worlds, but sadly SK were better than us at that point. But now I have no regrets, we are looking only forward and how we can be better and don’t miss our next chance!

ESL: Both Xaxus and Celaver left the team after the Summer Split. Can you talk a bit about the reasons as well as the players who took their places?
Jankos: It was sad to lose two people that we’ve played and lived with for so long, but we felt like we have reached our potential with the current lineup and our only option to improve was bringing fresh blood into the lineup. Woolite was Rookie of the Season, which is pretty much enough said as to why he was the one taking up the spot, and Overpow is just overall an amazing player that can adapt to every role quite easily and we felt like he is the right option for our top lane. 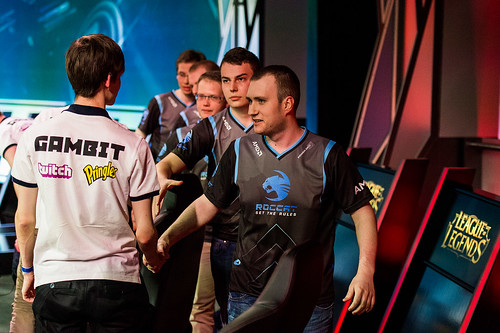 ROCCAT on stage at Wembley

ESL: With Overpow moving on to top lane, your team effectively needs to adapt to three new laners in a gameplay sense. Can you tell us a little about how you work with these intense changes?
Jankos: Well for one we started preparing way earlier than last year. Also we have a new coach, with a new way of preparation which helps us a lot. Also this time we are quite dedicated to prove ourselves so we are tryharding way more than what we used to.

ESL: In Cologne you’ll get the chance to play Gambit, Dignitas, CLG, Moscow 5 and Aces High. What are your goals fighting these top teams with your new roster?
Jankos: I am looking forward to playing versus all international teams. But I am really excited to finally have the chance to compete versus the NA teams – you know we have to prove to the world that EU > NA.

ESL: With both Gambit and Moscow 5, this is somewhat of a fight for the position of the best Eastern European team. Who do you see having an advantage in Cologne?
Jankos: It is going interesting to see those two clash, especially with Gambit being ex-Moscow 5. But definitely Gambit has the advantage out of the two, because of their years and years of experience.

ESL: For Intel Extreme Masters Cologne you’re going back to the ESL studios, the place where the EU LCS started. What kind of memories do you have about the studios and what will you miss in Berlin next year?
Jankos: Well I haven’t really had the chance to play in the ESL Studio yet, but I am really excited to play at the place where EU LCS started. I am going to miss Cologne a bit since its where my career actually started and I’ll always remember the city with that. 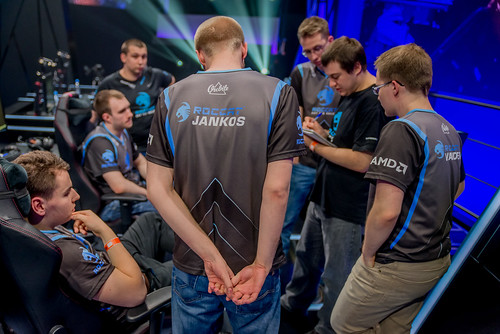 Jankos and his team on stage at gamescom

ESL: You’re getting a shot at competing with NA LCS teams. How much are you looking forward to playing both Dignitas and CLG?
Jankos: Like I said a bit earlier I am super excited to play the big names, the old school teams. Plus I believe both Dignitas and CLG are teams that can represent NA quite well so it is a good chance for me and my team to show that EU is better than NA!

ESL: With Moscow 5 and Aces High, there are two lesser known teams in the tournament. What have you heard about them and could they become a real challenge for your team?
Jankos: I don’t think they can win the event, but that doesn’t mean they can’t do damage on the teams. We are definitely not going to underestimate them, and we will play versus them as we will play versus CLG or Gambit and such. We don’t want to see another KaBuM story you know 😉

ESL: Thank you for your time! Anything else you’d like to add or shoutouts you’d like to make?
Jankos: I want to thank ROCCAT for supporting us. Also thanks to all the people that supported us and helped us take part in the event! And last thanks to all my friends and family for being so supportive of my career.

Intel Extreme Masters Cologne will take place next week from Thursday the 18th of December to Sunday the 21st of December and will bring you some great League of Legends action. Stay tuned for more pre-coverage as we get closer to the event and grab your tickets while they last!