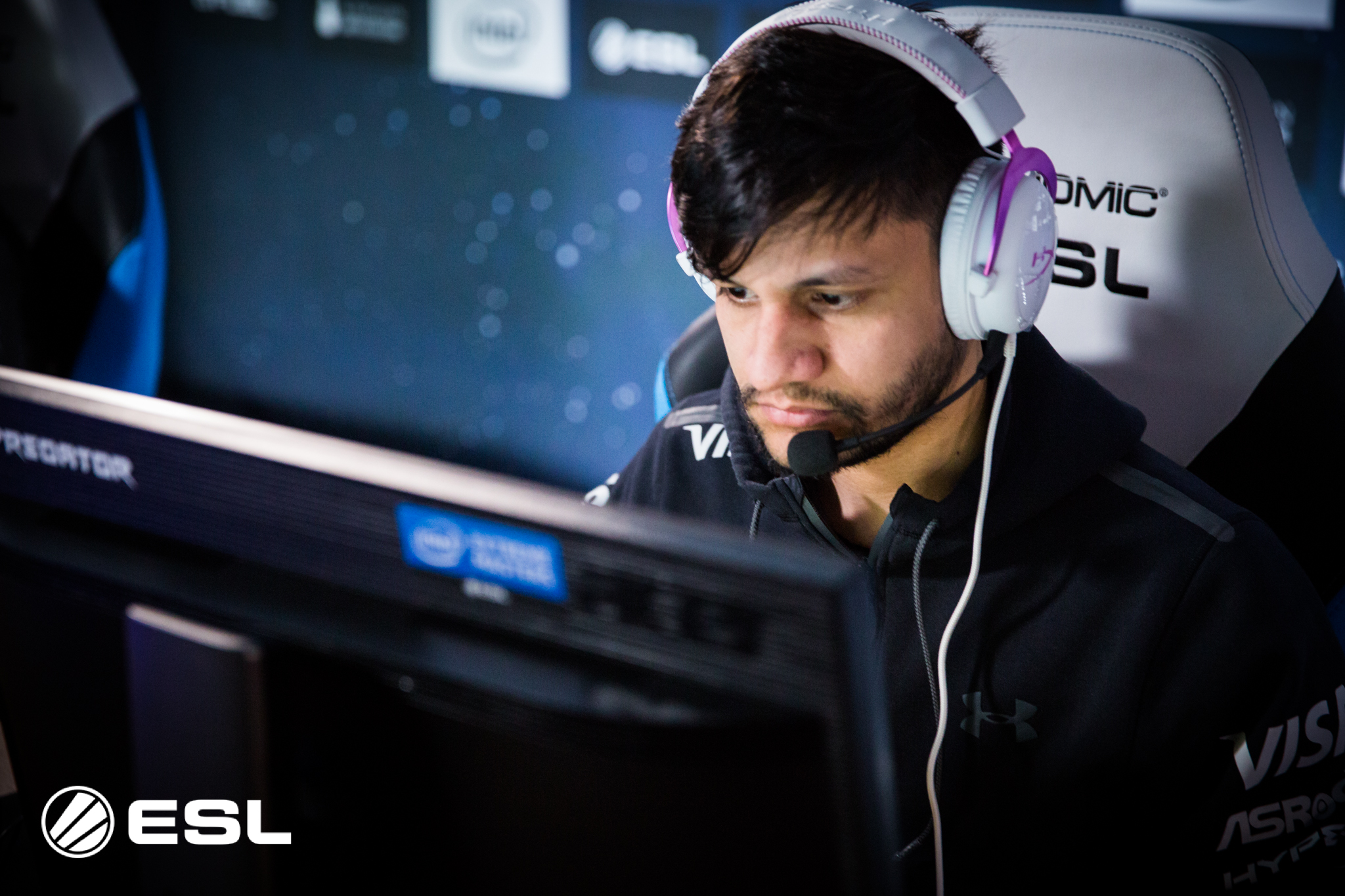 As we hit the halfway mark of the ESL Pro League, and gradually get closer to knowing which teams will be competing in the offline finals, there was no surprise as to the type of matches that were being featured throughout this week of play. Some of those big matches included a battle between Swedish giants, Ninjas in Pyjamas and Fnatic, whilst across the pond in North America, it featured a match between Counter Logic Gaming and Team Liquid.

In this week’s recap, you will find an in-depth roundup of the standings from Europe and North America, the best bits from the week of gameplay, and also a look back at our two Hot Matches of the Week.

After a number of weeks at the top of the European standings, mousesports have finally been dethroned by Danish side, North, after obtaining a total of 30 points from 14 matches played, leaving them with a 10-4 win/loss record in the Pro League. Granted, North has played two more matches than the mouz lineup.

Although North are leading in Europe, it is still all to play for with the rest of the leaderboard beginning to make a charge for the top section of the standings. The last team in the qualification zone, HellRaisers, currently sits at 21 points, but behind them, there is six teams that are only six points behind. Anything could happen in the second half of the season.

It’s worth noting that, alongside those six teams, is Ninjas in Pyjamas, a side that struggled early on in the ESL Pro League Season 5. However,  with the addition of William “draken” Sundin, the Swedish lineup have started to get back to their old ways, and have now moved up to ninth place with 18 points.

Below, you can find an updated look at the European ESL Pro League Season 5 standings at the end of week five. 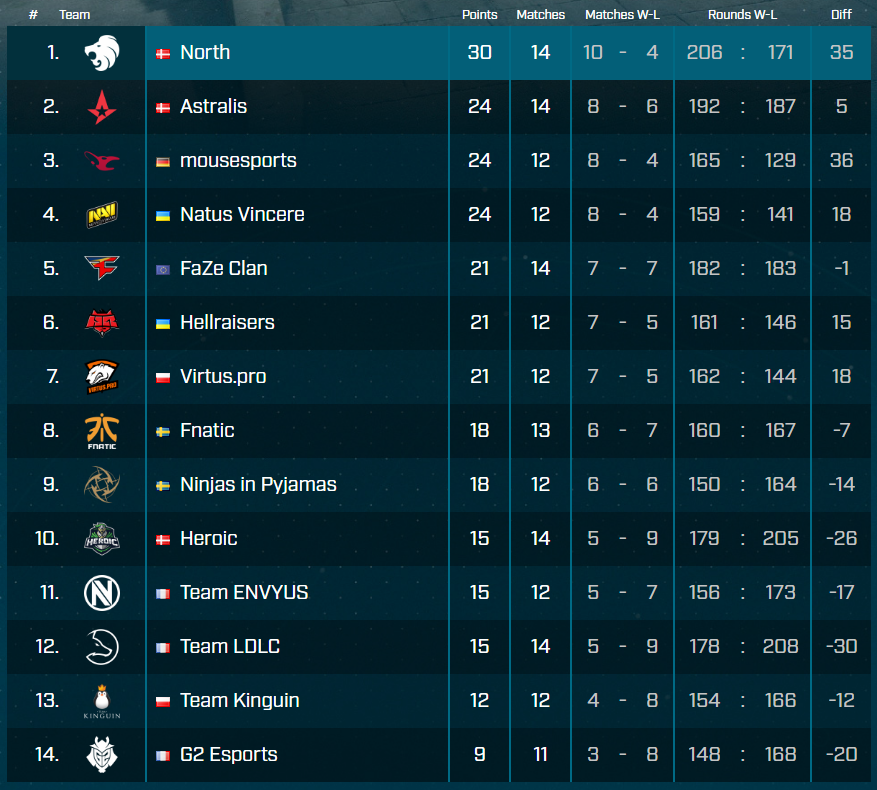 In our weekly preview of the action to come, it was our recommendation that, if you could only watch one series this week, it should be the clash between fourth place FaZe, and the major champions, Astralis.

On the first map, de_inferno, FaZe got off to a dominating start as they took a 5-0 lead over Astralis before they acquired their first round win in the sixth round of the map. However, the match quickly flipped on its head, and the momentum switched, as Astralis started to become aware of what the Counter Terrorist side was doing. The Danes awareness of how FaZe were playing the match allowed them to take a one round lead going into the second half at 8-7.

Throughout the second half, a similar story occurred as Astralis swiftly found themselves in a situation where they were only two round away from winning a map that initially looked unlikely. However, FaZe did what the Danes did in the first half, and managed to pull it back to 15-14 before Astralis closed it out, and took the three points.

At the conclusion of the first map, people started predicting that there would be a similar outcome to the previous map on de_nuke, but it turned out to be slightly different. The match started out with an early 2-0 Astralis lead, but the Danish lineup lost the first gun round of the map. This allowed the FaZe team to gain some momentum and took a 5-2 lead over the number one team in the world. Regardless of that change in pace, it was Astralis that took the lead after the first half, 8-7.

The second half got underway and the mixed European side of FaZe took immediate control of the situation, tying up the map 8-8. Unfortunately for Astralis, they couldn’t seem to get anything to work on the Terrorist side and FaZe took full advantage of that, closing down every attack, and keeping control of key areas throughout the map. After a streak of rounds won, the FaZe lineup took the final map in the series 16-9, adding another three points to their position in the leaderboard.

After another week of play, there is no surprise that Brazilian side, SK Gaming, remains at the top of the North American standings with 36 points, extending their flawless win/loss record to 12-0. It is truly amazing to see how this lineup has developed into the type of side that they were throughout the whole of 2016 after the replacement of Lincoln “fnx” Lau with João “felps” Vasconcellos. I’m also beginning to wonder if they will be able to go the whole online qualification eason without losing a single match – that would be incredible.

Much like the European standings, although SK Gaming have a lead in North America, there is a number of teams that are making a charge for the number two spot, or just a position in the qualification zone altogether. In reality, Renegades, who sit in 10th place with 15 points after 11 matches, still have a chance of qualifying as the last team in the qualifications zone, first through sixth, is Counter Logic Gaming, and they are only sitting six points ahead Renegades. Anything could happen.

In terms of the bottom four, compLexity Gaming, Rush, Winterfox, and Selfless Gaming, the battle to remain in the ESL Pro League continues as after 14 matches played each, the four sides have only managed to obtain a combined total of 27 points. At this level, those results are not good enough, and for those teams, I can almost guarantee that they will be going back to the drawing board in hopes of finding something that will get them to the top tier of CS:GO.

Below, you can find an updated version of the North American ESL Pro League Season 5 standings as the fifth week of matches concludes. 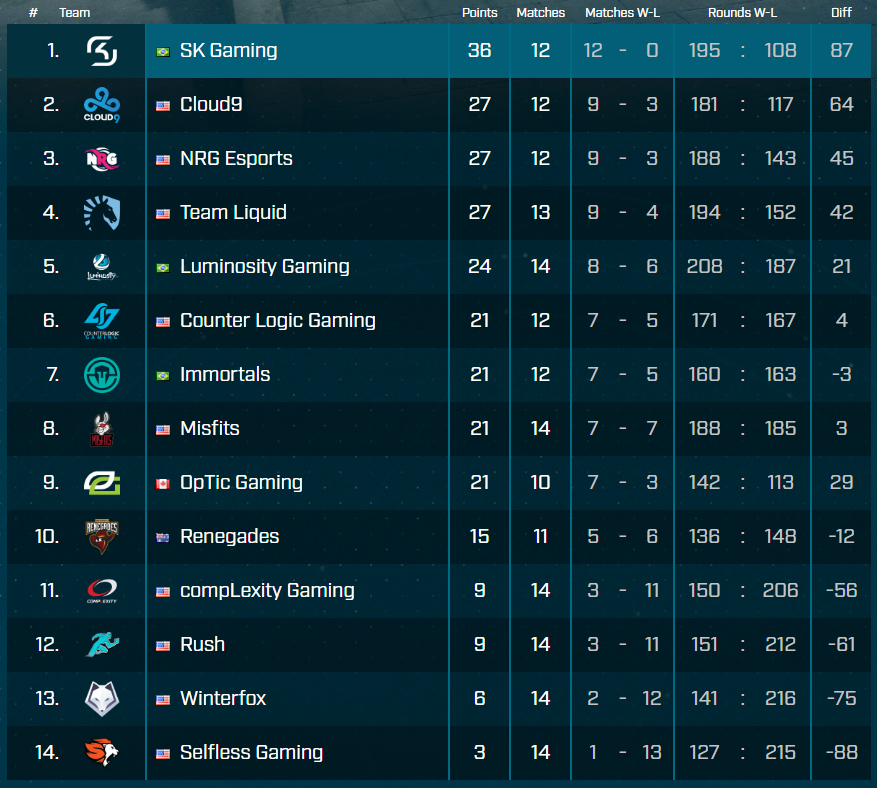 In our North American preview of Week 5, we recommended that you tuned into a match between SK Gaming, a side yet to lose a match in the ESL Pro League, and Misfits, a side that continue to cause issues for some of the better sides throughout the North American region.

Before the match got underway, there was an expectation of SK Gaming taking the two-map series, but with some difficulties, if we take into consideration how Misfits had been playing. Let’s see how it played out. In the first map, SK Gaming dominated throughout with the opposing side only managing to win five rounds in the first half on the Counter Terrorists side. The teams switched sides, and SK Gaming continued to play as a cohesive unit, eventually taking the first map in the series 16-6.

The second match held pretty much the same storyline as the first with SK Gaming starting off strong, and not giving the Misfits side any room to work on the Terrorists side. As the two sides reached the halfway point, and switching sides, it was the Brazilians that were leading 11-4, without any signs of looking like they were going to stop.

At the start of the second half, it looked like Misfits had some life in them as Shahzeb “ShahZaM” Khan got four frags in the pistol, but was unable to get the defuse with a hiding Gabriel “FalleN” Toledo peaking out at the perfect time. Other than that, and a single round win, Misfits weren’t able to get anything together and SK Gaming closed out the second map 16-5, taking all six points available.

Up close and personal

With there not being a break from the ESL Pro League this week, we will return on Tuesday with our preview of what to expect from the week ahead, as well as more top matches from across Europe and North America as we head into the second half of the season.