It was just a few weeks ago when the cardslinging elite gathered in Burbank to find their king. In sunny California, the shining star was SilentStorm, a previously lesser known gem of the Hearthstone competitive circle. The tournament served as a springboard for him and several other stars, showcasing their fierce skill and perseverance in the face of the toughest competition.

The ESL Legendary Series Season 1 gave us plenty of memorable moments, like three Kel’Thuzads emerging out of Sneed’s Old Shredder, as well as a peek deeper into the competitive Hearthstone talent pool. Names like SilentStorm, Zalae, Pinpinho and Weifu became known, with them battling against some of the biggest names in the scene. Now it’s all about to start again, with a different format, more action and plenty of new talent to discover.

Alongside new and fresh talent, the invited players will feature yet again, but this time they will be outnumbered. In the previous season, almost half of the participants were players invited on merit of their accomplishments in the Hearthstone scene. However, as the scene evolved and tournament organizers adapted to the wishes of the community, the ESL Legendary Series has also changed. Now only two of the eight open slots will go to invited players, with six open cup challengers joining them instead.

Another change to the way the tournament is run is the update to its structure – the days of a one-day event deciding it all with a single elimination bracket are over. The ESL Legendary Series is expanding, giving viewers more action and players more games to showcase their skills. Every second Saturday and Sunday the Legendary Series will take place, with a group stage kicking off the festivities and a Championship Sunday to host the top six followed by the grand finals. The long road through the Challenger Cup is now also rewarded with at least three matches against the highest competition. 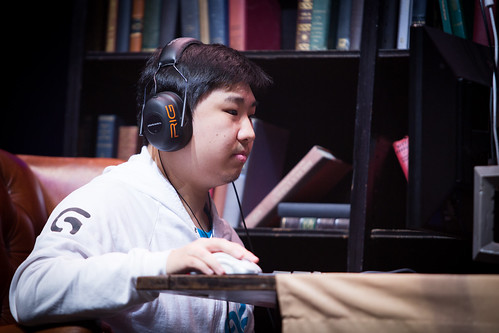 Despite all the changes in motion, the first invites have been given to some familiar faces. This time’s merit-based invitees are StrifeCro and Lifecoach, giving them a chance to strut their stuff in the new and improved Legendary Series.

Both players have been on top of the ladder, the GosuRankings and almost every competition they’ve entered for months. Ever since Hearthstone made its big debut on the competitive scene with Fight Night, StrifeCro has been around and revered as one of the strongest players in the game. His innovative attitude to deckbuilding and unorthodox approach to the game left some casters puzzled, but they ultimately stood out as game-winning. The former StarCraft II professional quickly became one of the most iconic figures in the Hearthstone scene, earning him a spot on the stacked Cloud 9 team and invites to pretty much any tournament he desires. For over six months, the exalted Druid player has been in the top five of the GosuRankings, which speaks volumes about his consistency against some of the best players in the world. Coming into the competition with the momentum from his undefeated record in the Kinguin Pro League, he will try to make up for his early exit in the ESL Legendary Series Katowice. The agony of not reaching the offline event is still palpable as the Cloud 9 superstar now sets his sights on the Season 2.

The second invitee, Lifecoach, does not have the luxury of looking back at almost a year of top results but he does have a reputation as one of the hottest players at the moment. Back in Katowice, he entered the competition undefeated in March. The loss to Nalguidan marked the end of his tournament run in Poland, while also being the only loss that month. Every other event was won by the German former poker professional, making it one of the most impressive runs in recent times. The Kinguin Charity Spring event and the Root Invitational both went his way in addition to two runner-up spots in Pinnacle 2 and Heroes of Cards.

As a result, Lifecoach has been looking at a stellar record of 19-3 since the 29th of January. The current meta seems to be perfect for him and his three stable decks: Mech Mage, Druid and Handlock. However, whether it’s predictable or not, the results speak for themselves.

The ESL Legendary Series didn’t only help showcase hidden talent last season – it also showed that there is good Hearthstone played outside of the scope of the mainstream. Several players from Taiwan made their presence known, battling through a tough schedule and time zone issues. Next to the international invites, these Asian players showed that Hearthstone truly is an internationally successful game.

The opening series of this season will reinforce this further. Despite there being only eight players competing, four continents and six different nations will be taking part. North America, Asia, Oceania and Europe will enter virtual arena, slugging it out for regional supremacy. The United States of America, playing on their home turf, will have the numbers advantage, with Azuzu and liimujx joining invited juggernaut StrifeCro to fight for the red, white and blue. Europe will be represented by Kaldi, the Fnatic player from Iceland, and invited German Nihilum star Lifecoach.

The strong Asian region will not have a Taiwanese challenger this time, but have online tournament veteran gcttirth from India and koroneko from Japan will be representing the biggest continent on Earth. Last but not least is competitor from Down Under BubSenpai. After the BlizzCon NA Regionals at the Hammerstein Ballroom, the presence of Australian cardslingers is well documented, with StUnNeR having made it out of the group stage and into a gripping match with StrifeCro for one of the BlizzCon World Championship seeds. Before this, the Australians were somewhat under the radar, but now they’re ready to shine – what better way of showing some Aussie pride than by winning the most international eight-man tournament in the world?

However, the road won’t be easy for the young Australian. His debut match in the ESL Legendary Series will be against fellow open qualifier player Azuzu, with them both having been placed in a group with StrifeCro and Kaldi. This clash between two known players, between Cloud 9 and Fnatic, will be one of Saturday’s highlights. Despite both players having been in the competitive scene for a while, the only recorded game between the two took place in the TakeTV Gentlemen Cup when Kaldi was still a member of vVv. Since then the Fnatic player has emerged as his team’s number one player, with some particularly strong outings in the Kinguin Pro League recently. StrifeCro, as the GosuRankings’ top player in the world, is still going in as the favorite, but he will have his work cut out for him in the opening bout as well as in the group.

In Group A, the clash of the two well-known titans isn’t going to happen right off the bat, with gcttirth having limujx as his first opponent while Lifecoach will be starting his tournament against Japanese player koroneko. However, the stage is set for the inevitable collision between one of the top online cup warriors in North America and one of the top players in the major tournament scene.

No matter what happens and who ends up playing who, make sure to tune in to Twitch.tv/esltv_hearthstone on Saturday and Sunday, when TJ “Azumoqt” Sanders will be lending his voice to the start of the second ESL Legendary Series season, alongside TempoStorm star George ‘Hyped’ Maganzini. For all the latest information about the ESL Legendary Series, head over to the official site, and be sure to check out our ESL Legendary Series Katowice infographic.