“If the community grows large enough, you will always have competitive players who want more”: Deman on Evolve 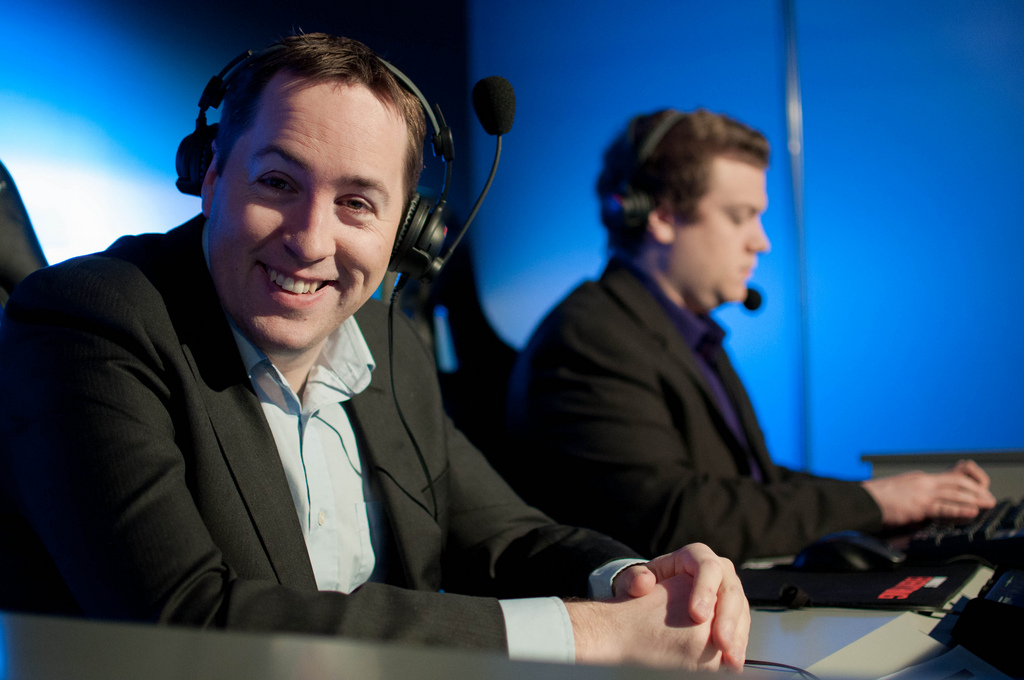 We officially announced that Leigh “Deman” Smith was joining the ESL team last Friday, and so we wasted no time in picking the vast gaming knowledge repository that is his brain. One of this week’s hot topics is Evolve, 2K’s massive hunters versus monster title and a game that Deman has first-hand experience with. So how did he find it?

ESL: Before you got a chance to the play the game, what were your first impressions of it?
Leigh “Deman” Smith: The first time I really saw Evolve outside the opening trailer was during their stream at E3, and you could tell it was going to be fun to play. They were running guest teams against each other and even in its very early stage with players that had never seen the game before, you could tell they were loving the teamwork aspect and the solo play of the monster.

ESL: Tell us about your experiences playing the game.
Deman: When I first played the game I was the trapper Griffin, so I quickly learned that it was my job to not only track the monster down but capture it in the mobile arena, which is a big dome-like force field. Instantly I felt pressure on me from my team to not screw up and misplace the arena else the monster would escape and possibly get clear to eat and evolve. Then when you finally land the arena and shout “I got him!” you realize: oh damn, he’s huge – run!

ESL: Did you play Left 4 Dead before getting into Evolve? If yes, do you think it informed the way you played Evolve?
Deman: I played Left 4 Dead mainly in LAN environments back in England when I attended Mulitplay’s StratLANs (Small events of around 100 people). There would always be a ‘game of LAN’ and I remember that being one many times – I still remember those shouts of “BOOMER!” It had a similar kind of tension for the team fighting off masses of zombies, and just like in L4D you need to be a tight group and stick together to have any chance at taking down the monster. The trapper can roam a little but the group has to be nearby!

ESL: Monster or hunter – which do you prefer? Which specific monster or class have you claimed as your own?
Deman: I really enjoyed the four player aspect during the Alpha – a group of friends on comms working as a team to take down the monster. If the monster player was good, it really became a challenge if you didn’t get any damage on them early. I tried out all classes and really enjoyed the support and trapper. It’s funny seeing people not want to pick support due to the word’s connotations before they realise the class kicks ass and does so much damage!

The thing is, though, I also really enjoyed playing as the monster because it’s so tense – you always feel like the hunters are close by even though your detection skill is not showing them on the minimap. Once you get clear and manage to hit that third evolution, it’s just so satisfying to sneak up on a straggler and pick them off so fast then destroy them all as they realize what just happened!

ESL: What’s your opinion of the game’s balance as of right now? Do you think one side currently have the balance tipped in their favor?
Deman: From what I played in the Alpha, it certainly seemed to be fairly well balanced already. Don’t get me wrong – if you watched my stream when I played as our hunter team, we were close to a 100% win rate, but that’s because we were often facing level one or two players as the monster who had no clue what to do.

If we came up against a level 10+ who’d got experience then killing the monster became a whole lot harder and often ended in a fully evolved level three battle to the death defending the final objective. And that’s the thing: these were by far the best games we played in Evolve – the close battles.

Then when there wasn’t enough for a full four-man team and we had to pub stomp it, things became a lot harder as hunters without real communication. It was the same when playing as a monster – I never lost because I’d played so many hunter games by then that I figured out when to run, when to attack and when to stay the hell away!

ESL: Looking at the currently revealed characters, can you single out anyone as an instant pick?
Deman: I really like the way the game is going currently, seeing all the new revealed hunters and monsters. It’s great to see such different playstyles required in the monsters for the Goliath and the Kraken – I can’t wait to see what’s next.

I think my current favourite hunter is Hank, the first support champion: he does great damage, has this awesome missile barrage AOE that can be used from long range and a shield you can put onto your teammates to prevent focused damage. So he’s really versatile and offers a lot to the team.

ESL: Do you have a favorite monster from popular culture you’d like to see in the game?
Deman: Let’s face it, who wouldn’t want to play Godzilla?!

ESL: How long do you think you’d last if you were a hunter in the Evolve universe?
Deman: Hah! Probably not very long if you were to believe my teammates! I did tend to wander off alone a few too many times as the trapper then either be too far from the action to get the arena down or too far away on my own and end up being eaten by some wildlife!

ESL: What are your thoughts on Evolve’s competitive esports potential?
Deman: Honestly it’s very hard to predict any game’s esports potential. However, Evolve has the storyline aspects there to be successful. The tension is already visibly there, and you have the good guy versus bad guy vibe already from the hunters versus monster. Finally, if the community grows large enough, you will always have competitive players who want more.

ESL: Can you see yourself commentating Evolve games in the future?
Deman: Yes it’s certainly possible. Fun games to play are always great games to cast – without enjoying the game in the first place, what’s the point?!

ESL: What excites you most about the game’s upcoming release?
Deman: Seeing how it develops from here. Evolve is a pretty unique game which is fantastic for me as an old gamer in a world where the next game title just has another number slapped on the end. Evolve is something new and refreshing which gives the developers a lot of freedom when it comes to creating new updates for the game.

Want to find out more about the game? Check out some of our previous Evolve coverage below: