How To Learn A Tekken Character 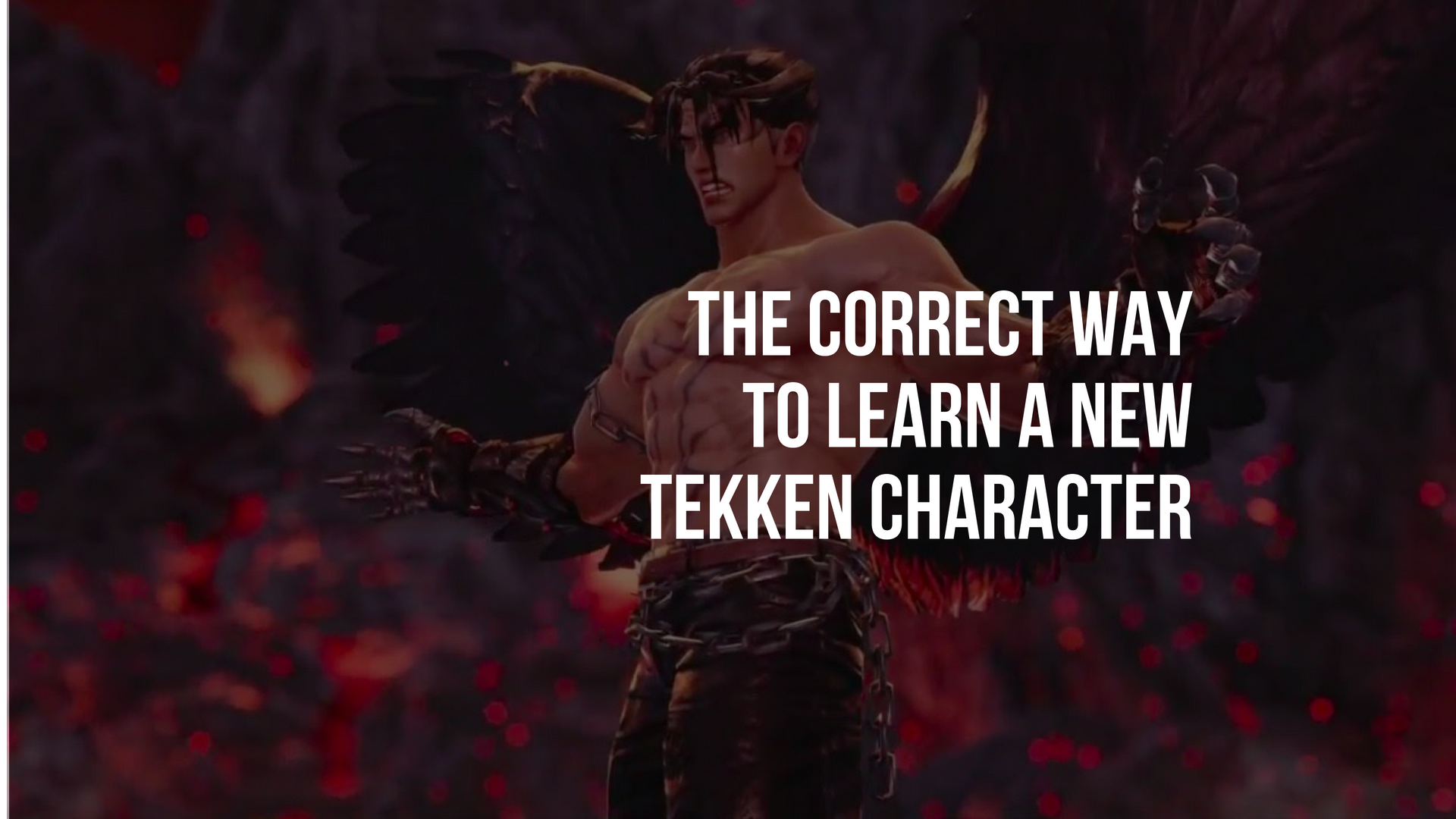 When learning a new character in Tekken you will most likely be faced with a plethora of different obstacles and reasons why you shouldn’t. This handy guide will alleviate some of that unnecessary pressure and help you learn a character in the right way. We have also thought of players who simply want to have and included in this guide is the stopping point as well as the extra steps that are required to take a character to the next level.

The first immediate decision that needs to be made is deciding which character you want to learn. You need to bear in mind that different characters have different skill ceilings and entry points. More technical characters like Hwoarang, Ling, Yoshimitsu and Leo will take a lot longer to use effectively. This is partly due to some of their moves being locked behind stances and also because understanding the correct time to use the stances takes experience as well as practice.

The most important factor that needs to be considered when picking up a character is the enjoyment you feel when playing them. Deciding on a character based on a theoretical tier list can sometimes be counter productive, especially in Tekken. Let’s take the example of Mishimas in a tier list, they are usually always near the top end of the list. The main difficulty when using Mishimas would be the incredibly technical base that is required to master movement and the fundamentals of Tekken to use them effectively. This does not always deliver the results users wish, as it can take a lengthy amount of time before worthwhile results are produced. Ultimately, blindly following a tier list is rarely the best method, however, if you really enjoy using them then you will always be willing to spend the extra time that is required to learn them. To that end, fun is always critical, after all Tekken is at its core, a video game.

This is a key concept in Tekken, one you will need to etch into your muscle memory. Knowing your standing and WS (While Standing) launchers will help your odds in defeating your opponent. Most characters will have a hopkick or DF2 at 15f where you will be able to launch certain moves that are -15. Below 15f you will still need to understand the options your character has so you can squeeze out as much damage as you can with each opening presented. A good example of this would be using Feng’s 1,2,2 (10f Standing Punisher) as a punisher for -15 and below. The go to punisher for Feng against moves that are -13 or -14 would be B1+2. This can lead into KND (Knockdown) status for the opponent as well as a chunk of damage knocked off the health bar compared to 1,2,2. This would also open up Feng’s Okizeme game and force the opponent into a bad situation. Even when you find a good punish, always be on the lookout for what could potentially do even more damage in that scenario.

The next step in this process would be to find the key moves for your chosen character. This can be found in several ways, either via group chats like discord or whatsapp, forums such as Tekken Zaibatsu and Reddit or by watching high level players via YouTube or streams. The latter tends to be a more natural and comprehensive way of learning key moves and understanding their utility in a game. The reason for this would be because we are able to see these moves being demonstrated perfectly in real matches. Key moves are usually moves that can be linked with an offensive strategy. For example, Jack has two great offensive utilities that link into each other very well. His DF2 tracks to his right and his FF1 tracks to his left. This means that the opponent facing jack is in a constant struggle. Choosing to not play into the meta of these two games and stay linear will open up the opponent to be chipped down with DB1 and FC DB1. That latter two can also be used in neutral as a great low poke even if the opponent isn’t trying to negate DF2 and FF1.

After learning your key moves you can now delve into learning combos from every launcher, CH launcher, low parry and float. Each of these types of combos will increase in difficulty when you want to maximise damage. The combos can also be altered to present you with Okizeme options, wall carry, wall breaks, balcony breaks and floor breaks. Okizeme is a Japanese term referring to attacking the opponent while they are recovering from a knockdown. This is one of your biggest opportunities to capitalise on the opponent’s disadvantaged state and go for more damage. Regarding what combos you can start your offence with, there is a very complete breakdown of the different bread and butter combos your character can perform on YouTube, credit to LegendaryMihawk. Whilst this combo guide is in no way complete (Tekken is a complicated game with many variables), it does present a lot of ideas and staple combos and should get you flying out of the starting blocks.

Tekken is a 3D game which means that there will be times where you will launch your opponent off axis, this means that you will need to adjust your combo to make sure you don’t miss out on any damage. Off axis combos are usually done with a decrease in damage, some characters can get a lot of damage from launching BT (Back Turned) opponents but this isn’t universal across the board of characters.

Casual Player’s Can Stop Here.
The next few sections will be more technical and aimed at players that are aiming to cause damage in the competitive scene or amongst their diehard tekken friends. We will be discussing frame data, properties for different moves, throw breaking, as well as specific options your character might have.

Frame data is an important concept in Tekken. It’s basically the framework in which the moves work and the mathematical law they are forced to abide by within the game world. Understanding the frames of each move is important after a certain point but not so much in the beginning. Overcomplicating things with frame data too early can mar your progress everywhere and can also leave playing in a very predictable manner. Allow your natural instincts to guide your gameplay at first, and get used to understanding an opponent’s mind through your own thought process before linking to the numbers.

Whilst it is important to understand whether you are at an advantage or disadvantage, making a decision solely based on frame data would be like attempting to solve a Rubix Cube by only looking at one side. Other variables can come into play such as the opponents playstyle, your strategy, crushing moves, evasive properties, movement and throws. For example, Yoshimitsu can have his DF1 blocked and be left at -5 which is a significant disadvantage in Tekken. The opponent (Let’s say they are using Ling) can then immediately attack Yoshimitsu with a DB4 and get launched with Yoshimitsu immediately using UF3 (Hopknee). This happens because of the intricate crushing system that is in place. Hopknee has active low crush frames which would negate Ling’s DB4. This type of play is generally classified as risky because Ling could have opted to either backdash and whiff punish, stand still and block punish or possibly AOP~d which would have crushed under Yoshimitsu’s low crush UF3.

Whilst it is incredibly important to understand the position you are in when it comes to being able to move or press buttons, you also need to consider other options. Frame data is only one idea in a complex game.

A good example of this would be Dragunov. His WR2 (While Running) is an offensive utility that is weak to SWL (Sidewalk Left). If the opponent begins to SWL then that negates this move, a good player will be able to notice this and start using moves that track to WR2’s weak side to catch the opponent off guard. In Dragunov’s case, this would be QCF1, a high launcher that tracks to the opponent’s left. The opponent might then realise this and begin to SWL and twitch duck to duck under QCF1 and step WR2. Several layers of meta can be built on top of each other with high level Tekken to constantly adapt and stay one step ahead of the opponent. In most cases, high level players often mix up the timing and rhythm of their gameplay so that their moves are more effective as they become more unpredictable. It is much harder to step random WR2’s compared to an opponent who always uses this move in range 1-2.

Newcomers to Tekken will have not learnt the intricacies of throw breaking in previous Tekken’s. This aspect of the game has been simplified which is a good thing for newcomers but also creates an opportunity for grapple characters to mix up their opponents with non stop throws. Throw breaking in Tekken at high level has traditionally required you to see which hand is coming forward first and responding within a short space of time with the correct break to prevent being thrown. If the left hand came forward first it would be broken with 1, if it was the right then 2 would break the throw. If both hands came forwards together it was generally 1+2 together to break the throw. This aspect of the game still exists with certain characters such as King, Devil Jin, Dragunov, Ling, Law and many others. Whilst its important for your defensive strategy to break these throws it’s also important to understand what situation you would be left in if your opponent does or does not break the throw. This aspect of the game ties in to what your opponent might want to do, a King player with his back to the wall might opt for giant swing knowing that it will lead into massive damage and a wall splat (a wall splat that cant be followed up on). The interesting part about this would be that the King player might anticipate the opponent knowing this and opt for another option that the opponent hasn’t considered.

As a serious player you should know which of your throws switch your side with the opponent on break as well as if the throw hits. Being able to hone in on your opponents weakness in a tournament game is essential too. Some might call it cheap if you were to defeat them with relentless throws. However, throwing is a legit part of the game and can prepared for like anything else.

Certain characters have stances or moves that totally negate mix ups and frame advantage. A typical example of this would be Yoshimitsu’s flash. A move that has an incredibly fast startup (6f, 4f faster than the fastest move in the game for most of the cast). Not every character will have something like this but your character will definitely have some utility to offset an opponents offense. There are rare examples such as Kazuya who doesn’t really have any ‘panic’ moves and would solely rely on movement and defence. A few examples of characters that can evade or crush through an offence would be Feng, Ling, Steve and Eddy. These characters have very good tools to totally avoid moves. Other characters can opt for crushing or armour moves which would mean you sacrifice some health to take damage but it’s more than enough to make the opponent think twice before trying that mix up again.

Keep up to date with all of the ESL fighting game movements on our Fighting Game Twitter, our Street Fighter and our Tekken pages also.