“Halo is just… as soon as it starts, it’s crazy until it ends”: Goldenboy, Bravo and Team DZS on Halo 2’s return to eSports

Remastering a classic game can delight old fans and win over new ones, or it can go disastrously wrong. However, 343 Industries have not disappointed. Halo 2: Anniversary is part of the upcoming Master Chief Collection, a remastering of all the numbered Halo titles to date. Although the game is not yet released, ESL partnered with 343 Industries to deliver a Halo 2: Anniversary tournament at gamescom.

With the Halo: The Master Chief Collection PAX Prime Showdown coming up this weekend, it’s a good time to reflect on the showdown at gamescom, so our reporter Eliot Miller caught up with some of the casters and teams who participated.

An interview with the casters

Recently I got the opportunity to speak with the Andy “Bravo” Dudynsky, franchise community manager at 343 Industries, and Alex “Goldenboy” Mendez, the commentary team for the Halo 2 gamescom showdown. Here’s what they had to say… 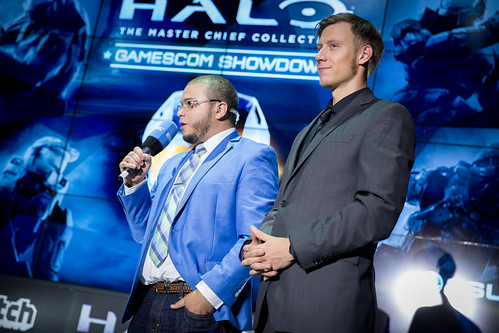 Eliot: So first of all guys, do you think the event was successful?
Goldenboy: Yeah, I definitely think it was. The lines were always crazy at the Xbox booth – where I was.
Bravo: Our lines [at the gamescom showdown booth] were packed! We had forty people in line in a space that should’ve only had ten people in line at all times Wednesday through Saturday.

Eliot: I really liked that anyone could come and compete here at gamescom – how do you think that affected the tournament, positively or negatively?
Bravo: Oh I think it was a huge positive! I think really the whole story of eSports is that anyone, if they are good enough at the game and can find three players who are like-minded, can rise into the scene.

I think that was one of the things that first got me into competitive gaming – the idea that I could, all of sudden, start playing with some of the best players in the world. That’s something we wanted to be able to do here, say: “Hey Europe, show up with your best squad, and you can be on the stage.”
Goldenboy: Every pro had to start somewhere. Every pro or new player had to start from the bottom. So it’s great to see that kind of feeling has still not been lost, and Halo continues to maintain that. 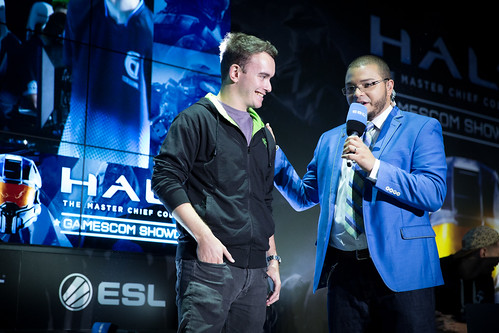 Eliot: Personally, though, I was concerned that the four qualified teams would just be ‘cannon fodder’ for the professional teams. Did that play out in the tournament at all?
Bravo: To an extent. We had a few 2-0s, but we also had a 2-0 from the qualified team. DZS won 2-0 against team Vibe, who are a team of veteran UK and Norwegian Halo players, but DZS, who were a team who qualified from the community, just stepped onto the stage here at gamescom. They made a name for themselves today.
Goldenboy: I’m glad that that happened. I mean, you look at the bracket and everything is like 2-0, 2-0, 2-0, but that really doesn’t tell the whole story.

In the first game, which was TCM vs. Symphony of God (another qualified team), TCM was actually in a really close game with SoG for a very long time, and then they were finally able to peel away the win. That just kept on happening. If anyone looks at the bracket, that shouldn’t fool them – these were some crazy close games. 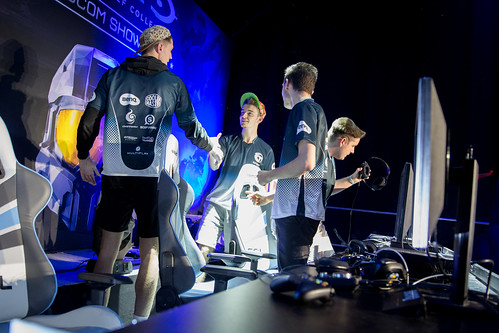 Eliot: I had a chance to play the new Halo 2: Anniversary – it’s been years but immediately the muscle memory came back to me. Obviously it’s important for the teams that the game still plays like Halo 2, but are there any differences?
Goldenboy: The game is still the same game, and I agree with you – as soon as I grabbed the controller for the first time and we started to play, it felt exactly like Halo 2

The game has hit markers now. I don’t really think that’s a huge determinant in my personal opinion – if anything, it helps us casters know if there was a connection with the hit or not, so I actually really prefer that. There’s also grenade indicators, too, but I honestly do not see that being a big deal at all.
Bravo: A big goal is to make Halo 2: Anniversary feel like Halo 2, and also feel like a proper anniversary edition of the game.

Our partners at Certain Affinity, who are helping us with Halo 2: Anniversary multiplayer, have one guiding light which is: if a change is to be made, it has to improve gameplay. 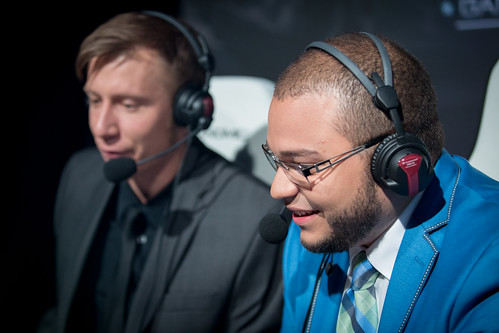 Eliot: You have spoken before about some of the new game modes you have been slowly introducing to the game. For example, the finals was a ‘Team Snipers’ game. Can you tell us more about that decision?
Bravo: I think having Team Snipers was great. The inspiration for including Snipers in the tournament was that in 2005, shortly after Halo 2 released, the competitive circuit saw Sanctuary Team Snipers as its own game type, with sniper rifle primary and battle rifle secondary.

We thought we’d bring it back! We only have a few maps that we’ve already announced, so we wanted to make sure we had a lot of variety in the tournament. I think it turned out awesome. What do you think, Alex?
Goldenboy: I agree, it was pretty fun – it was half the time of a regular Team Slayer on Sanctuary! But, that’s the thing about these guys – they are some of the best players in Europe. They just went at it, which was awesome to see.

Eliot: Are there plans to introduce any other game modes?
Bravo: I think largely for Halo 2: Anniversary we are planning on bringing back the golden list of game types: CTF, Oddball and the occasional King of the Hill.
Goldenboy: I would love to see a multi-Halo tournament with the Master Chief Collection one day, just for fun, where each part of the bracket is a different Halo – how crazy would that be? 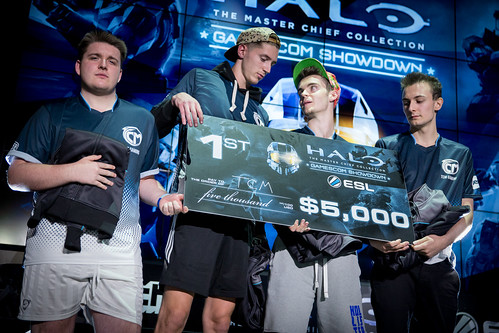 Eliot: Obviously there’s a lot that goes into running an eSports tournament – what kind of challenges did you face in setting up this one?
Bravo: We knew that we wanted to do something cool for gamescom, and working with the ESL crew has been incredible. One of the challenges for our team is that this is a pre-launch version of the Master Chief Collection, so we’re running in development environments. It is not the final product.

However, we wouldn’t come to gamescom unless we could create the best tournament, and the most legitimate tournament to showcase the game, because we want to stay true to the competitive nature of Halo.

This was true, there was the occasional bug, some brief issues with sound, and at one point a player’s name-tag could briefly been seen through a wall. However, this did not affect the tournament overall, and it is a testament to everyone involved that the tournament ran as smoothly as it did.

A team making a name for themselves

I caught up with Tomas (“BlizZ”), David (“Triczr”) and Jobst (“Jobst”) of Team DZS, a team from Germany who came through the qualifiers and made it to the semifinals before being eliminated by TCM, who went on to win the tournament. 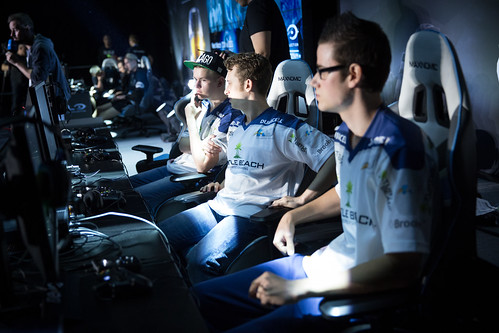 From left to right: David, Jobst and Tomas

They explained to me that their lineup for the tournament was very new as one of their players had to drop out at the last minute. Jobst, captain of team Mean Machines, was their substitute.  The whole team had only having been practicing together for the last five days before gamescom.

I asked them about their experience at the gamescom showdown.

Tomas: Top four, top bracket. We met TCM in the semifinals – they were the best team today. Maybe we could get to the final if we met another team, but GG. 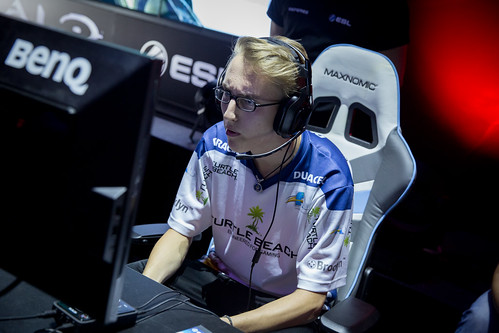 Jobst: We won 13 games, I think.
Tomas: When one of our teammates couldn’t come here because of some ‘real-life’ problems, we picked up Jobst, and it was a good pickup!
David: This is my first time playing Halo 2. I have played Halo 3 since 2008, but this tournament, man, was one of the biggest tournaments I’ve played.

When I asked them about what was next for them, David and Tomas said they hoped to compete in more tournaments in Germany and Europe, while Jobst hoped to go with his regular team Mean Machines to the USA and compete in MLG, with the aim of finishing in the top thirteen.

They also shared their thoughts on the future of Halo 2 as an eSport with me:

Jobst: In Halo: Reach and Halo 4, there was a little depression. They were not what Halo 3 and Halo 2 players wanted to play. I think in the classic version of Halo 2, there are many, many people coming back – many pros from USA and Europe want to play this game.
Tomas: I think gamescom is a good promotional opportunity for the new Halo game. I think tourneys will come back, and Halo will be bigger in the future. 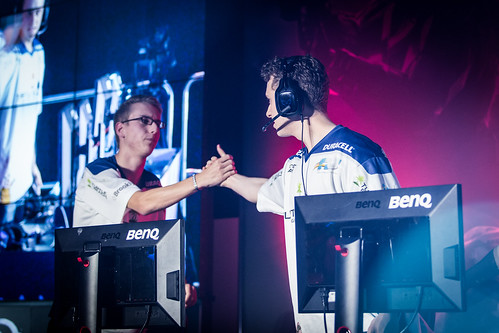 Halo 2 is back and it’s better than ever

Halo 2: Anniversary is not just a graphics update for an old game – it’s a return to form for the competitive Halo scene. It’s what the players want to play and what the fans want to watch, and gamescom showdown certainly showed that.

On a final note, Alex “Goldenboy” Mendez, shared his passion for Halo 2 as a spectator sport with us:

“Console gaming was never traditionally seen as an eSport a couple years ago, and then Halo was really that first game that took it to that level, to really say: “Hey listen, this is here, it’s awesome, it’s fun to watch. That’s the thing about Halo – it’s an arena shooter, so it’s very very fast-paced and it’s just constant intensity from start to finish. Halo is just… as soon as it starts, it’s crazy until it ends.”

This weekend at PAX Prime, 343 Industries and ESL will be teaming up again along with Twitch for another Halo 2 showdown, with Bravo and Goldenboy returning to cast the matches. For more information, check out the Halo: The Master Chief Collection PAX Prime Showdown page!